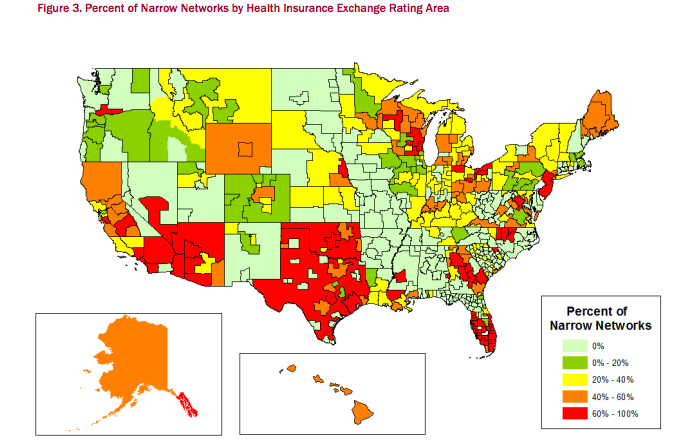 Enrollees in several states face a severe lack of options in physician networks for plans offered on the ObamaCare exchanges, according to a brief released on Monday by the Leonard David Institute of Health Economics and the Robert Wood Johnson Foundation. Limited physician networks is a part of the health insurance industry's effort to mitigate mandates in the so-called Affordable Care Act that have increased costs.

For consumers, some of whom may have already lost the doctor when their pre-ObamaCare coverage was canceled, the lack of physicians in a provider network can be a headache. Unfortunately, it is commonplace as a result of the law. The Leonard David Institute of Health Economics and the Robert Wood Johnson Foundation looked at Silver plans available in all 50 states and the District of Columbia in 2014 and compared the provider networks available. Researchers found several states that had a high percentage of ObamaCare plans with limited physician networks, defined as 25 or fewer doctors available on the network.

"In the new health insurance marketplaces, insurers have limited options for offering plans at different price points within a metal tier. ACAmandated changes — such as community rating, standardized benefits, and removing limits on annual or lifetime benefits — mean that insurers must find other strategies for offering lower-cost plans," the brief explains. "Narrow provider networks have emerged as one of the only remaining pieces in the insurers’ cost-containment toolbox."

This is not a new phenomenon. Limited networks were noticed not long after the first ObamaCare open enrollment period began in October 2013. Polling conducted not long after suggested that consumers were not keen on the idea of lower premiums as a trade-off for limited networks. As the brief notes, the practice is not transparent, and that probably will not change.

"it is difficult for regulators to judge the adequacy of the provider network, something that the ACA requires. The federal standards require networks to have sufficient numbers and types of providers to deliver services without 'unreasonable delay,' though 'unreasonable' is left to the states to define," the brief notes. "According to the Commonwealth Fund, states vary in the standards they set based on maximum travel times, appointment wait times, provider-to-enrollee ratios, or extended hours required. The data challenges also make enforcement of these regulations a challenge for regulators."

Insurers have used this practice before, but the market is much different now with ObamaCare. Because of costly provisions of the law, insurers have had to rely on narrow networks more to stay competitive in the marketplace. It is just another problem with ObamaCare, which have piled up on consumers, but it is one that cannot simply be "fixed" through a legislative tweak. Real alternatives are needed to replace ObamaCare with the relationships of consumers and their doctors in mind.

Learn more about our partnership with Physicians for Reform
Tags ObamaCare, doctors, physicians, physician network
Log in or register to post comments.
1 comments

NO KIDDING! Because of the economy and the scarcity of local jobs I was forced to sign-up for Obamacare last December. I was lucky to find a GP who was not "filled-up" with such patients after a 2 month search for ANY physician with an opening for this form of "Government Cheese".
I have been made acutely aware for the past 25 years of the following great from the Federalist Papers contributor (later 4th U.S.) James Madison regarding such ideas:
"If Congress can employ money indefinitely to the general welfare,
and are the sole and supreme judges of the general welfare,
they may take the care of religion into their own hands;
they may appoint teachers in every State, county and parish
and pay them out of their public treasury;
they may take into their own hands the education of children,
establishing in like manner schools throughout the Union;
they may assume the provision of the poor;
they may undertake the regulation of all roads other than post-roads;
in short, every thing, from the highest object of state legislation
down to the most minute object of police,
would be thrown under the power of Congress.... Were the power
of Congress to be established in the latitude contended for,
it would subvert the very foundations, and transmute the very nature
of the limited Government established by the people of America."