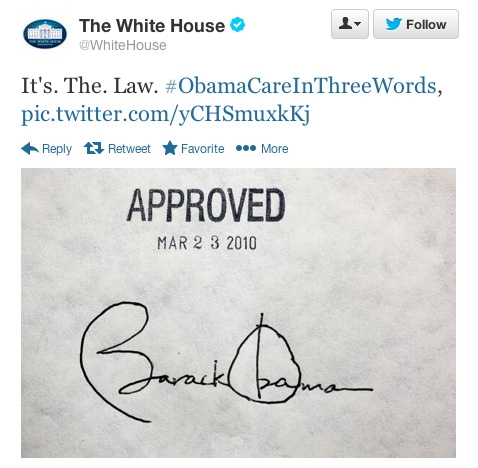 Since then, "it's the law" has been a favorite Democratic talking point on why Obamacare is somehow impossible to repeal. The President doubled down on this novel theory in his comments Monday:

Unfortunately for the American Left, the fact that Obamacare is currently law has little bearing on whether all of it will continue to be. American history is filled with examples of laws that have been changed, overridden and repealed.

And as long as we’re “being clear,” those of us on the right know that Obamacare is the law of the land, which is why we’re working so hard to change that fact. The wildly unpopular legislation will impose a nightmare of costs, complications, regulations and pain to a broad spectrum of Americans. Doctors hate it, insurance companies avoid it, medical manufacturers are laying off employees, unions are screaming about it, and average citizens have thrown up their hands in despair.

Smug Democrats who mock these concerned Americans are ignoring countless other laws which have gone the way of eight-track tapes, rotary-dial phones and Hypercolor shirts.

The Defense of Marriage Act was far more popular than Obamacare and it, too, was the law. The Supreme Court struck down a key part of the legislation to cheers from many of the same Democrats scolding the GOP today. In the 1990s, bipartisan majorities in Congress reformed it’s-the-law welfare programs to require work and add accountability. Prohibition was overturned despite it being backed by a Constitutional Amendment.

And let’s not forget that the federal debt limit itself is the law of the land. Of course that doesn’t stop spendthrift politicians from trying to overturn it year after year after year.

What makes this argument worse is its hypocrisy. Barack Obama himself has unilaterally delayed and altered huge swathes of this law when he found doing so politically expedient.

Mr. President, we know that It’s. The. Law. But many of us won’t rest until that is no longer the case.

I GAG WHEN OBAMA SAYS "IT'S THE LAW." HE CHERRY PICKS LAWS ALL THE TIME. HE CHERRY PICKS THIS LAW. SLAVERY WAS A LAW. NOT ALL LAWS ARE GOOD -
OBAMACARE IS BAD IT IS CONTROLCARE