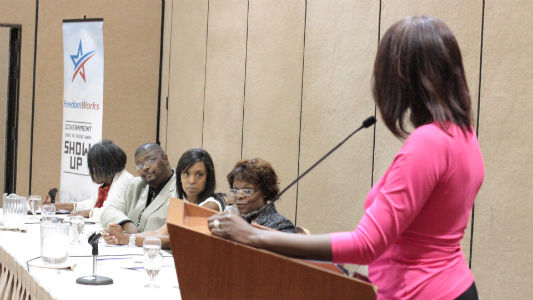 Think of it, the NAACP’s leadership is blacklisting blacks who have different ideas about the role of government in our lives. Tragically, this once venerable organization that sought to advance all blacks now segregates blacks based on political views. If you are a black liberal you get to sit at the counter – you get a voice, but if you are a black conservative you sit outside.

The issues facing the black community are too serious to ignore, however, which is why we gathered on Monday to address them head on.

We believe empowering individuals is the best path for prosperity. The NAACP believes in empowering the state. It’s a model that has been tried, and that hasn’t worked.

For far too long, the black community has lagged behind other demographic groups in the U.S.

Blacks suffer from sky-high unemployment rates, now at 10.7 percent; blacks have the lowest average incomes; black children are trapped in failing public schools, and are the victims of deplorable crime ridden urban areas like Chicago.

For far too long, organizations like the NAACP have witnessed these horrible trends and they have not changed course. Instead, the NAACP stubbornly sticks to liberal policies and politicians despite their proven failures. Instead of challenging these losing policies, the NAACP promotes them.

Instead of embracing school choice the NAACP rallies against it, supporting the government monopoly that sets our children up for failure.

Black families with lowest average incomes are hardest hit by rising energy prices, yet instead of promoting the cheapest forms of energy, the NAACP rallies against them, promoting the president’s policies that he admits will cause electricity costs to skyrocket.

Even though we were denied a speaking slot at the NAACP for the second year in a row, FreedomWorks was pleased to be able to set up a booth in the exhibit hall where we were able to interact directly with activists and address some of the concerns the NAACP refused to touch.

Each of the panelists appearing at the summit - myself, Rev. C. L. Bryant, Brenda Flank, Lesli Brower, and Wayne Dupree - has been verbally attacked for their views. I’ve been called a House Negro, Aunt Jemima , a sell-out, a traitor and worse. But the NAACP leadership does not defend black conservatives. No, the group criticizes them.

After reading about the two of you on the interning I can see why the NAACP wanted nothing to do with you.

You are both right wing nuts, a disgrace to call y our selves "black Americans".

What a sad comment by kanawah. Why don't you get your head out of the sand, and stand up for your people? Have you ever heard of the words "useful idiot"? Well that is what Obama, and all of his Progressive friends believe you are! You see...they follow the words, and ideals, of Saul Alinsky (a Marxist)...from the book "Rules for Radicals" of which Obama is a student. He has used that book since he was a Community Organizer.
Open your eyes...read the book. Find out what he has done to you, and your people...actually ALL the people of the USA.

On Saturday, May 16, FreedomWorks hosted two Empower Panel Discussion Events in Northeastern North Carolina. The first event was held at 11:00 a.m. at the Eastern NC and VA Assembly Church of Christ in Roper, NC. Panelists included: