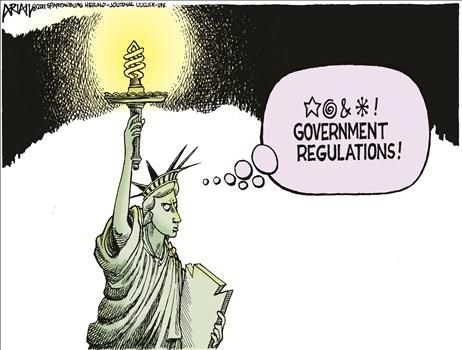 Welcome to FreedomWorks Foundation’s seventh regulatory review! Our Regulatory Action Center proudly updates you with our favorite tidbits from the swamp. We want to smash barriers between bureaucracy and the American people by delivering regulatory news straight to FreedomWorks activists. Check back in two Fridays for the next edition.

1) Video of the Week: Quartz explains the tradeoffs with the North American Free Trade Agreement, a trade deal that made the United States much richer but is reviled by politicians. Yes, some people lost jobs in concentrated areas, but the United States gets cheaper products and job growth as a whole.

2) Statistic of the Week: In 2017, the Federal Register contained a 61,308 pages of regulation, a 36% drop from President Obama’s 95,894 pages in 2016! The drop shows that the Trump administration is working hard to slash the size of government. This page count is a record low since 1993. You can read the Competitive Enterprise Institute’s report on government’s $1.9 trillion worth in federal regulations below.

3) Trump’s Executive Order on welfare will be huge. President Trump’s push for welfare reform will force federal agencies to review 89 welfare programs administered by the US government. Their contributions towards improving employment, self-sufficiency, nutrition, and social development will be assessed to determine the usefulness of certain programs. Trump’s welfare reform plan will also find ways to add work requirements where they’re currently unenforced.

4) Transportation regulations are stalled under Trump & Chao. Department of Transportation Secretary Elaine Chao is stalling and removing costly Obama-era regulations. While Axios reporting leans towards pro-government liberal bias, it includes a comprehensive list of rules scrapped by the Trump admin. Companies adopt safety rules on their own regard to ensure safety of workers and assets. They don’t need Obama’s costly ideas in the mix.

5) Secret Science is a far-left deception. Bureaucrats at the Environmental Protection Agency (EPA) use “secret science” to shroud politically motivated policy as “evidence-based” and “smart” regulations. But these regulations are unsubstantiated and career leftists keep their “science” unavailable to the public. EPA Administrator Scott Pruitt is ending secret science and the lies behind it.

6) Obama’s “zombie” regulations kill coal power plants even as Trump removes them. The Heartland Institute describes how the Clean Power Plan and an EPA rule on mercury emissions wreck coal, even as America moves on from these harmful policies.

8) California lawsuit against EPA seeks to keep poor Americans poor. The state of California filed a lawsuit against EPA administrator Scott Pruitt’s push to reduce fuel-efficiency standards for automobiles. Economists understand that fuel efficiency standards are regressive taxes that hurt poor Americans the most. Pruitt made the right move by attempting to reduce them.

9) A new FDA regulation could hurt small businesses. Food and Drug Administration (FDA) Commissioner Scott Gottlieb may move forward with a regulation proposed by the Obama administration on food businesses. Small business like pizza stores may be required to list calorie contents for their foods on placards, a costly endeavor.