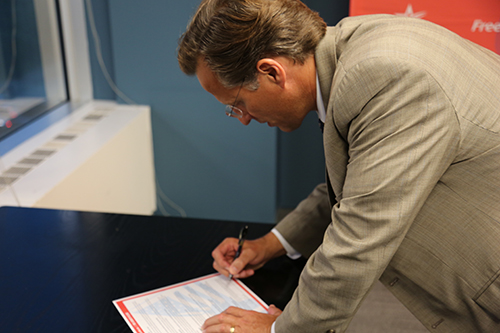 “FreedomWorks’ Pro-Growth Pledge embodies the free market principles that I believe can boost our economy and benefit every American. I’ve worked in Congress to advance policies that will get our economy moving in the right direction,” said Rep. Dave Brat (R-Va.). “We need a tax code that is simple and encourages entrepreneurship and investment. We must rein in the executive branch, restore the separation of ours, and keep unelected bureaucrats off the backs of Americans. We must repeal ObamaCare and replace it with policies that respect patients and doctors and truly make health coverage affordable for families.”

“I want to thank FreedomWorks for its efforts on this pledge and what they’re doing to educate and train conservative activists to fight for the cause of freedom,” Rep. Brat added.

“Two years ago, Rep. Brat shocked the political world when he defeated Eric Cantor. Voters responded to his message of fiscal conservatism and free markets. Since entering the House, Rep. Brat has fought for pro-growth policies. He knows that crippling taxes and heavy regulatory burdens are hurting businesses and constituents in his district,” said FreedomWorks CEO Adam Brandon. “By signing FreedomWorks’ Pro-Growth Pledge, Rep. Brat is showing that he will continue to pursue policies that will get the federal government out of the way and let Americans innovate and reestablish our nation as the economic leader of the world.”

On behalf of our activist community, I urge you to contact your representative and him or her to support the Health Savings Account Expansion Act, H.R. 247, introduced by Rep. Dave Brat (R-Va.). The bill would increase contribution limits for health savings accounts (HSAs) and would, for the first time, allow consumers to pay insurance premiums from their HSAs.