There is a big difference between getting out the vote for a campaign and doing it as a political party's Precinct Committeeman, or PC. A PC is in the fight for the long haul, not just getting people to the polls, but winning friends, making converts, and changing the culture of their neighborhood. 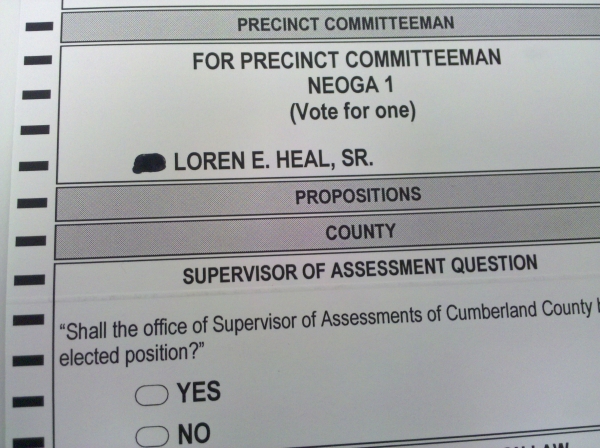 In many states, PCs are elected by the primary voters. For Republican PCs in Illinois, for instance, 10 signatures of Republican primary voters in the precinct are required for ballot access. Illinoisians desiring to be on the ballot in the 2014 primary must submit their petitions to their County Clerk by December 2, 2013.

Precinct Committeemen use the need to collect signatures as an excuse to contact voters. Knocking on doors to collect signatures helps to find voters who are new to the precinct. If there are multiple candidates for some office, the PC can carry ballot access petitions for all of them, helping, without pressure, to find out which candidate voters in the precinct support.

Since a PC can't remember the voting preferences of all the people even in one precinct, about 1,000 voters, we use some kind of software. Typically the state party will maintain a database tool, so check with your local committee. One would expect the national parties to each settle on their own data collection and vote turnout tool.

Voter Turnout Is Everything

Roughly 80% of our Congressional Districts are considered "safe" for one party or the other. Only 35 seats are truly competitive. That mean that for almost all of Congress, the primary is the election that matters. The ruling club in DC tries to discourage primary challenges.

There are always close races that are won or lost on GOTV:

In 2012, most voters reported that no Republican contacted them. There was a ton of money spent on TV ads that voters quickly tuned out, but no one showed up at their door to counter the various leftist narratives of racism, sexism, and class warfare.

We cannot rely on campaigns to contact voters and get them to the polls. Even when they do it, they typically overwhelm some "battleground" areas and ignore vast swaths of the electorate. Campaigns have to do that.

One precinct committeeman wrote with with his success story. He and his team got almost 87% of Republicans to the polls in the 2012 general election:

One of the reasons we were so successful in our turnout efforts in my precinct was because of the early ballots.  Every few days, after the ballots went out by mail, the Elections Dept. would give our county Party a spreadsheet, by precinct, of those ballots that had already been received.  That list of names was then sent to the precinct captains, who then distributed to the PCs.  Then they could cross those names off their call lists.

The key to why Precinct Committeemen are essential is that they can be everywhere. Being a flesh-and-blood person, the PC can reassure voters that what seems to be nonsense on the news really is nonsense and get them to the polls.

Above all, contacting voters face-to-face allows the PC to listen. There is nothing like talking to people who don't pay attention to politics to help understand their concerns.

In contacting people door-to-door, approximately 1 in 10 voters you talk to will change their vote because of it. That's actually a very good rate of return. If there are 10 races on the ballot, and 1 in 10 people you contact votes because of you, that means on average every contact means a vote for some Republican on the ballot.

A PC contacting people in his own neighborhood is not limited to knocking on doors. He can, and should visit churches, ball games, picnics, parking lots....anywhere people are. The PC should hold backyard cookouts when weather permits, and not even push political discussion unless it comes up. Build relationships; they matter.  After several years of this, a nod and a smile around election time is all many voters need to let them know someone notices when they vote. A telephone call can be even more effective if a relationship is built over time.

The key factors in increasing voter turnout are contested elections, contested ideas on the ballot, and voting being culturally expected. The lack of those and the presence of negative campaign ads depress turnout. The PC makes voting part of the culture of the community.

People react best to a message from someone with whom they share a common bond. People who look, speak, and dress the way a voter does will be more successful delivering a message. Local people contacting local people are therefore much more effective than teams swooping in from outside.

When you can say, "Hi, I'm your neighbor and I live in that blue house over there," you set the voter at ease. They are ready to hear you -- especially if you start off listening.

You don't have to be the PC in your precinct, as long as you make sure someone fills the role. We each have our own skills.  But don't let your physical limitations or personal shyness get in the way.  While it is good for the PC to knock on doors, every PC should also gather a team to help with the legwork.

Contact your local party chairman, and start knocking on doors. If every conservative took care of their own back yard, we'd be far ahead of where we are today.