It is encouraging to hear RNC Chair Reince Priebus state that the GOP is “totally on board with Rand Paul.” Rand, of course, is a very popular leader in the GOP, especially among the youth. The 100 page “autopsy” also recognizes the need to reach out to other demographics including women and minorities. This is certainly true; however, the solutions stated in the RNC report are not going to bring about the desperately needed fresh blood the GOP is looking for.

Solutions from the RNC “autopsy” on reaching out to the youth: 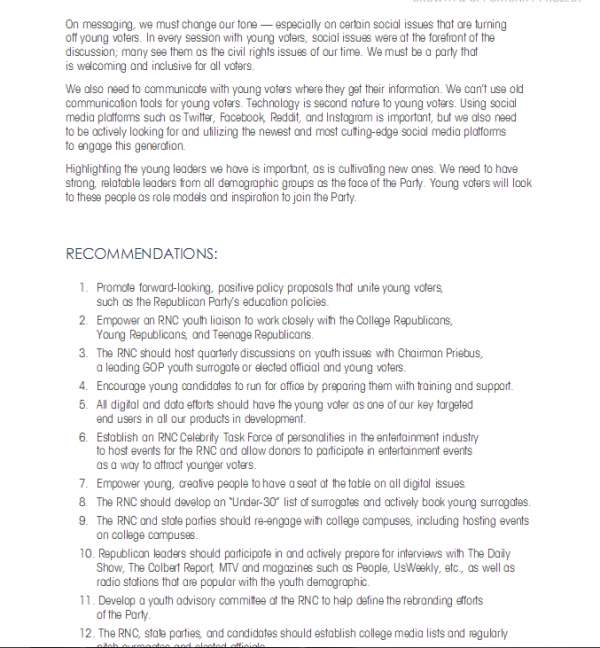 Liberty is fun; it’s a sexy message. That’s why tens of thousands of students across the country join Young Americans for Liberty and Students for Liberty and work tirelessly to promote liberty on their college campuses. On the other hand, if you are having quarterly meetings with RNC Chair Reince Priebus- you’re doing it wrong. That sounds like punishment.

One of the recommendations is to create a "Celebrity Taskforce." Creating such a thing will do nothing but get you trolled on the shows you want to be part of, like Colbert. I find it hard to believe a popular celebrity will want to be on an “RNC Celebrity Taskforce.” If that doesn’t sound like a top-down bland approach to attract young people, I’m not sure what does. Vince Vaughn is a popular celebrity, and he was influenced toward libertarianism because of ideas, like ending the Fed, not being part of the RNC. Ideas will win out over stale party brands every day.

Furthermore, most “Republican Leaders” are the problem. When Speaker Boehner removed popular Republicans like Representatives Amash and Schweikert from their committees, it infuriated young libertarians who are trying to change the GOP for the better. That’s exactly what “Republican Leaders” shouldn’t do. To make sure this doesn’t happen in the future, the GOP needs to embrace the libertarian leaning Republicans like Amash, Massie, Schweikert, Paul, and others and allow them to become the leaders that they are.

FreedomWorks understands that changing the GOP will come from fresh ideas outside of the party and having a larger impact in the cultural space. That is why we held a Spring Break Youth Summit on March 9th -  12th.  Over 70 students from more than 30 states gathered in Washington DC for the weekend to attend the very first FreedomWorks event of its kind. Instead of lecturing to the students about the Republican Party, the RNC, or divisive social issues; participants talked about ideas, culture and how we can influence young people who are not yet part of our movement. Messaging and reaching out to the un-tapped youth who are politically homeless is key to winning the future. It was a learning experience from both sides of the aisle.

If the RNC wants to reach out to women, minorities, and the youth, they need to make it less about being a Republican or part of the RNC, and more about ideas. Ideas are what inspire people, hint-hint- Ron Paul. When young people are empowered and energized by ideas, they'll run for office or become part of this movement at some level. The RNC and the GOP are not going to change by themselves, we need to actively work to restore the values and ideas that once were the guiding princples of our party: Individual Liberty and Limited Government.

I don't understand why Paul Ryan wants to thought of as the guy that cuts services, when his budget isn't really that different from the Democratic one. He is getting all the downside of a guy "gutting" govt, with none of the upside of actually proposing it. It would be better to be the guy of "lean" government.

I found this line in the beginning especially egregious:

Instead of driving around in circles on an ideological cul-de-sac, we need a Party whose brand of conservatism invites and inspires new people to visit us.

In other words, don't examine our philosophy or our internal hypocrisy, or our big-governemnt tendencies and abandonment of the constitution, no no no, that is all idealogical time wasting. We need to just rebrand ourselves instead.

In developing the Growth and Opportunity Project's Autopsy of the 2012 election (pdf), the Republican National Committee correctly identified the reason for the party's loss, but failed to recommend a coherent strategy to reverse it.The report endorses primaries, campaign finance reform, and recommends various ways outside groups can get involved. Some of it's good, some of it's not so good, but in the end it's a half measure where a radical change is needed.

0
04/01/2013
The RNC Diagnosis: Part 2 - Get Out The Vote
"https:\/\/www.freedomworks.org\/content\/rnc-diagnosis-part-2-get-out-vote?social=facebook_share"
null
https://fw-d7-freedomworks-org.s3.amazonaws.com/styles/thumbnail/s3/te_social_media_share/fw_default_0.jpg?itok=35IWEBMb
Blog

Joining me today on The FreedomCast, Stephen Green, Denver Editor of PJ Media and I discuss the GOP brand, the role of the small “l” libertarian and if it’s time for the RNC to go the way of the dinosaurs. Have a suggestion for an upcoming FreedomCast episode, or a comment?

On today’s edition of The FreedomCast, my producer Brad Jackson hijacks my podcast to interview me about BlogCon2013, the importance of bloggers and how FreedomWorks has embraced the new media movement.

0
03/05/2013
Republicans Want to Give Obama More Power? Why Do We Lose Elections?
"https:\/\/www.freedomworks.org\/content\/republicans-want-give-obama-more-power-why-do-we-lose-elections?social=facebook_share"
null
https://fw-d7-freedomworks-org.s3.amazonaws.com/styles/thumbnail/s3/te_social_media_share/fw_default_0.jpg?itok=35IWEBMb
Blog

Republicans Want to Give Obama More Power? Why Do We Lose Elections?

In the constant stream of pixels, ions, electrons and hot air that passes by at a constant and overwhelming rate that is akin to the speed of light, two articles caught my attention on Wednesday. The latest waste of attention is on the looming sequester cuts that are set to hit on Friday, that would have the 'devastating' effect of cutting $85 Billion in budget increases from a non-budget that is already over a trillion in the hole.

On the weekend of February 15th-17th 2013, the up-and-coming activist group Students for Liberty hosted their 2013 International Students for Liberty Conference (ISFLC) in downtown Washington D.C. With over 1,200 attendees, the event was dedicated to students advancing liberty on college campuses nationwide. Featuring prominent liberty advocates including John Stossel and John Mackey, the weekend was filled with strategy sessions for young students looking to promote the cause of economic freedom at their respective universities.