Schools Continue to Bully Our Children

Despite the persistent objections of parents and the lack of medical evidence that there is any value to their efforts, public schools are still sending children home with fat-shaming letters for their parents.  One school in upstate New York is continuing the controversial practice - even letting fellow classmates deliver the letters to their mortified peers.

In December, a woman named Jessica Herrington received a letter from Brunswick Central Schools.  Her 9-year-old daughter had just gotten off the bus when she opened her folder and gave her mother what has become known as a "fat letter."

"She started crying," Herrington recalled.  "She did not want to go back to school."

The letter (seen below), is a typical format for those designed to warn of the "obesity epidemic" we are told is plaguing our schools. 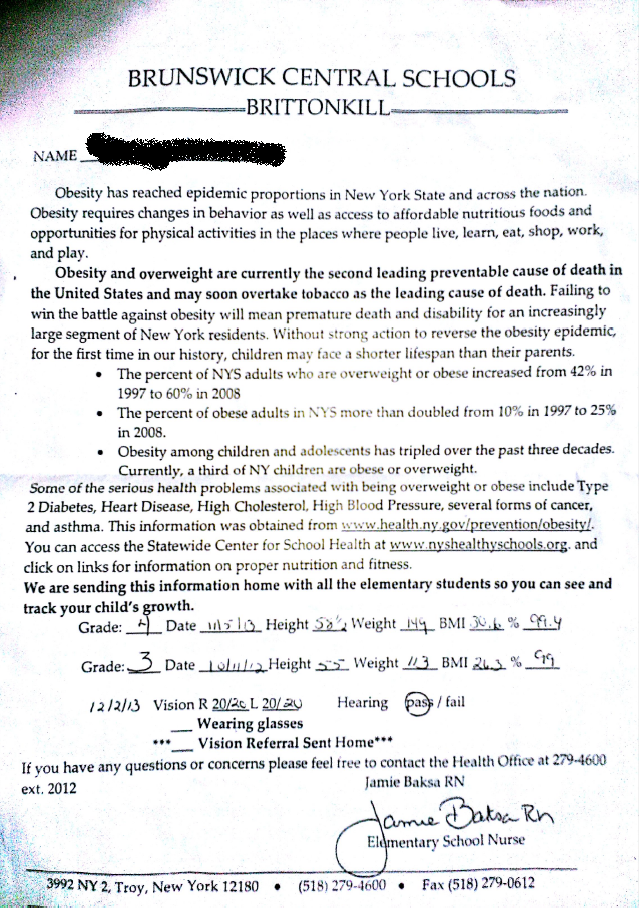 Aside from the completely inappropriate nature of the letter's delivery, it raises the question:  Does government have any business using the public school system as an agency to enforce the First Lady's "Let's Move" project?  Since when was the educational system granted the authority by "We the People" to police our children's lunch boxes?

The President's signature policy achievement - Obamacare - creates a slippery slope for these types of policies.  Senior Fellow and health policy expert at Heritage, Robert Moffitt, explains that even private insurance providers will have all key health insurance decisions made by government officials.  They will control preventative medicine and lifestyle habit decisions based on what they believe is best for you.

Like almost every other government-derived project, these "fat shaming" letters often have unintended, and harmful, consequences.

Last October, public schools in Massachusetts decided they would no longer issue the controversial letters, citing the potential to lead to eating disorders in students.  So why are school administrators in New York still trying to fat-shame and bully children into eating what they determine to be healthier options?

The real agenda seems to be steering parents and children to government websites like those mentioned in the above letter, where readers can "educate" themselves on better nutrition choices.  Better choices as determined by the government.  Let's move!

Forcing choices on people by shaming them for who they are is just another example of government bullying.

Herrington says, "The government needs to stay out of our lives."

The schools don't need any more bullies in the yard.

FreedomWorks has been promoting National School Choice Week this week, aiding parents by highlighting the need for effective education options for all children.  Exploring these options could help children and their families to escape this kind of bullying in their current schools. Kids should be free to attend schools where they can learn and feel good about themselves during the day, not develop eating disorders and grow depressed about who they are because of these fat-shaming government tactics.

This month the US Senate Committee on Health, Education, Labor, and Pensions held a hearing on the Higher Education Act, which was originally passed in 1965. The primary topic for the duration of the two hour hearing was the collection and dissemination of data from colleges and universities.

Originally posted March 28, 2013 - As a 15 year old, I never imagined my activism in politics would translate into controversy for me at school.

School Choice in America Part I

Today Americans find themselves in the midst of a great crisis in our educational system. Parents across the nation are waking up with the realization that the promise of public education has failed to deliver.

Charter Schools Take Off in Michigan

As Michigan kids head back to school, things are looking a little different. The cap on charters has been lifted, so there are thirty-one new school choices for families in the state this year.