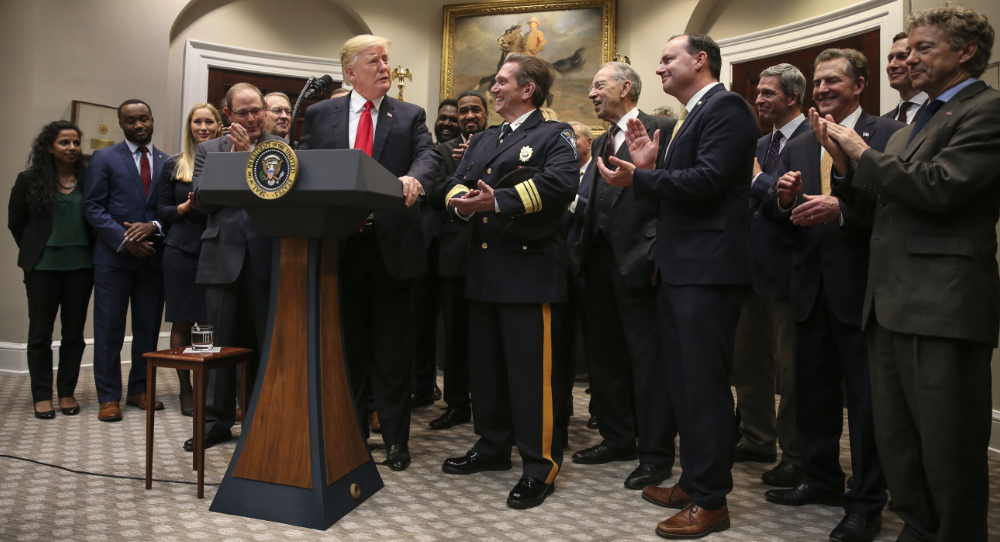 But, as is often the case in the legislative process, there will be an amendment process for the First Step Act. Unfortunately, a trio of unfriendly amendments have been offered by Sen. Tom Cotton (R-Ark.) and Sen. John Kennedy (R-La.). These amendments introduced by Sen. Cotton and Sen. Kennedy are poison pills, drafted and introduced with the purpose of defeating a landmark bill supported by President Donald Trump, not with the purpose of making the legislation better as amendments are meant to do.

Sen. Kennedy, however, claims he needs more time to read the First Step Act. This puts him in a weird position of opposing a bill that he says he hasn’t read. Of course, the original Senate version of the First Step Act, which was limited to prison reform, was introduced by May 2018. The sentencing reforms that have been added to the new version of the bill were based on the Sentencing Reform and Corrections Act, which was introduced in October 2017 and marked up by the Senate Judiciary Committee in February 2018. Sen. Kennedy sits on that committee.

Aside from the fact that the Cotton-Kennedy amendments have been introduced to hurt the First Step Act’s prospects of passage, there are a number of problems with the amendments that we’ve identified. For these reasons, we encourage the Senate to reject the amendments when they are brought to the floor for a vote.

This amendment seems to be more of the same type of objections raised by Sen. Cotton in the past regarding the exclusions list on the prison reform side of the bill. The exclusions list is already superfluous because of the risk and needs assessment, which in its operation ensures that those who have committed such heinous crimes as Sen. Cotton has identified, will not become low- or minimum-risk of recidivism in order to earn time credits.

Additionally, though, this amendment is much worse than just unnecessary in its efforts to add crimes such as carjacking to the exclusions list. It also includes a broad-brush exclusion for any crimes not listed in the subsection for which the offender is sentenced to more than one year that “ha[ve] as an element the use, attempted use, or threatened use of physical force against the person or property of another” or “that, based on the facts of the offense, involved a substantial risk that physical force against the person or property of another may have been used in the course of committing the offense.”

This wording effectively guts the purpose and functionality of the entire prison reform section of the bill. Virtually any offender could be classified under that language and thus would be fully excluded from earning time credits in any situation. The amendment pretends to be more of the same listing of egregious crimes that may arguably warrant exclusion, but in fact sneaks in unacceptable language meant to undermine the entire earned time credit system.

Amendment 2: Notifying victims before a offender is allowed to transfer out of prison early

This amendment masquerades as a harmless addition to promote victims’ rights, which is certainly a sympathetic cause. However, the amendment is not only redundant to current law and policy but its approach is also counterproductive and harmful for victims.

Much of what the amendment would do is already covered in 18 U.S.C. 3771, which is the Crime Victims’ Rights Act. This law was passed in 2004 as part of the United States Justice for All Act. It provides victims and witness with “[t]he right to reasonable, accurate, and timely notice of any public court proceeding, or any parole proceeding, involving the crime or of any release or escape of the accused.” The victim does, however, need to opt in to be notified.

There are other notifications that may be provided under this statute, such as a plea bargain or deferred prosecution. The statute also prohibits notification in the event that “such notice may endanger the safety of any person.”

Mandating notification as this amendment does is counterproductive in many ways to victims’ rights. Victims should be able choose whether or not to receive notification, as they already are under the Crime Victim Rights’ Act and operating policy. Unsolicited and unwanted notification could result in the serious unintended consequence of triggering trauma for a victim who does not wish to be reminded of his or her past experiences.

Additionally, the amendment would allow victims, upon this unsolicited notification, to submit a statement regarding the notification that the warden may use along with other factors to unilaterally deny a prisoner transfer into pre-release custody as a result of the time credits. This is a roundabout way to greatly discourage inmates’ successful participation in recidivism reduction programming, as her or his awareness of the ease with which one individual may deny his or her release is a significant deterrent and undermines the evidence-based objectives of the prison reform side of the legislation.

Of course, this outcome is also worse for victims, as reducing the likelihood of recidivism of offenders is inherently what is best for victims. This amendment discourages that, yet deceitfully pretends to advocate for victims’ rights.

Amendment 3: Tracking the effectiveness of the anti-recidivism programs

This amendment creates redundancy. The U.S. Sentencing Commission already provides detailed information on the recidivism rates of federal offenders. Although the measure of recidivism varies by report, the rates of rearrest, reconviction, and reincarceration are accounted for in many reports.

Although the rate of recidivism defined by rearrest is a common data point in U.S. Sentencing Commission reports, this is a poor measure. It is likely, though, that this measure is the one included in the amendment by its authors on purpose and for that very reason.

Additionally, the First Step Act as it stands already includes multiple mechanisms to ensure the effectiveness of the anti-recidivism programming and other aspects of the legislation as well. The First Step Act includes its own reporting requirements, establishes an Independent Review Committee to report on the system, and requires a Government Accountability Office report of the risk and needs assessment and the programming together.