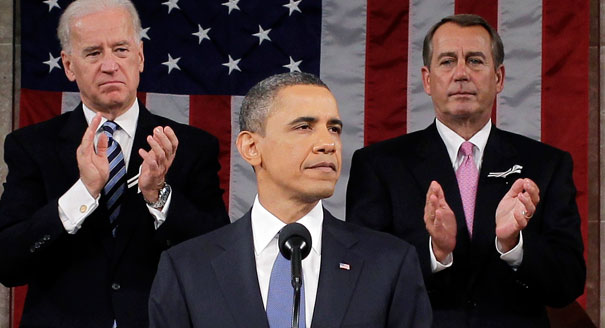 "Our unemployment rate is now lower than it was before the financial crisis."

Not quite. Officially, the Great Recession began in December 2007, when the unemployment rate was at 5 percent, according to data from the Bureau of Labor Statistics. The unemployment rate is currently 5.6 percent, its lowest point since June 2008. This may be splitting hairs, but words mean something. To his credit, though, it only took, what, five years after the official end of the financial crisis for unemployment to drop below 6 percent. Sigh.

"And over the past five years, our businesses have created more than 11 million new jobs."

This was a cleverly worded line, but it doesn't offer the full picture. FactCheck.org notes that this is true -- only if you don't include job losses at the beginning of President Obama's first term in office. Total net private-sector job gains since February 2009 is just under 8 million, or an average of roughly 108,000 per month. Economists say that the economy needs to produce 120,000 to 150,000 jobs per month just to keep up with population growth.

"In two weeks, I will send this Congress a budget filled with ideas that are practical, not partisan. And in the months ahead, I'll criss-cross the country making a case for those ideas."

That's not what pundits were saying about President Obama's policies and tone headed into the State of the Union address. They called him "combative" and "defiant." CNN noted that "he's still working to make Republicans play defense on issues where they've yet to prove themselves" and that policies laid out in the speech "could offer an early preview of 2016 election themes."

The delivery of the speech wasn't as strong as the led up to it suggested, but most of the tax hikes and spending increases proposed are the same stale ideas, repackaged and redelivered to lawmakers and the American people. That's not practicality, it's partisanship. Practicality would be putting forward ideas that could, you know, actually pass a Republican-controlled Congress.

"Today, we have new tools to stop taxpayer-funded bailouts..."

In reality, the "too big to fail" culture is still ingrained in Washington. Dodd-Frank perpetuates it in many ways, as does ObamaCare, which, provided Congress doesn't act with a permanent fix, could put taxpayers on the hook for health insurance companies' losses. And, as Michael Barone wrote earlier this week, the Department of Housing and Urban Development has formed new policies that may very well lead to a new housing bubble and, possibly, a replay of the Great Recession.

"And to everyone in this Congress who still refuses to raise the minimum wage, I say this: If you truly believe you could work full-time and support a family on less than $15,000 a year, go try it. If not, vote to give millions of the hardest-working people in America a raise."

The most recent minimum wage hikes, according a study released in November, had a negative impact on employment, hurting low-skilled and younger workers the most. What's more, the Congressional Budget Office says that hiking the minimum wage to $10.10 per hour, as President Obama has proposed, would cost between 500,000 and 1 million jobs. Moreover, most people who start out making the minimum wage don't stay there very long and they tend not to be the primary income earners in their household.

"By the end of this decade, two in three job openings will require some higher education. Two in three. And yet, we still live in a country where too many bright, striving Americans are priced out of the education they need. It's not fair to them, and it's not smart for our future. That's why I am sending this Congress a bold new plan to lower the cost of community college – to zero."

As Milton Friedman once said, "There's no such thing as a free lunch." The White House has pegged the President Obama's "free" community college initiative at $60 billion. Chances are, it's much more costly than that. And there's doubt that the plan, despite its high cost, would lead to many more people receiving their certificates or two-year degrees.

"As Americans, we cherish our civil liberties – and we need to uphold that commitment if we want maximum cooperation from other countries and industry in our fight against terrorist networks. So while some have moved on from the debates over our surveillance programs, I haven't. As promised, our intelligence agencies have worked hard, with the recommendations of privacy advocates, to increase transparency and build more safeguards against potential abuse. And next month, we'll issue a report on how we're keeping our promise to keep our country safe while strengthening privacy."

A year ago this month, President Obama promised to scale back the NSA's domestic spying program and laid out his ideas for reform. Though an independent governmental panel has declared the bulk phone data collection program to be "illegal" and his own White House Review Group on Intelligence and Communications Technology pegged it as "likely unconstitutional," President Obama has renewed the program on multiple occasions, the most recent of which came in December.

Curiously, President Obama didn't call on Congress to pass any reforms. He simply acknowledged that the debate still exists. It's true, though, that some lawmakers have been resistant to reining in the NSA, gutting originally meaningful legislation that would have protected Americans' civil liberties. Obviously, it remains to be seen if President Obama will live up to his rhetoric and sign a bill into law that restores the Fourth Amendment, but Congress has to act on something meaningful for Americans to find out.