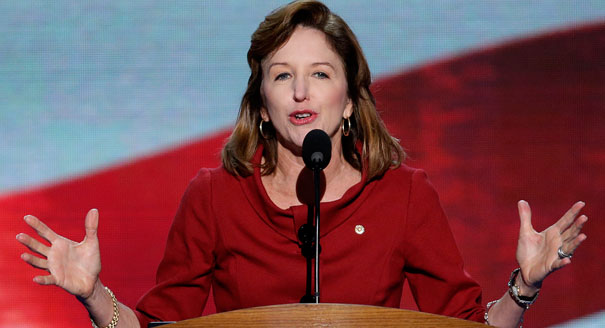 The North Carolina Department of Environment and Natural Resources (DENR) has released a scathing review of a $250,644 stimulus "green energy" grant to a business co-owned by Sen. Kay Hagan's (D-NC) husband and his brothers, which, in turn, contracted others businesses co-owned or connected to Hagan family members. The review, as the Carolina Journal reports, states that the "self-dealing" needs "further legal review":

Findings of a DENR staff review (PDF download) of the grant note that JDC Manufacturing, a real-estate management company owned by Sen. Hagan’s husband, Greensboro attorney Chip Hagan, and his brothers John and David, contracted with another Hagan-owned company, Plastic Revolutions, to handle one phase of a project upgrading light fixtures and furnaces and installing solar panels at the JDC building — which leases space to Plastic Revolutions.

The documents also state that “further legal review is warranted.”

Moreover, the review notes significant activity by Kay and Chip’s son Tilden, who along with Chip co-founded SolarDyne/Green State Power, a solar company that documents show had a role in the project.

If so, these arrangements would appear to violate provisions in both state and federal law prohibiting self-dealing and conflicts of interest in the handling of the stimulus grants. DENR Secretary John Skvarla and Commerce Secretary Sharon Decker have asked State Auditor Beth Wood to investigate this and other stimulus-funded projects handled by the State Energy Office and the Weather Assistance Program, which were housed in the Commerce Department before moving to DENR in 2013.

Kay Hagan, in one of her first actions in office, voted for the $830 billion stimulus bill in 2009 from which her family benefitted. Though she insisted that her vote for the wasteful, special interest-influenced bill "delivers on our simple promise to change the way things work in Washington," Hagan's family appears to have engaged in exactly the sort of , crony, parasitic behavior that disgusts Americans.