A Successful Business; is it still legal?

Is it now crimin 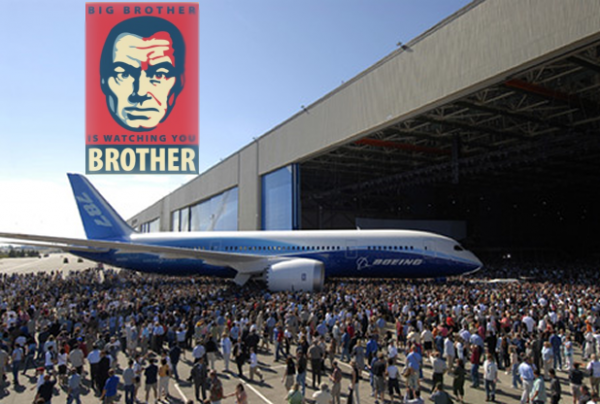 al to operate a successful business?In the looter-world of Ayn Rand’s Atlas Shrugged, it is. The modern United States has yet to declare making a profit and creating jobs illegal. America is still a free market and capitalist economy, where a business can open where it is best able to fulfill the demand for its product. The National Labor Regulations Board, however, does not appear to agree. The federal agency has sued airplane manufacturer Boeing for opening a new plant in South Carolina. In doing so, the union has overstepped its bounds by claiming it is illegal to open a new plant in South Carolina even though the new plant would benefit both the company and workers.

Boeing has opened a new factory in South Carolina to remain competitive with other businesses. The aerospace giant opened the $1 billion  factory in South Carolina to aid in the production of its new 787 Dreamliner passenger jet, which already has an impressive backlog of orders.  According to the NLRB, Boeing opened the new factory not simply to keep up with production deadlines, but to punish Washington Union workers for past strikes.  Yet the accusations are groundless. “Customers don’t want production delays caused by strikes”, explains William Kilberg, outside counsel for Boeing.  A company needs customers to function, and late delivery will eventually drive customers away.

If the suit is upheld, the NLRB would be harming the very workers it is claiming to help. If the NLRB is successful, wherein Boeing must shut down its new plant and manufacture the Dreamliner solely in Washington, production will slow notably. Workers in the Washington plant will have to slog through the large number of backlogged orders without another plant’s help, and if the union continues its pattern of frequent strikes, the planes cannot be manufactured on time. Late deliveries will cost Boeing the trust of its customers, resulting in fewer orders. Fewer orders mean fewer jobs for workers – union or otherwise. A cut in manufacturing jobs leads to a cut in the support industry that has grown up around the workers in the Boeing plant. The NLRB’s frivolous suit will have grimly concrete results; it will slowly kill the local economy that is dependent on Boeing manufacturing workers.

Far from being illegal to run an efficient business, it is actually helpful to the workers. The Boeing plant in South Carolina has sparked 1,000 new manufacturing jobs and brought $2 million to its economy. South Carolina took one of the hardest beatings under Obama’s economy, and the new plant is helping bring South Carolina back to life. Washington union workers have been helped as well. “Not a single union member has been adversely affected” by the decision to open a new plant, and in fact, Boeing has hired 2,000 new union workers in the Puget Sound area.

To punish a business because it acts with basic business acumen is worse than ridiculous, it is corrupt. The suit, Sen. DeMint argues, is “nothing more than a political favor for the unions who are supporting President Obama’s reelection campaign”.  It is sickening to use “the federal government as a political weapon to protect union bosses at the expense of American jobs” and workers.  Such acts are unacceptable at any time, but particularly now as unemployment hovers around 9% and the United States is teetering on the edge of another recession.

The NLRB’s suit can only hurt American workers. The union is short sighted, as a competitive Boeing helps everyone; an efficient company gains customers and orders, resulting in more jobs. More jobs require more workers and plants, both in Washington and South Carolina. Why does an organization, which purports to aid workers, want to dictate how a business can run itself? It will only succeed in wrecking the lives of Boeing workers. But of course, in a world where a successful business is illegal, the NRLB would be right at home.

In August 2015, the National Labor Relations Board (NLRB), in a departure from decades of precedent, unilaterally redefined what it means to be an employer. In the administrative decision, Browning-Ferris v NLRB, the unelected NLRB decreed that some employers were responsible for the employees of others. This action threatens to destroy the franchise model of business, harming job creation and putting 40,000 small businesses at risk. The difficulties for small business created by this decision are highlighted today in a Senate Small Business Committee hearing.

The NLRB's Labor Ruling Is Another Blow against Job Growth

The National Labor Relations Board has issued a decision that could have severe implications for many types of businesses across the United States. Essentially the ruling states that companies are responsible for labor practices between contractors and subcontractors. The higher-level companies will be considered “joint employers” with their independent contractors.

Guess Which Company Gains the Most From The Export-Import Bank

Reauthorization of the U.S. Export-Import Bank is one of the few agenda items that Congress is expected to address when legislators return from their summer break. The Export-Import Bank, which provides financing for foreign buyers of products from U.S. based companies, needs Congressional approval by September 30 to continue its operation.