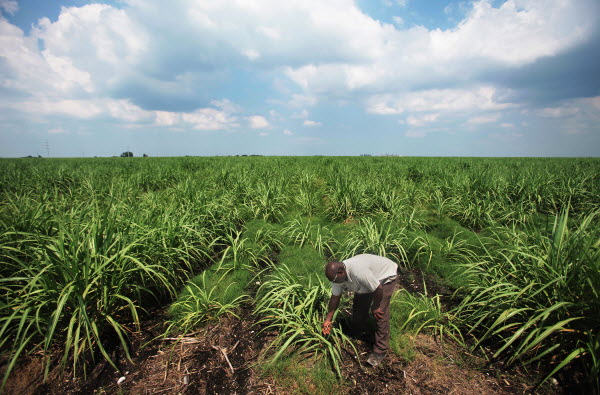 Sen. Marco Rubio (R-Fla.) made an unusual case for sugar subsidies at a recent event. He argued that ending price supports for the United States' sugar industry, thereby ending a market distorting policy, will put our national security in jeopardy due to the availability of cheaper sugar from other countries that grow the crop.

"[O]ther countries will capture the market share, our agricultural capacity will be developed into real estate, you know, housing and so forth," said Rubio, per the National Review, "and then we lose the capacity to produce our own food, at which point we’re at the mercy of a foreign country for food security."

Of course, Rubio's concern may have to do with the fact that Florida is one of the top producers of sugar in the United States, and he has received generous support from industry heavyweights. "Florida produces 2 million tons of sugar cane annually, constituting half of the nation’s domestic supply of sugar cane," the Florida Center for Investigative Reporting notes. "The industry is situated in the Everglades Agricultural Area, a 700,000-acre swath of fertile land south of Lake Okeechobee including parts of Glades, Hendry, Martin and Palm Beach counties."

Sugar subsidies may help this favored industry, but they are not good for businesses and consumers. In October 2013, the Wall Street Journal noted that the United States' sugar policy, which artificially props up the industry, has caused some candy makers to move at least some of their operations overseas, where they can gain access to cheaper sugar and reduce the cost of overhead.

One of the most recent examples of this trend is Oreo. The cookie maker's parent company, Mondelēz International, announced in July that it would move the production of Oreos from Chicago, Illinois to a new production facility in Salinas, Mexico. By the company's admission, the move will affect about 600 jobs.

While it has sparked outrage from some, including those who are boycotting Oreo, others, such as Bryan Riley of the Heritage Foundation, see the move as a product of bad policy. "Sugar-using industries now have a big incentive to relocate from the United States to countries where access to their primary ingredient is not restricted," Riley explained after Mondelēz International's annoucement. "If the government wants people making Oreo cookies and similar products to keep their jobs, a logical starting point would be to eliminate the U.S. sugar program, including barriers to imported sugar."

The United States' current approach to sugar policy is also bad for consumers. The Coalition for Sugar Reform notes that, in 2012, American sugar prices were 64 percent higher than the average of the world market and the price supports for sugar have cost business and consumers $3.5 billion annually since 2008. Mark J. Perry of the American Enterprise Institute came up with a similar figure. "Like all protection," Perry wrote, "sugar tariffs exist to protect an inefficient domestic industry (sugar beet farmers) from more efficient foreign producers (cane sugar farmers), and come at the expense of the US consumers and the American companies using sugar as an input, and make our country worse off, on net."

Rubio's reasoning for the status quo does not make much sense, as Windsor Mann of the National Review noted. "If protecting Americans’ lives were the goal, Rubio would be calling for a ban on sugar, not a subsidy. After all, sugar kills more Americans than terrorists do. According to a recent study published in the journal Circulation, sugar-sweetened beverages account for one in every 100 obesity-related deaths. Each year an estimated 25,000 Americans die as a result of consuming them," Mann quipped. "Obesity causes deaths. Sugar causes obesity. The government subsidizes sugar. You subsidize the government. You subsidize death. The terrorists win."

The sugar program, which was created in 1934 as a temporary measure to assist the industry, outlived its usefulness a long time ago. It is distorting the market, driving up the cost of food, and hurting businesses more than it helps the sugar industry. Congress should bring it to an end.

Sweet Talk: Time for Congress to Have a Conversation on Sugar Policy

Whether it be through taxes, regulations, or other big government policies, the federal government is quite adept at finding ways to sap money out of your wallet and into government coffers and the pockets of big special interests. One would think that the least likely suspect to drain your bank account would be sugar. It sweetens our coffee and other sweet treats we enjoy on a daily basis. However, U.S. sugar policy has been causing incredible economic harm to American consumers for years.

Key Vote NO on the Energy Policy Modernization Act, S. 2012

As one of our over 5.7 million FreedomWorks activists nationwide, I urge you to contact your senators and ask them to vote NO on the Energy Policy Modernization Act. S. 2012. This bill contains a grab bag of small provisions that add up to a major expansion of the federal government’s incessant meddling in the energy sector.

Just one week after the President said ObamaCare is working better than he expected, the Kaiser Foundation published a study that shows a whopping 95 percent of people who received advanced subsidies last year may have been handed an amount for which they were not eligible. To put that in perspective, to every 100 individuals that ObamaCare sent advanced subsidies, only five received the correct amount.