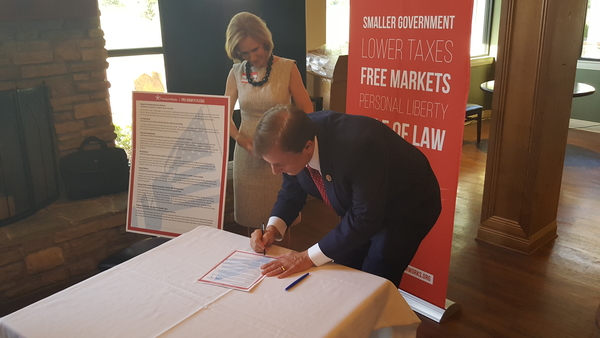 Congress may be away from Washington, but FreedomWorks isn't resting. Our hardworking team has used the legislative recess to their advantage, hosting several grassroots events around the country, including another stop on the Constitution Revival Tour in Sacramento, playing a major role in the RedState Gathering in Denver, and hosting our third super activist boot camp of the year in Chicago.

Part of this summer of freedom is gathering more signers to the Pro-Growth Pledge. Developed with Stephen Moore, FreedomWorks’ senior economic contributor, the Pro-Growth Pledge is a promise to constituents that the signing member of Congress will work to support economic growth through fundamental tax reform, reductions in spending, regulatory reform, sound money, energy freedom, and patient-centered health care.

The economic policies of the past seven and a half years have failed to produce significant economic growth. President Barack Obama will likely leave office as the first president since Herbert Hoover not to see a single year of economic growth above 3 percent. Economic growth has stagnated because the federal government taxes too much, promulgates rules and regulations that cripple certain sectors of our economy and hurts consumers, and drives up budget deficits and debt that not only crowd out private investment but rob future generations of prosperity and opportunity.

We caught up with Rep. Fleming, who has a 92 percent lifetime score with FreedomWorks, in Shreveport, the third-largest city in Louisiana and the largest in his district, Tuesday, July 26. Surrounded by a dozen or more of our activists, he signed the Pro-Growth Pledge.

Rep. Loudermilk signed the pledge at his district office in Woodstock, which is located 30 miles from Atlanta, on Thursday, August 11. Loudermilk, who has a 94 percent lifetime score on FreedomWorks’ Congressional Scorecard, met with 20 of our activists, most of whom live in his district, talked with them about issues facing their communities and the nation, and signed the pledge.

With approximately 40 of our activists on hand Monday, August 16, Rep. Weber, who has a lifetime score of 87 percent with FreedomWorks, signed the Pro-Growth Pledge in during a grassroots event in Beaumont.

Three more members will join the eight who have already signed the Pro-Growth Pledge in the coming days. Will your representative be among them?