Time to confirm Brett Kavanaugh and free the nation of regulations 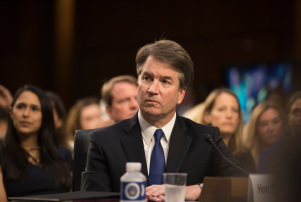 The Senate this week began hearings for the confirmation of Judge Brett Kavanaugh. He is the right choice for the Supreme Court because he will bring an end to the nearly endless list of federal regulations, many of which were unilaterally imposed by the Obama administration. If stacked one on top of another, all the pages of regulations handed down by the federal bureaucracy would slightly dwarf the Leaning Tower of Pisa in Italy. Much like that tower, these stifling regulations from the Obama era have caused uncertainty and instability here at home.

While the Trump administration has made great headway in repealing unnecessary regulations, there is still much to be done. As a Supreme Court justice, Kavanaugh would surely defend the original meaning of the Constitution by limiting the ability of unelected federal regulators to meddle in the affairs of private enterprise. Having a justice like this on the Supreme Court for a lifetime appointment could mean his nomination is the silver bullet in the heart of an overreaching government.

His past writings inspire nothing but confidence in his ability to be this solution. In the Harvard Law Review, Kavanaugh eviscerated the judicial precedent handed down in Chevron v. Natural Resources Defense Council, which states that federal judges must defer to the judgment of federal agencies when it comes to reviewing their actions. Kavanaugh called this practice, commonly known as Chevron deference, an “atextual invention by courts” and “nothing more than a judicially orchestrated shift of power from Congress to the executive branch.”

The fact that Kavanaugh will be replacing Justice Anthony Kennedy is gives hope to conservatives and small government advocates for the future. Kennedy was part of an insidious decision in Massachusetts v. Environmental Protection Agency which ruled that the government must regulate carbon dioxide and greenhouse gases. This started us down a road that ended in gross bureaucratic abuse by that agency.

On the other hand, the judicial record of Kavanaugh suggests he will avoid such self-inflicted wounds that Republican appointed justices have dealt to conservatives. In White Stallion Energy Center v. Environmental Protection Agency, Kavanaugh himself wrote a dissent asserting that the EPA must consider costs when issuing regulations. His assertion was later affirmed by Supreme Court, with the majority decision authored by the late Justice Antonin Scalia, who quoted Kavanaugh in his opinion.

In addition to overturning backroom Environmental Protection Agency rules, Kavanaugh has demonstrated his willingness to fight back against the Title II regulation of Federal Communications Commission during the Obama administration in 2011. In Telecom Association v. Federal Communications Commission, Kavanaugh argued that the agency’s regulations, commonly known as net neutrality, went far beyond the scope of their authority, and infringed upon our First Amendment rights.

Perhaps even further establishing himself as a champion of limited government and an opponent of the regulatory state, Kavanaugh wrote that if Congress has not opined on an issue of significance, all regulations related to said issue are presumed invalid. The Framers never intended for legislative powers to fall onto unelected executive branch officials. They, in Article I of the Constitution, specifically delegated such power to Congress. Kavanaugh sees this important point clearly.

Beyond fighting abuses by both the legislative and executive branches, Kavanaugh is also willing to turn the scope on himself and is a firm believer in judicial restraint. Kavanaugh does not let his personal political views cloud his judgment. He sticks to the scope of the case put before him. He sticks only to those facts rather than the political ramifications of any decision, and echoes the sentiment of Justice Neil Gorsuch that his personal preferences should be irrelevant when deciding a case.

Kavanaugh is an incredibly qualified jurist. He has served with dignity for 15 years on the District of Columbia Circuit Court of Appeals, which is often referred to as the second highest court in the land. The antics in the Hart Senate Office Building during the hearings this week showed us that Democrats in their opposition to Kavanaugh have no substance. They are simply doing whatever they think will delay his confirmation and are on the ropes because they know Kavanaugh will inevitably be confirmed. The only question is whether that will be sooner rather than later.

FreedomWorks Statement in Response to SCOTUS Ruling Regarding Forfeiture

WASHINGTON, D.C. -- In response to the constant disruptions by left-wing protestors, FreedomWorks’ grassroots activists travelled from across the country to show support for Senators voting in favor of Judge Kavanaugh’s confirmation to the United State Supreme Court.

WASHINGTON, D.C. -- In response to Majority Leader Mitch McConnell’s (R-Ky.) recent decision to break with tradition and keep the Senate in session throughout the month of October, Adam Brandon, FreedomWorks President, commented:

FreedomWorks Grassroots Activists Drive More than One Million Messages to Support the Confirmation of Brett Kavanaugh to the U.S. Supreme Court

WASHINGTON, D.C. -- FreedomWorks grassroots activists from across the country have driven nearly 1.1 million messages to Senate Republicans and Red State Democrats in recent weeks in support of Judge Brett Kavanaugh’s confirmation to the Supreme Court.