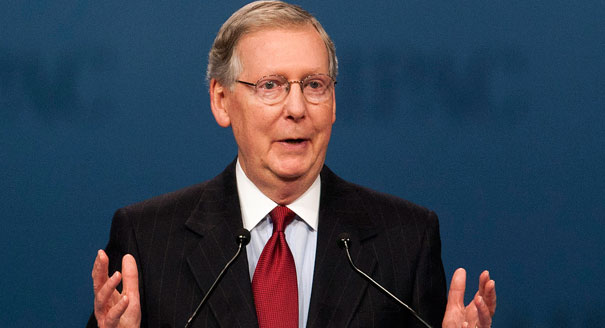 To the contrary, the Patriot Act is one of the most anti-civil liberties legislation in a generation. The Patriot Act violates the 4th Amendment to the Constitution by authorizing the federal government to spy on U.S. citizens without a warrant. The law contains a controversial provision, Section 215, that permits the federal government to collect call records made by every American, without needing any suspicion of wrongdoing.

2. Senator McConnell called the passage of TARP, “Senate at its finest.” Source: The Hill.

McConnell voted in favor of the Troubled Asset Relief Program (TARP). Also known as the $700 billion bank bailout, the largest ever government bailout of a private industry. FreedomWorks strongly opposed TARP during the George W. Bush administration. However, McConnell praised its passage. He added: "In the years that I’ve been here, I can’t recall a single time, where in this close proximity to an election, both sides have risen above the temptation to engage in partisan game playing if you will, to address an issue of great magnitude."

McConnell voted for Medicare Part D. The massive government health care program is the largest entitlement expansion since the Great Society with the exception of now ObamaCare. Medicare Part D has expanded the deficit and added trillions of dollars in unfunded liabilities for taxpayers.

5. “The biggest hero to emerge from the hearings before the 9/11 Commission has been the Patriot Act.” Source: U.S. Senate Committee on Environment and Public Works press release.

No. An abusive law that treats innocent American citizens like suspects is not heroic. (See: #1)

6. "The President has made it clear that the NSA is acting within the law and is doing what needs to be done to protect America from future attacks." Source: Project Vote Smart.

To be fair, this quote is from 2006. However, the Snowden leaks revealed that the National Security Agency (NSA) has been collecting telephone metadata on millions of Americans since at least 2006. Our civil liberties matter regardless if a Republican or a Democrat is in the White House. The NSA's actions are not necessary or constitutional.

7. On TARP: “Under ordinary circumstances, I would have opposed such a measure. Government intervention in the marketplace cuts against all my ordinary impulses. But this was not an ordinary event. I, and many others, believed that extraordinary action was needed to protect millions of ordinary Americans from the colossal and far-reaching mistakes of a few. And action was taken." Source: RepublicanSenate.Gov.

Hmm. Does this remind you of the famous George W. Bush quote from the TARP-era? "I've abandoned free-market principles to save the free-market system." The real solution is to allow the market to get us out of the mess that was actually created by government intervention in the market in the first place. There is no justification for taxpayers to be put on the hook for hundreds of billions of dollars to pay for the bad decision of big bankers.

No. TARP has not been a success. The bank bailout set a dangerous precedent and will likely lead to more bank bailouts in the future. If banks know that they will bailed out if they fail, they are more likely to engage in high-risk and high-reward positions. If they succeed? They are rewarded by the market. If they fail? They are rewarded by the government through taxpayers. It's a win-win scenario that only encourages bad behavior.

9. “If there is any criticism at all with the proposed FISA reauthorization, it is that it does not go far enough. Most Americans have the common sense to recognize that FISA and every other tool we have used in this fight are worth making permanent.” Source: National Review.

Senator Mitch McConnell voted for the FISA Amendments Act of 2008, which granted immunity to companies for giving private information about their customers to the government without a warrant. There are many privacy and transparency concerns with the Foreign Intelligence Surveillance Act (FISA) especially with the FISA courts. These top secret courts are where the NSA gets its legal authority to spy on Americans. According to CNN, "The Foreign Intelligence Surveillance Court -- or FISA Court for short -- is a panel that critics contend rubber-stamps nearly every National Security Agency request to snoop that it receives." FreedomWorks has supported efforts to make FISA court decisions open and accountable to the people.

10. “Nothing in this [Patriot Act] extension has ever been found to be unconstitutional.” Source: CSPAN2.

McConnell voted to make most of the USA-PATRIOT Act’s provisions permanent in 2006.

This is all that needs to be said:

"The right of the people to be secure in their persons, houses, papers, and effects, against unreasonable searches and seizures, shall not be violated, and no Warrants shall issue, but upon probable cause, supported by Oath or affirmation, and particularly describing the place to be searched, and the persons or things to be seized." -4th amendment, U.S. Constitution.

Another area where progressives and real conservatives have common ground. We all oppose the intrusion of the state into our private lives in the way the NSA has been responsible for. It is the establishment politicians who are our common opponent.