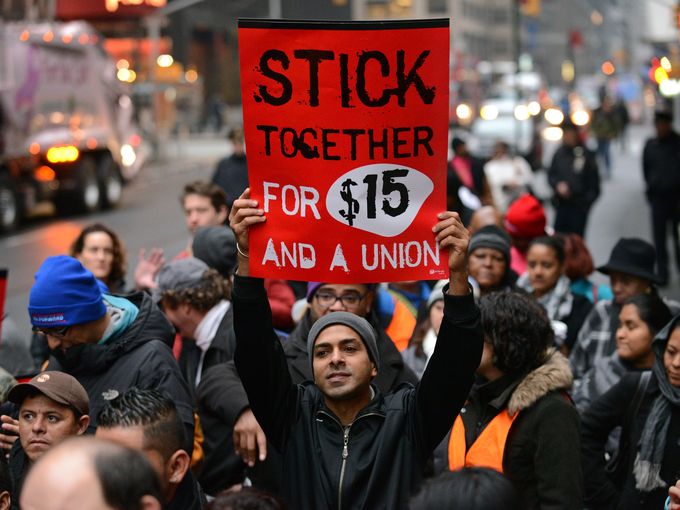 Since the first federal minimum wage went into effect in 1938, there have been people calling for an increase. Recently, there has been a push for a $15 hourly minimum wage at the federal level, as well as within various state and municipalities. Many of these calls for minimum wage hike have been led by, and funded by, unions. One in particular, Raise the Wage, called for a $15.25 minimum wage in Los Angeles and was funded by unions, including AFL-CIO.

“With a collective bargaining agreement, a business owner and the employees negotiate an agreement that works for them both. The agreement allows each party to prioritize what is important to them. This provision give the parties the option, the freedom, to negotiate that agreement. And that is a good thing.”

Of course, this freedom to negotiate an employment agreement would have the same benefits at the individual level as it does through collective bargaining. So while Mr. Hicks may only want a special carve out for his union, his argument really calls for an end to minimum wage requirements.

So why were unions in Los Angeles fighting for a minimum wage hike and then requesting an exemption for themselves when the city council approved a $15 minimum wage?

Their hope is that they can increase union membership, which has been dropping for decades, by enticing employers with cheaper labor. By getting themselves exempted from the minimum wage requirement, unions can offer employers a labor force at $12/hour or even less. For a large company, this difference in wages could save them millions over an entire year.

So the employer gets its labor force at a reduced rate, and unions get to collect their initiation fee and a percentage of each employee’s wage. Everybody wins! Except of course the actual worker, who now works for a lower wage than others in the city and gets money taken out of each paycheck.

This is not a new tactic being tried out in Los Angeles, it is a pattern. Unions have already been exempted from minimum wage requirements in San Francisco, Oakland, Richmond, Long Beach, San Jose, Milwaukee and Chicago, after calling for the minimum wage hike in the first place. They view this approach as a way to stay relevant during a time when private employees have increasingly been rejecting unionization.