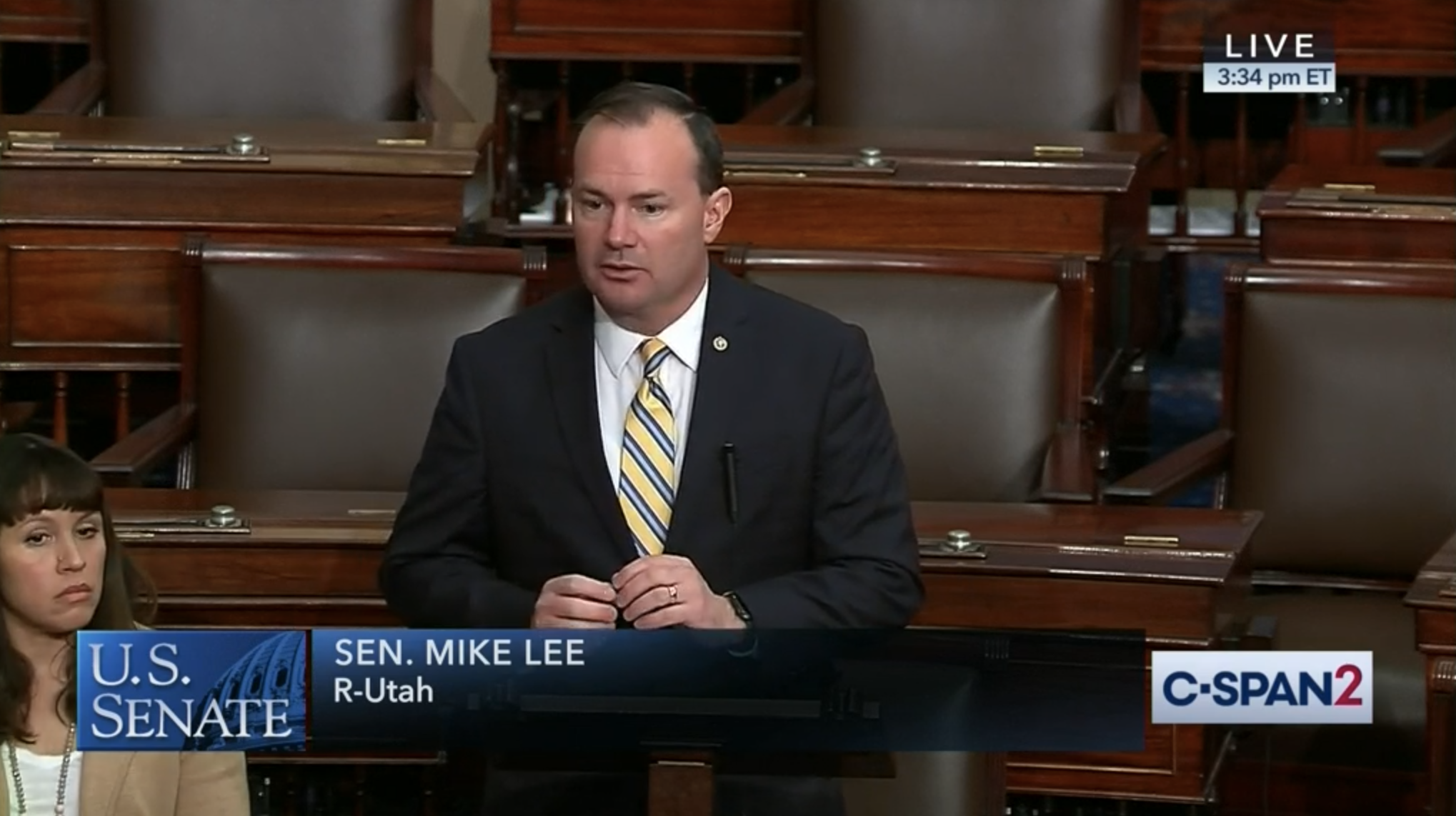 The USA PATRIOT Act was passed in the aftermath of the September 11 terrorist attacks. After the disclosures of mass surveillance were made in 2013 by Edward Snowden, there were very loud calls for reform from some Republicans and many Democrats in Congress. In 2015, Congress responded with the USA FREEDOM Act, which, as introduced, was a good reform bill. It was, however, watered down during the legislative process. The end product was a bill that FreedomWorks couldn’t support.

The USA FREEDOM Act Reauthorization Act, H.R. 6172, would reauthorize three surveillance authorities -- Section 215 of the USA PATRIOT Act as well as the “lone wolf” and “roving wiretaps” provisions. These authorities were supposed to expire on December 15, but the leadership of both parties jammed a 90-day reauthorization of them into the Continuing Resolution, the epitome of a “must-pass” bill, H.R. 3055, which extended them in through March 15.

Section 215 is the so-called “business records” provision of the USA PATRIOT Act. This provision allows the Federal Bureau of Investigation (FBI) and the National Security Agency (NSA) to warrantlessly collect information about phone calls, firearms sales, financial transactions, and medical information about individuals, including Americans. In 2018, for example, 14 orders under Section 215 were approved by the Foreign Intelligence Surveillance Court (FISC) against 11 targets yielded 19,372,544 phone identifiers and 434,238,543 phone records.

The vast majority of people affected by this wide surveillance dragnet are innocent Americans. This is because the federal government is currently allowed to collect the phone records of individuals who are “two hops” from a target. Because the NSA still ended up repeatedly acquiring volumes of information unlawfully under that authority, the NSA shuttered the “call detail records” (CDR) program more than a year ago.

On Thursday, Sen. Mike Lee (R-Utah) tried several times to use a Senate procedure, unanimous consent, to reauthorize the expiring provisions of FISA for 45 days while ensuring that the Senate would have the chance to vote on bipartisan, privacy-protecting amendments. President Donald Trump has expressed a measure of skepticism towards the bill, which Sen. Lee noted on the floor.

“[I]f the President of the United States himself has reason to be concerned about FISA, what about the rest of America? This is just the episode that people know about in connection with the abuse that took place in the Carter Page investigation. Had Donald Trump not become President of the United States, we might well still not know about this particular instance of abuse,” said Sen. Lee. “Because of the secret manner in which this law operates and the failure to provide special protections for known U.S. citizens, we all stand vulnerable--every American citizen, whether they hold office or not, whether they are famous or not, whether they are rich or poor, regardless of their culture, their background, or what part of the country they hail from.”

The reforms he and other senators want to seek through the amendment process, Sen. Lee explained, are not controversial, or at least shouldn’t be controversial.

“The rules we are proposing are not excessive. They are not extreme. They are actually very mild. Among other things, we would like to see more robust amicus provisions, meaning provisions allowing for a third-party advocate in the FISA Court to be called in, under certain circumstances, especially involving a sensitive investigation--involving, for example, a political campaign or a candidate, an officeholder, a church, a media establishment, something like that that operates with express constitutional protection,” Sen. Lee said. “An amicus ought to be appointed to represent an absent contrasting viewpoint, to represent American citizens where American citizens' rights might be in jeopardy.”

In his initial objection to Sen. Lee’s request, Sen. Burr made several statements that raised eyebrows. First, Sen. Burr said, “Senator Lee has never supported this bill, never supported giving any of these authorities to law enforcement.” Well, that’s not true. In fact, Sen. Lee introduced the Senate companion of the USA FREEDOM Act in April 2015 with Sen. Patrick Leahy (D-Vt.). Although the House version of the USA FREEDOM Act is the one that came before the Senate, Sen. Lee voted for it.

Sen. Burr claimed that Sen. Lee was holding the USA FREEDOM Act Reauthorization Act hostage. He said, “[W]e don't play national security risk, boogeyman games against the American people. We err on the side of providing as many tools as we possibly can to make sure that our oath to keep America safe is as robust as it possibly can be.”

Curiously, Sen. Burr claimed that he’s “ready for a big debate,” but he wouldn’t allow Sen. Lee’s request for a 45-day extension of the expiring provisions. Sen. Burr added that he would “let us go dark,” meaning let the three provisions expire, rather than permit the Senate to consider Sen. Lee’s amendments.

Perhaps the most concerning thing Sen. Burr said was that “[t]he President, under 12333 authority, can do all of this without Congress's permission, with no guardrails, with no ability to go in and say: Stay within this.”

There is good reason to be frightened by this assertion from Sen. Burr. In 2001, the Department of Justice secretly concluded that FISA "cannot restrict the president's ability to engage in warrantless searches that protect the national security." Based on that now-repudiated conclusion, the government started an unconstitutional, stunningly illegal mass surveillance program known as Stellar Wind, which operated secretly for about 5 years. After media learned of the program, thanks to senior DOJ attorneys who recognized its illegality, the government secretly revived a significant part of it under Section 215, in the form of the “bulk telephone metadata dragnet” that Snowden revealed.

In other words, Sen. Burr is claiming that if Congress doesn’t authorize this surveillance, any President could do it on his or her own -- without congressional limit. While this is directly contradicted by several court cases and numerous founding principles of the United States, it may nonetheless be operative. Attorney General Bill Barr, who supports the USA FREEDOM Reauthorization Act as is and, presumably, opposes any amendments, personally authorized yet another secret mass surveillance program operated by the Drug Enforcement Administration, without legal review -- nearly 30 years ago.

To say the least, it is extremely concerning to hear this incorrect and dangerous claim from one of the principal overseers of executive surveillance.

We do not see a debate over substance between two sides in this current fight. The amendments that Democratic leadership in the House, and now Republican leadership in the Senate, are aggressively attempting to stop Congress from considering are modest. Indeed, had leadership allowed votes on amendments yesterday, there is a fair chance that the USA FREEDOM Reauthorization Act, deeply problematic as it is, would already be law. Instead, Senate leadership has decided to allow these authorities to lapse, to buy enough time to silence Sen. Lee and his allies through cloture.

Instead, we see an attempt by the leadership of both parties to do everything in their power to stop members of Congress from voting on serious FISA reform. Which, to be clear, the USA FREEDOM Reauthorization Act is not.

Thanks to Sean Vitka of DemandProgress for leading his expertise for this blog post.

On behalf of FreedomWorks’ activist community, I urge you to contact your Senators and ask them to vote YES on civil liberties reform amendments (Lee-Leahy/Paul/Daines-Wyden) to the USA Freedom Reauthorization Act, H.R. 6172, and to vote NO on amendments that would substantially weaken these reforms (McConnell). The underlying bill, H.R. 6172, would reauthorize portions of the Foreign Intelligence Surveillance Act (FISA) that have been expired since March 15th of this year.