This Week Is The DNC's Turn To Reveal Their Campaign Themes

Last week, blogging from Tampa, I outlined the clear themes that emerged for the Romney campaign. This week, viewing from home, it has already become clear after the first day of the Democrat National Convention which themes they will promote to reelect Barack Obama. Suffice it to say that this will, indeed, be a clear choice in November.

The themes that emerged from the Republican National Convention were executive leadership, immigrants coming to America to find success, entrepreneurship, how free markets are better than entitlements and government dependence for minorities and women, and a leadership and problem solving style that is results oriented.

Of course, the Democrat National Convention has a different view of the value of government dependence:

Transcript:
We are committed to all people. We do believe you can use government in a good way. Government is the only thing we all belong to. We're [in] different churches, different clubs, but we're all together as a part of our city or our county or our state. And our nation.

(By the way, it's pretty flippin' creepy, right at the beginning, that they have a bunch of people riding bikes, looking like Obama in that one unfortunate pic from Martha's Vinyard, riding in unison in a circle ... but I digress.)

The negative reaction to this video has been coming fast and furious from all corners of the blogsophere, and with good reason. As of mid day Wednesday, the video has been seen almost 145,000 times, with under 200 likes and over 3000 dislikes. The comments on the youtube post are overwhelmingly negative. 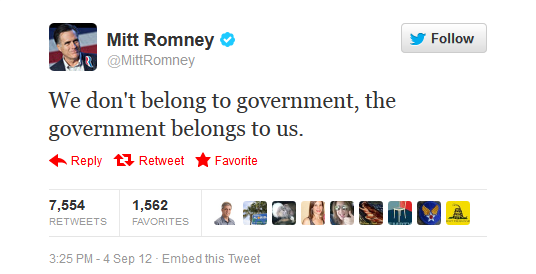 The DNC could not have made it more clear where they stand. Indeed, I've blogged previously about the nakedly marxist nature of Obama's utterances, and they now appear to be doubling down on the populist, collectivist, shared sacrifice, spread the wealth around, at some point you've made enough money message.

Of course, other fun themes emerged from the DNC's first day as well:

Blast from the past: Dukakis to attack Romney’s gubernatorial record at DNC

As if that weren't a sufficient reminders of the failures of the past, they also trotted out Jimmy Carter and Ted Kennedy:

Sometimes, they make it too easy for us. After the all star lineup from Tampa last week, one wonders how Conservatives ever lose elections in this country.

What do you think of the Democrats reinserting 'God' And 'Jerusalem' into party platform? Take the Poll: http://www.votable.com/poll/1070/What_do_you_think_of_the_Democrats_rein...

A complete and total scam. It's only because they got caught that they put them back in. I can only wait to see what other changes are still waiting to be found out.