Remember back in June when the Obama administration promised the American people a “Recovery Summer?” Vice President Joe Biden assured us that “some time in the next couple of months we’re going to be creating between 250,000 jobs a month and 500,000 jobs a month.” To the contrary, the economy has lost 283,000 net jobs this summer.  As we’ve come to expect, the Obama administration economic forecasts were dead wrong.

Unfortunately, the Obama administration refuses to admit that the “stimulus” has repeatedly proven to fail by its own measures. Recently, a reporter asked Obama whether or not he regretted calling it a “Recovery Summer.” Unsurprisingly, Obama failed to face economic reality by stating: “I don’t regret the notion that we are moving forward because of the steps that we’ve taken.” How exactly are we moving forward? Between June and August, the unemployment rate has increased .1 percent to 9.6 percent.

All signs point to the fact that the “stimulus” has made the economy worse than it otherwise would be. Last week, Austin Goolsbee took over as the Chair of the Council of Economic Advisers after Christina Romer left her position. Goolsbee who now has the impossible task of defending the flawed “stimulus”, claims that we simply misunderstood the term “Recovery Summer.” According to Goolsbee, the “Summer Recovery” was supposedly a reference to the “stimulus” but not job growth. He states:

The vice president was talking about the Summer of Recovery in reference to the recovery act — that you would see the creation of a series of infrastructure and other projects ramping up over the summer, and you did see that.

Wasn’t investing more money into these infrastructure projects suppose to lead to a “Recovery Summer?” Thus far, $275 billion of the massive $814 billion “stimulus” has been spent in grants, contracts and loans. The projects created are easy to visibly see due to propaganda “stimulus” road signs that cost taxpayers up to $10,000 each. However, in a chart by Mercatus Center Senior Research Fellow Vernonique de Rugy, increased “stimulus” spending has certainly not boosted job growth: 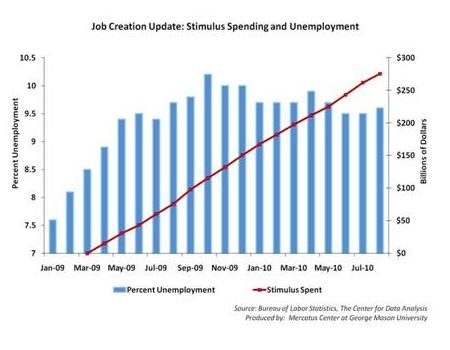 According to Vernonique de Rugy:

This evidence is more reason to believe that Obama’s proposed $50 billion “stimulus” plan to create infrastructure projects will not create net new jobs. Instead, it will destroy jobs by taking away money from the productive private sector to fund mostly wasteful pet projects. The key to truly stimulating the economy is to create jobs by allowing taxpayers to keep more of their hard earned money to save, donate or spend on goods and services that they personally desire. Until Congress stops these “stimulus” plans that actually increase unemployment, we may be facing the “autumn of wreckage.”