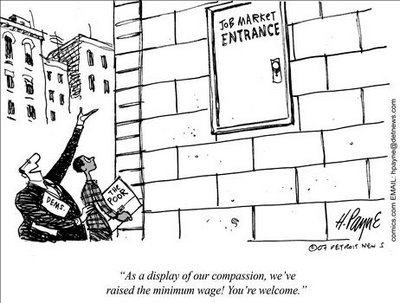 Earlier this year, the Congressional Budget Office released an analysis on effects of raising the minimum wage to $10.10 per hour, a proposal supported by President Barack Obama and many Democrats on Capitol Hill. The nonpartisan fiscal research arm of Congress estimated that this artificial increase would result in as many as 1 million workers losing their jobs, a finding that was disputed by the White House and economists more interested in advocacy for a cause than the consequences of bad policy.

In 2007, the Fair Minimum Wage Act was included as a rider on an emergency appropriations bill to continue funding for the Iraq War. President George W. Bush, who insisted on and got tax incentives to offset the impact of the hike, signed the measure into law. The Fair Minimum Wage act mandated that the federal minimum wage in three steps, from $5.15 to $5.85 per hour in July 2007 to $6.55 in July 2008 to $7.25 in July 2009, where it stands today.

Jeffrey Clemens, an economics professor at University of California-San Diego, and Michael Wither, a grad student at the school, found that the federal minimum wage hikes "had significant, negative effects on the employment and income growth of targeted workers" from December 2006 to December 2012, a period which covers the Great Recession and subsequent economic recovery. The study did not estimate the impact in states with minimum wage laws that were greater than the federal rate.

The study found that the minimum wage hike "increased the likelihood that targeted individuals work without pay," gaining experience through internships. The authors note that "[t]his novel effect is concentrated among individuals with at least some college education."

Like the CBO analysis of the proposed $10.10 minimum wage, the Clemens-Wither study serves as a warning for what'll happen if Congress artificially increases wages. It'll reduce employment, hurting low-skilled, already low-income workers -- the very people whom advocates say it's intended to help -- the most.