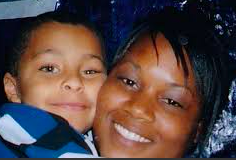 Tynice Hall was a 22-year-old mother whose boyfriend was using her home as a storehouse for dealing drugs, including crack cocaine. Hall, who came through a rough upbringing, admitted in a clemency petition after her incarceration that she had “reaped the financial benefits of the illegal drug trade” even though her actual involvement with her boyfriend’s operation was tangential. Arrested for possession with intent to sell crack cocaine, even though it was her first drug offense, the presence of weapons on her property as well meant that Hall received a 35-year sentence without the possibility of parole in 2006.

By all accounts, Tynice used her time trapped in the Federal justice system to become exactly the sort of rehabilitated offender who is primed to turn her life around and reenter society successfully. She took advantage of opportunities to earn a number of professional skills and certifications while working towards a college degree, and kept a completely clean prison conduct record over nearly 14 years served. Nevertheless, under federal sentencing guidelines, the earliest she was likely to be released was March of 2024. In fact, as the U.S. District Court for the Northern District of Texas noted during a 2007 appeals hearing, the 35-year sentence Hall received was the mandatory minimum for the charges upon which she was convicted.

Based on her model behavior it is extremely questionable whether Tynice even ought to have served as many years in confinement as she did, away from her now 16-year-old son and her aging parents who have raised him, all for a first-time non-violent drug offense where she was not even convicted of being an active participant. Fortunately, her case was not only noticed by the American Freedom Initiative but also by Kim Kardashian and, eventually, the White House. Tynice Hall’s sentence was commuted on February 18th of this year by President Trump, one of three AFI candidates to be released by executive order that day.

Hopefully, Tynice Hall can be among just the first of many similar stories of redemption to emerge from under the sometimes-cruel mandates of federal criminal law. We will continue to regularly highlight others whose unduly harsh sentences and demonstrated recognizance may merit a similarly expedited return to freedom.