The administration’s executive order states, “The ‘most-favored-nation price’ shall mean the lowest price, after adjusting for volume and differences in national gross domestic product, for a pharmaceutical product that the drug manufacturer sells in a member country of the Organization for Economic Cooperation and Development (OECD) that has a comparable per-capita gross domestic product (GDP).”

In short, the administration wants to make sure that it implements price controls so strict that the U.S. has the lowest prices anywhere within “comparable” OECD member nations. This would be a disaster. There are many underlying issues in our nation’s healthcare sphere. Price controls fix none of them, but only seeks to mask the issue.

Sadly, the “most-favored nation” (MFN) provision of this international price index (IPI) can’t accomplish even that. As our scorecard shows, these nations have a variety of issues of their own. Many suffer from long wait times for care, delayed access to new cures, some are even overtly socialist single-payer systems. America would be imitating broken systems in the hope of fixing our own. 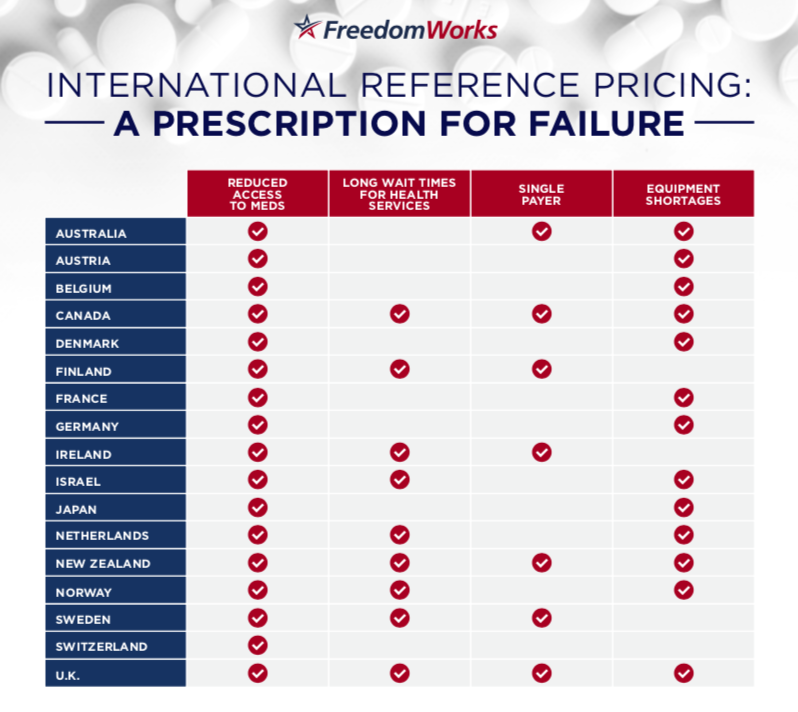 The 16 reference nations were chosen based on their GDP per capita. OECD Nations with a per capita GDP of at least 60 percent of the U.S. merited inclusion in the scorecard. Those nations were then evaluated on four different criteria on a simple “yes or no” basis.

Reduced Access to Meds: Determined by nations with access to fewer than 75% of the new cancer drugs made available.

Long Wait Times for Health Services: Countries where wait times were designated as an “issue” in multiple general health categories in OECD’s 2019 Health Policy Questionnaire. Alternatively, for countries who did not respond, countries that had a wait time longer than 35 days for elective surgery.

While not directly related to prescription drugs, this category is emblematic of further distortions and shortcomings beyond the first category.

Equipment Shortages: According to OECD data from 2018. Countries that have access to fewer than two-thirds MRI machines per capita than the United States.

This is to illustrate just how foolish it is to hold these nations up on a pedestal, given how their command and control systems cause problems across the healthcare sphere.

Single Payer: As defined by noted international reference pricing proponent, Avik Roy. There are a number of avowedly socialist, single-payer nations in the IPI/MFN executive order.