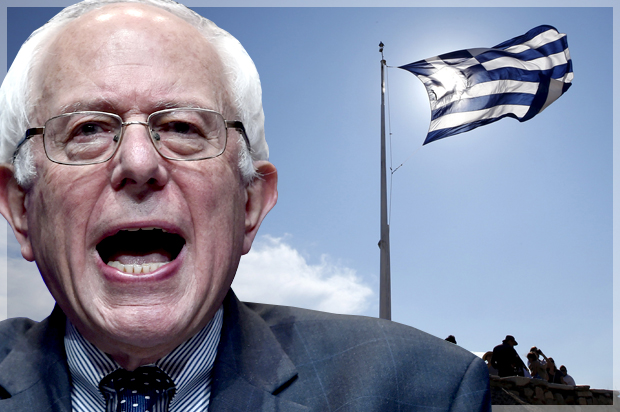 "Much of the social history of the Western world, over the past three decades, has been a history of replacing what worked with what sounded good." — Thomas Sowell

Devout socialist and communist sympathizer, Democratic presidential candidate Bernie Sanders, announced on Monday an economically and constitutionally irresponsible scheme to "combat climate change and cut carbon emissions by more than 80% by 2050." Sanders' plan would impose a tax on carbon and prohibit extraction on federal lands.

Sanders also stated he would expand the EPA by establishing a clean energy federal workforce program of "10 million jobs to convert the economy to a 100% clean energy system." According to Sanders’ plan, this strategy would "lead to a reduction in U.S. carbon pollution of 40% by 2030." During his announcement Sanders proclaimed:

“The debate is over. The vast majority of the scientific community has spoken. Climate change is real...We will act boldly to move our energy system away from fossil fuels, toward energy efficiency and sustainable energy sources like wind, solar, and geothermal because we have a moral responsibility to leave our kids a planet that is healthy and habitable.”

Let's break it down and discover why Bernie Sanders' plan would put the United States in a catastrophic position. First, Climate change is real, but man is not the reason, and if any politician uses it as an excuse to intervene in the economy or take away civil liberties to push their green agenda, it is because they are attempting to seize more control through the use of the state. There is enough scientific evidence to prove this, since after all, global cooling is now a laughable concept, and progressives have jumped off the global warming ship and onto the climate change train.

If that's not scary enough, Sanders' biggest target — the billionaire class — is in part to blame for a lot of the false climate change narrative, since crony capitalists have profited off eco-friendly technology and government kickbacks to keep the fear mongering alive. Breitbart columnist James Delingpole stated in his article discussing the climate change hoax:

"Then there are the people who benefit financially from this $1.5 trillion climate change industry: the carbon traders; the dodgy academics; the vulture capitalists pecking on the bloated carcass of renewable energy; the environmental NGOs; the environmental consultancies who specialise in giving “expert” testimony at planning appeals, arguing on the most spurious grounds that no the bats and birds in this area aren’t going to be affected by this new wind turbine they’re going to be happier than ever no really; the sustainability officers at every level of local government; the green advisers attached to every business who advise them how to reduce their CO2 count; the PR companies that specialize in green awareness; Dale Vince…."

Secondly, expanding the EPA and the creation of a new task force would not fix manmade climate change even if it was real. Is this plan actually intended to help out the environment, or is it fulfilling another socialists goal? Robert Romano, a contributor to the Conservative Review, noted in his article regarding the recent Paris Climate Treaty:

"The U.S. via the Environmental Protection Agency and other federal government agencies is one of the most heavily regulated economies in the world. Rules have been put forth with the singular intention of restricting coal-fired electricity plants, to reduce our output on the grid. In the process, electricity becomes more expensive. In the meantime, labor costs here are prohibitively high. Why build a factory in the U.S.? All because world trade rules and these silly climate agreements grant favors — special and differential treatment — to developing economies like India."

Finally, what is probably the most ridiculous part of his plan involves his tax on carbon and creation of millions of government jobs, to create a cleaner environment and put more people to work. A heavy handed carbon tax wouldn't simply pound down industrialists, but would hurt the American people greatly ranging from the upper class to those in poverty. Dr. E. Calvin Beisner spoke recently on the topic of a carbon tax and stated:

Reducing CO2 emissions would require less dependence on fossil fuels, which now provide over 85 percent of all the energy humans consume and are likely to continue to do so through probably the end of this century. But they are our best source for the abundant, affordable, reliable energy indispensable to any society's growing and staying out of poverty. Forcing the substitution of wind, solar and biofuels means raising the cost and reducing both the quantity and the reliability of energy available, which means slowing, stopping or reversing mankind's growth out of poverty.

What about all those jobs the potential Sanders administration would make? All we need to do is look back in our history to Roosevelt's New Deal in order to understand how these austerity measures would damage job creation and wealth growth even further. According to a study by the Cato Institute analyzing the economic effects of Roosevelt's policies, New Deal taxes "were major job destroyers during the 1930s, prolonging unemployment that averaged 17%. Higher business taxes meant that employers had less money for growth and jobs." What is even further evidence of this socialist scam is the unforeseen consequences of such actions; according to Cato scholar Jim Powell:

"What about the good supposedly done by New Deal spending programs? These didn’t increase the number of jobs in the economy, because the money spent on New Deal projects came from taxpayers who consequently had less money to spend on food, coats, cars, books and other things that would have stimulated the economy. This is a classic case of the seen versus the unseen — we can see the jobs created by New Deal spending, but we cannot see jobs destroyed by New Deal taxing."

The Sanders' plan to fix environmental damage while growing the influence of an already giant government should scare everyone, because this smoke and mirrors cult of climate change, mixed with the idolatry of big government, can only spell out more danger past the horizon for the American people if men like Bernie Sanders get their way. If Americans truly want a future where they can obtain economic freedom and personal liberty, its time to get educated and start calling these hoaxes and plans out for what they are: scams.