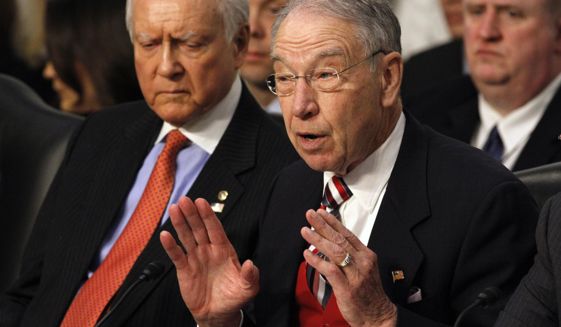 The CORRECTIONS Act, sponsored by Sens. John Cornyn (R-Texas) and Sheldon Whitehouse (D-R.I.), focuses on prison and reentry reforms designed to reduce the likelihood of an offender entering back into the system. Modeled after reforms implemented in Texas and Rhode Island, the bill requires regular risk assessments of eligible nonviolent offenders and classification of whether they are low-, medium- or high-risk of reoffending. Those who complete programs designed to lower their chances of reoffending can earn time credits that will allow them to serve up to 25 percent of their remaining sentence under community supervision.

Introduced by Sens. Mike Lee (R-Utah) and Dick Durbin (D-Ill.), the Smarter Sentencing Act, for which FreedomWorks has issued a letter of support, reduces mandatory minimum sentences for low-level, nonviolent offenders by half and, among other provisions, gets big government out of the courtroom by expanding the "safety valve" exception to these sentences for eligible offenders. It does not eliminate any mandatory minimums. The version of the Smarter Sentencing Act approved last year by the Senate Judiciary Committee would have saved $3 billion over a decade, according to the Congressional Budget Office.

When the Smarter Sentencing Act was reintroduced in February, Judiciary Committee Chairman Chuck Grassley (R-Iowa) signaled strong opposition. He has, however, softened his tone after pressure in his home state and has spearheaded the effort for reform in the Senate. Though rumors persist, the framework of the prison and sentencing reform hybrid has not been released and it may be a couple more weeks before an actual piece of legislation is rolled out.

One of the biggest selling points for justice reform for conservatives and libertarians is the cost-savings that states have seen. Texas, for example, implemented sensible prison and sentencing reforms, though with a small upfront cost, that focused on rehabilitation and treatment as alternatives to incarceration. By disrupting the cycle of crime through reducing offenders' chances of entering the system again, Texas closed prisons and scrapped plans to build new prisons. These reforms produced $3 billion in savings and contributed to reductions in crime and repeat offender rates.

Restoring common sense to sentencing and rehabilitating offenders through innovative and state-tested means to reduce their risks of going back to prison, of course, the purpose of this effort. Reducing the costs of incarceration is, however, just as important in the grand scheme.

Between FY 2000 and FY 2015, the Federal Bureau of Prisons’ budget grew by roughly 88 percent and the cost of housing just one prisoner annually jumped from $21,603 in FY 2000 to nearly $30,000 in FY 2013. As former federal prosecutors, judges, and other law enforcement officials recently explained, the growth of the BOP's budget is crowding out funding for other areas of law enforcement.

Needless to say, cost-savings are a necessity. Conservative and libertarian activists who have watched the groundbreaking reforms in Texas and other states have seen the cost-savings unfold, and they know that success can be duplicated at the federal level. Producing a piece of a justice reform legislation that will bring cost-savings over the long-term should be among the primary goals of any deal on prison and sentencing reform, particularly for the Republicans on the Senate Judiciary Committee negotiating the details of this important effort.