Earth Hour and the Anti-science Left 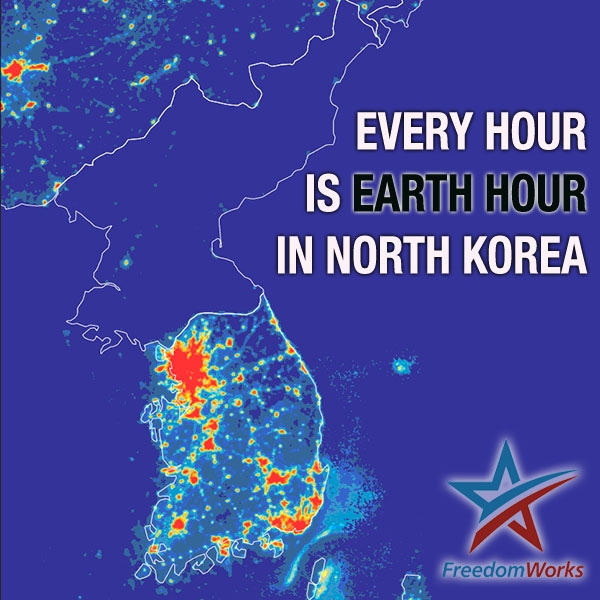 Saturday night, millions of people around the globe will turn off their lights from 8:30 to 9:30 p.m. to honor Earth Hour. Since 2007, environmental activists have promoted this Gaia-appeasing sacrifice to conserve energy and raise awareness about apocalyptic climate change.

The whole “awareness-raising” trend is annoying on general principle. Why raise awareness about fatal diseases when you can work to cure them? But what is hazy messaging for a public health campaign is decidedly counterproductive for the professed goals of this envirostunt. Earth Hour actually increases CO2 emissions.

Consider the activists' recommendation of replacing electric lights with candles for an hour. Candles are made from paraffin, i.e., refined crude oil, and are far less efficient than electric bulbs — even those dastardly incandescent light bulbs our government is so helpfully seizing from us. You would need about 40 candles to match the light produced by a 40-watt bulb, but just one candle cancels out any theoretical CO2 reduction.

Then there’s the effect of a mass off-switch/on-switch across an electrical grid. Power companies still pump the same amount of energy despite a brief dip in consumption. But when a large number of people simultaneously increase consumption at the end of Earth Hour, a surge often requires engineers to fire up additional coal- or oil-fueled resources.

And liberals claim that conservatives are anti-science.

What really chafes is the flamboyant hypocrisy of Earth Hour advocates. “Let’s turn off our lights, then upload millions of tweets, photos and videos using our smartphones and computers!” Because where’s the fun in saving the planet if you can't use electricity to brag about it every three minutes?

The facts show that Earth Hour is just another exercise in progressive posturing and self-congratulation. If conspicuous non-consumption saved the planet, we’d be able to run our cars on self-righteousness and moral preening.

Earth Hour is Puritanism for a post-Christian world.

Environmentalists have spent decades trying to turn electricity into a boogeyman. In doing so, they ignore science and threaten the health and safety of about half the world’s population. Environmental economist Bjørn Lomborg detailed the overwhelmingly positive impact of electricity on the world’s most vulnerable:

Similarly, electricity has allowed us to mechanize much of our world, ending most backbreaking work. The washing machine liberated women from spending endless hours carrying water and beating clothing on scrub boards. The refrigerator made it possible for almost everyone to eat more fruits and vegetables, and to stop eating rotten food, which is the main reason why the most prevalent cancer for men in the United States in 1930, stomach cancer, is the least prevalent now.

The counterproductive stunt of Earth Hour might make the anti-science Left feel better about themselves, but it only harms the planet and humanity at large. If activists want to improve the lives of the downtrodden, perhaps they can support the fracking boom that delivers clean, inexpensive natural gas to an energy-starved world.

It's actually Earth Hour much of the time for a large portion of the world's population, and due to lack of resources.

I didn't even know Earth Hour had happened, but I do know everything electrical I normally keep on at night, I kept on during that time.

I agree mostly. However, should we not be looking at ways to make fracking more environmentally friendly? What about the huge amounts of scarce water being used and then disposed of? Could any of this be re-used after some purifying? Are we holding the producers to account regarding pollution they are creating?