Pixar’s WALL-E presented a dystopian vision of humanity’s future as a result of our culture of disposable products. WALL-E (Waste Allocation Load Lifter Earth-Class) was the robot responsible for cleaning up an abandon earth trashed by consumerism and corporatism. This is an extreme vision of how many view electronic waste, known as E-waste, overrunning the United States if the government doesn’t step in to tackle our waste problem.  In reality, government creates more problems than it solves by placing burdens upon manufacturers for consumer behaviors and forcing recycling over better and more responsible market choices.

With the American ‘Newer is Better’ approach to electronics, the rates of disposing of old electronic goods have skyrocketed. According to a report by ABI Research, the e-waste market is expected to reach nearly $15 billion by 2015, up from $5.7 billion in 2009. Fortunately, a market has emerged to deal with the problems of E-Waste, refuting three major myths of government involvement in addressing E-waste.

Myth 1: Companies would rather dump waste in landfills than address E-Waste responsibly

The assumption of many government bureaucrats is that landfills are terrible. While Landfills may not be ideal environmentally, they are often the best option for companies.  E-Waste can cost hundreds of dollars as compared to dumping in landfills. Yet, as recycling is becoming cheaper and the resources more valuable, landfills will gradually be used less.

In fact, the worst solution landfills may be recycling mandates for many electronics. Current E-waste regulation has actually increased the amount of electronics in landfills. When California required companies to recycle E-waste, certain items were incredibly difficult and expensive to recycle. This led to people trashing thousands of computer monitors for “recycling,” which often ended up in landfills.

Myth 2: The Free Market will not address E-Waste Recycling

Not only will the free market handle E-Waste best, it already has begun discovering timely solutions. Manufacturers are recycling End-of-Life (EoL) products more efficiently and cost effectively than government. Dell, EBay, Gateway, Hewlett-Packard and IBM all have initiatives to reuse or recycle e-waste. Companies selling electronic products such as Verizon, Sprint, Staples and BestBuy have expanded electronic take-back initiatives for customers. While these companies may often lose money recycling, companies benefit through customers coming to their stores and improving their image as environmental friendly. 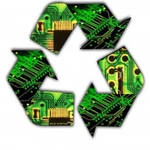 Myth 3: Exportation of E-Waste to Developing Countries is harmful

While some E-waste is exported to countries for recycling, the majority of E-waste in many countries is sold for reuse. A 2010 report showed that at least 87 percent of imported end-of-life computers went to reuse as opposed to recycling in Peru.  Much of the developing world including Africa, South America and Asia has lucrative markets in used electronics.

Yet, not all exported E-waste is resold for reuse. Much of the E-Waste is recycled in the slums of poor developing countries. The conditions are often dirty, dangerous and polluted but New York Times reporter Nicholas D. Kristof explains that recycling e-waste under “sweatshop conditions” is a luxury compared to the alternatives jobs or poverty saying “Talk to these families in the dump, and a job in a sweatshop is a cherished dream, an escalator out of poverty.”

Market solutions are rising up to address the E-waste problems just as markets have done throughout history. The market has provided number of solutions to address the growing ‘problem’ of E-waste by taking one man’s trash and turning it into another man’s treasure.

uptil I saw the check for $7536, I have faith that my neighbour woz like they say actually making money in their spare time on their laptop.. there sisters roommate haz done this less than seventeen months and resantly cleared the debts on their apartment and bourt a great new Chevrolet. this is where I went, kep2.ℂom

Thank the Department of Energy’s (DOE) “energy police” once again for limiting our consumer choices. This time, the DOE’s regulators are preparing to add computers and computer monitors to the checklist of controlled energy appliances.

The Obama Administration has given every indication that it will reignite the debate over the economically damaging carbon tax. This comes as no surprise. What should come as a surprise, however, is the willingness of some Republicans to be supportive of such a draconian tax. The conservative base must stand and let their voices be heard: No Carbon Tax.