In December 2010 it was revealed that top democrats, including Senator Harry Reid (D-NV), helped a Chinese firm get stimulus cash for a wind farm. Top Democratic fundraisers with links to the Obama White House were behind a proposed wind farm in Texas that stood to get $450 million in stimulus money, even though a Chinese company would operate the farm and its turbines would be built in China. The farm’s backers also had close ties with Senate Majority Leader Harry Reid and his campaign received thousands of dollars in donations from the wind farm’s backers. 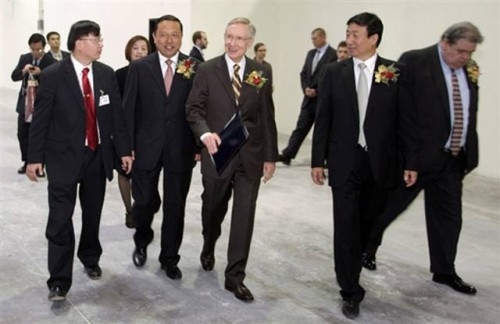 Three weeks before Election Day, Senate Majority leader Harry Reid, D-Nev., center, arrives for the dedication of a wind farm in Henderson, Nev., on Oct. 12, 2010. With him are, second from left, Kai Huang, deputy mayor of Shenyang, China; Jinxiang Lu, second from right, chairman and CEO of A-Power Energy Generation Systems, a Chinese company, and Tom Conway, right, International Vice President of the United Steelworkers Union. Reid's support, and the plan to create jobs in Nevada, helped blunt congressional criticism that stimulus money was going to the Chinese company, which also plans a large wind farm in West Texas. The company is hoping to receive money through the U.S. Energy Department. (MSNBC)

Well, Harry Reid is back at it.
This time he's helping out a Chinese solar firm that is represented by his son.
Las Vegas Review-Journal reported:

Say this about U.S. Sen. Harry Reid: He really believes in renewable energy.

Reid has beat up NV Energy pretty good in recent years. In the closing days of the George W. Bush administration, Reid blocked plans to build coal-fired power plants in Nevada. He said in April on the "Nevada Newsmakers" show, "I don't think NV Energy has done enough to allow renewable energy to thrive."

But that same month, NV Energy reported it had exceeded its state-imposed green-energy requirement of 15 percent by purchasing 16.7 percent of its power from renewable sources. And that was in spite of the Public Utilities Commission rejecting a handful of renewable contracts in July 2011, saying the company hadn't justified the purchases were necessary to meet its quota.

Now Reid is pushing for a Chinese company he played a key role in recruiting to Nevada, ENN Mojave Energy LLC. The company plans a billion-dollar solar energy manufacturing and generating plant near Laughlin, but an ambitious development schedule is being threatened by a lack of green power customers.

Steve Tetreault quoted Reid in Tuesday's Review-Journal saying the project "would start tomorrow if NV Energy would purchase the power," but the company "has not been willing to work on this and that's such a shame."

Reid added: "NV Energy is a regulated monopoly. They control 95 percent of all the electricity that is produced in Nevada and they should go along with this."

They're not, at least not yet.

And there are some legitimate reasons: Power costs are passed directly to consumers, and green energy currently costs more than power generated by coal-fired or natural-gas burning plants. State law mandates NV Energy buy power as cheaply as possible, except when it's required to buy more-expensive green energy to meet state-mandated quotas. But the more green energy you buy, the higher bills climb.

NV Energy has already met its quota, and the PUC has already turned the company down when it proposed contracts that would have exceeded quotas. And when the company does buy power - which it plans to do next in 2014 - it does so by analyzing competitive bids.

Reid says those weak excuses. He said in that April interview that if "NV Energy wanted to do more with renewable energy, they could."

There's another factor, however, one more personal to Reid: His son, Rory Reid, is one of the attorneys for the ENN Mojave Energy project. A Reid spokeswoman said the senator did not suggest Reid's firm - Lionel, Sawyer & Collins - to ENN, nor has the elder Reid spoken to this son about the deal.

And you wonder how Harry Reid became so wealthy?

Harry Reid Has No Shame