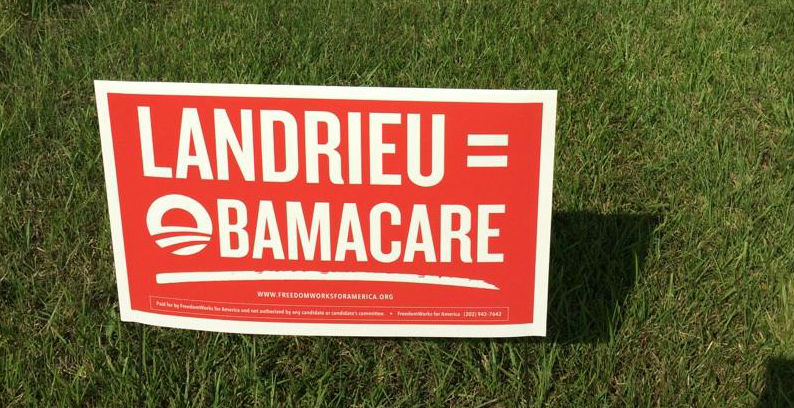 Faced with ominous chances for reelection, Sen. Mary Landrieu (D-LA) is pushing for a vote on the long-stalled northern section of the Keystone XL Pipeline before the December 6 runoff, according to recent media reports, and Democratic leaders seem willing to oblige.

One of the central themes in Landrieu's bid for reelection has been the influence she supposedly welds in the Senate, which, she claims, makes her "indispensable" to Louisiana. To bolster this theme, Majority Leader Harry Reid (D-NV) handed the Louisiana Democrat the gavel of the Senate Energy Committee.

Landrieu's influence, however, is greatly exaggerated. Though she has been a supporter of Keystone XL in the past, Landrieu was unable to convince Senate Democratic leaders to bring up legislation authorizing the pipeline to the floor for a vote.

With Landrieu's political future on the line, Senate Democrats are, apparently, reversing course in a pretty obvious attempt to bail her out.

"[A vote on Keystone XL] could happen as soon as tomorrow or it could happen two weeks from now, but all signs are pointing to something will happen in the near term," a Democratic aide told Politico earlier this week. Another Democratic aide said, "If that were to happen and Landrieu were to ask for a vote, it’s extremely unlikely that a Democrat would block it."

Regardless of whether this show vote happens or not, Landrieu hasn't been a friend to Louisiana on energy issues. She, for example, has given tens of thousands of dollars through her political action committee, JAZZ PAC, to radical environmentalists in the Senate, including Barbara Boxer (D-CA), Dick Durbin (D-IL), and Sheldon Whitehouse (D-RI). "Name an anti-oil-and-gas Democrat," the Wall Street Journal noted, "and JAZZ PAC has helped get him elected."

In November 2011, Landrieu voted against a resolution of disapproval on an EPA rule aimed at the coal industry. With an $800 million regulatory price tag, the rule was, at the time, the most expensive anti-coal regulation promulgated by the EPA. Thankfully, a federal appellate court struck it down.

Aside from energy issues, Landrieu has been among President Obama and Harry Reid's most reliable votes in the upper chamber. She voted for ObamaCare, and even doubled down on her support of the law while Pelican State residents were hurting because of it.

Keystone XL is not going to decide Landrieu's fate. Louisiana voters will see this for what it really is: a political stunt.

Legislators Push Conservative Policies Forward to Get Louisiana Back to Work

Part of a strong economy, both at the federal and state level, is a functional and healthy workforce. When a significant portion of your population is incapable of securing employment, crime rates go up and government funds become more significantly strained.

Landrieu and the Chamber: Will They or Won’t They?

There have been recent rumblings around Capitol Hill that the U.S. Chamber of Commerce is planning to throw its support behind Democratic Senator Mary Landrieu in Louisiana, with a representative saying that she supports pro-business legislation more often than Sen. Ted Cruz.

All Aboard… for Cronyism!

People often criticize capitalism as giving too much power to big business, and use this concern as a justification for more government intervention in the economy. But the kinds of business practices that are most damaging come not from free market competition, but from government-sponsored cronyism, where certain businesses are given legal advantage over others for political purposes.