Perhaps though, the American public has doubts about reports associated with employment because the administration has been caught making up numbers in the past.

The latest quarterly jobs report touted by the Department of Energy (DOE) shows how projects announced during that time period could create thousands of clean energy positions.  At the same time, the Recovery.gov web site has at least two entities that are reporting job numbers based on a completely ridiculous metric known as 'lives touched'.

The first is a $12 million grant awarded to an organization known as the Triangle J Council of Governments, for use on a project in the Carolina Blue Skies Initiative.  That $12 million grant according to second quarter reports, has created zero jobs, retained nearly six, but has also touched the lives of 36 people.  From zero jobs to 36 is quite the markup. 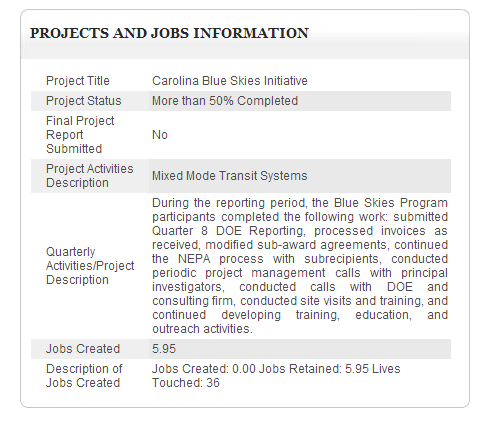 The phrase first started appearing in the summer of 2010, when the stimulus bill or Recovery Act was being hailed as the savior in a so-called economic 'Summer of Recovery'.  A Government Accountability Office (GAO) report had mentioned that the DOE was calculating and publicizing different figures which were meant to represent the number of jobs created, one of which was referred to as lives touched.

One particular company known as CH2M Hill was actively promoting the number of lives touched on their website.  They had received nearly $2 billion in stimulus money for environmental cleanup projects, $10 million of which went to designing the elaborate Solyndra facility in Fremont, California.

When questioned, a spokesperson for CH2M Hill gave this explanation:

Essentially, the administration, through the DOE had found a way to inflate job numbers resulting from the stimulus bill by counting the very vague metric - ‘people who at some point have supported a project'.

Specific reporting instructions given to contractors provide further detail into what exactly constitutes a touched individual.  The phrase is defined as "(the) total number of workers who have directly charged 1 or more hours of work time to a ... contract."

One hour of work.  One life touched.

Additionally, those who come onto a project for that very limited amount of time will never be removed from the reports according to the instructions provided.  In essence, a part-time employee could work a few hours in the first quarter of 2010, and he/she will still be counted in reports in 2012.

And while the above cited examples may seem small on a backdrop of overall employment, the true ability to inflate those numbers can be seen in the chart below, a Recovery Act Jobs report through September of 2011 at Hanford, the location for the bulk of CH2M Hill's work. 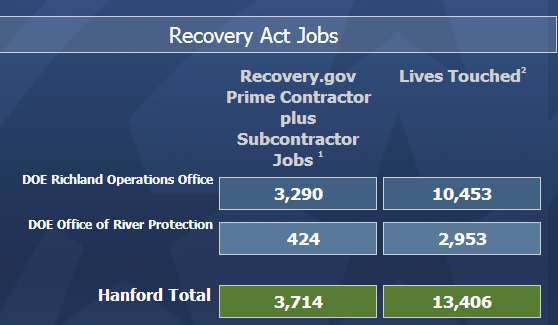 Notice the actual jobs column on the left, and the number of lives touched on the right - a 361% inflation.

The aforementioned GAO report also came to the same conclusion, stating that calculations from the DOE "ranged from about 5,700 jobs to 20,200, depending on the methodology used."  The GAO also added that these calculations are "problematic because they are confusing and potentially misleading".

The importance of this number-fudging coming predominantly from the DOE cannot be understated.  As an ardent supporter of green jobs initiatives, the President would naturally want to promote higher numbers when at all possible to sell that particular energy sector as economically viable.

A House Oversight Committee hearing this past summer revealed another aspect to this, citing that the DOE had broadened the description of a "green job" to include such positions as bus driver, a Salvation Army employee, a floor sweeper at a solar plant, or a bicycle shop clerk.

This revelation prompted committee chair Darrell Issa to state that such job inflation was done for "clearly political purposes", in the hopes that billions of taxpayer dollars being used to support environmentally-focused jobs could be justified.

Unfortunately, politics and the overall deception on employment numbers created by the Obama administration is touching our lives and unemployment rates.

Whether it is created, saved, funded, or touched, the Obama administration's smoke and mirrors tactics continue.  At least until November.