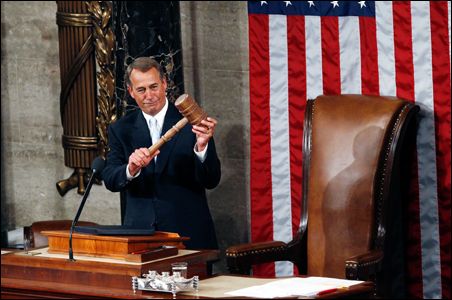 December’s disgraceful CRomnibus debacle fresh in mind, House conservatives may finally be ready to hand the most powerful gavel in the House from John Boehner to a more principled leader when they vote for Speaker of the House on January 6th. Replacing Boehner is both possible and necessary for a multitude of reasons, but it’s important to understand how the vote works in order to counter the misinformation that has already started coming from those with a vested interest in keeping the status quo.

Under the Constitution, the Speaker of the House must be elected each Congress by a majority of present Members of the House – 218 votes at the current count – and the Speaker election must occur before any other business in the new Congress. Although both parties typically nominate a single candidate before the vote takes place, any Member of the House can vote for any person to become Speaker – they can even vote for someone who is not in Congress at all!

This means that under the current numbers (246 Republicans to 188 Democrats) only 29 Republicans need to vote for someone other than Boehner in order to force another vote. The House will hold as many votes as necessary until one individual gets to the magic 218.

An important point to take away from this is that there is literally no way the Democrats could get the necessary votes to elect a Speaker of their choice unless a large number of Republicans were to join them. The charge that voting against Boehner could lead to a Speaker Pelosi (an accusation that was tossed around last time in 2013 and is sure to come back) is ridiculous and impossible.

At least two conservative members so far, Reps. Ted Yoho (FL) and Louie Gohmert (TX), have stepped up as possible alternatives to Boehner, and many more have publicly refused to vote for him. There's no question at this point that there enough conservatives who are dissatisfied with Boehner's leadership to keep him from a third term as Speaker if they were to stand together.

But voting against the sitting Speaker of the House is a huge political risk for anyone involved – Leadership can kick them off of committees, make it impossible for their bills to get a vote, and even support primary challengers against them. Polls already show a large majority of Republican voters want a new Speaker, but the Republicans in Congress need to hear from you, to know that their constituents stand with them. It’s crucial to send messages and phone calls to their offices to help bolster their resolve.

Send Your Rep a Message
Tags Speaker of the House
Log in or register to post comments.
2 comments

I may at this point have more contempt for Boner (a huge Republican mistake) than for His Majesty King Barack. At least you can trust a Democrat to be a Democrat. But it's difficult to take these Democrats in Republican Clothing (DIRKs).

The Next Speaker Must Do Something about Spending

With Paul Ryan still sitting squarely on the fence about whether or not he will run for Speaker of the House, the Republican leadership elections still remain largely up in the air. There has so far been a troubling inability of the conference to identify a suitable candidate who embodies the values that are important to an open congressional process, and who could garner enough support to actually win the election.

On Wednesday evening, FreedomWorks was proud to host a town hall meeting with Congressman Thomas Massie in the Cincinnati suburban community of Erlanger, Kentucky. The event was co-hosted with the Northern Kentucky Tea Party, a group of local grassroots activists fighting for fiscal responsibility, limited government, and free markets. Mr. Massie has a lifetime FreedomWorks score of 94%, indicating a pristine pro-liberty voting record.