Report: Solyndra gave "false and misleading" information to secure loan from the government 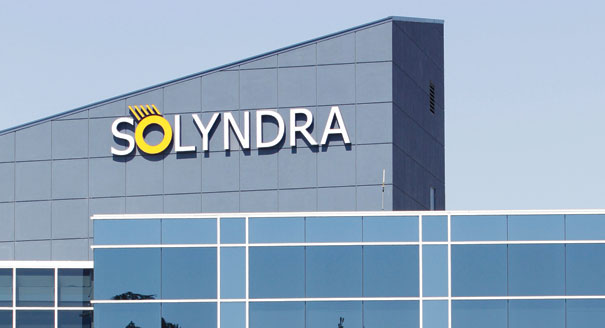 A new report from the Office of the Inspector General of the Department of Energy comes down hard on Solyndra, the now-bankrupt solar energy firm that, in September 2009, received a $535 million government-backed loan. The loan was funded by President Barack Obama's 2009 stimulus package, which wasted some $50 billion on green programs.

The White House pushed the Department of Energy to approve the loan so Vice President Joe Biden could announce it at the opening of the Solyndra plant in Fremont in September 2009. "By investing in the infrastructure and technology of the future," Biden declared, "we are not only creating jobs today, but laying the foundation for long-term growth in the 21st-century economy."

Two years after receiving the loan, in September 2011, Solyndra shuttered its operation and filed for Chapter 11 bankruptcy. Approximately 1,100 employees who worked at the green energy firm's Fremont, California headquarters lost their jobs. "Regulatory and policy uncertainties in recent months created significant near-term excess supply and price erosion," Brian Harrison, the firm's CEO and president, said in an announcement. "Raising incremental capital in this environment was not possible. This was an unexpected outcome and is most unfortunate."

Typically, green firms rely on government subsidies, through tax credits to consumers and government-backed loans, to survive because the market for energy alternatives, such as solar, is not sustainable. In fact, Solyndra, which also received subsidies through the Export-Import Bank, is but one of at least 34 green energy firms that received government support that experienced financial problems or filed for bankruptcy. "The truth is that the problem is widespread," Ashe Schow wrote in October 2012. "The government’s picking winners and losers in the energy market has cost taxpayers billions of dollars, and the rate of failure, cronyism, and corruption at the companies receiving the subsidies is substantial."

The report rakes Solyndra over the coals (pun intended) for "false and misleading information" supplied to Department of Energy loan officers during the application process. "Solyndra provided the Department with statements, assertions, and certifications that were inaccurate and misleading, misrepresented known facts, and, in some instances, omitted information that was highly relevant to key decisions in the process to award and execute the $535 million loan guarantee," the report states. "In our view, the investigative record suggests that the actions of certain Solyndra officials were, at best, reckless and irresponsible or, at worst, an orchestrated effort to knowingly and intentionally deceive and mislead the Department."

Solyndra's lack of transparency led to an FBI raid at its headquarters just days after announcing its closure. Despite the FBI investigation and the findings in the Department of Energy inspector general's report, Department of Justice will not seek criminal charges against the firm's former executives, the fo reveals. Taxpayers' losses on the loan to Solyndra is "likely to exceed $500 million."

Though Solyndra is thoroughly blasted in the report for lying to the Department of Energy, loan officers who oversaw the process do not escape without criticism. "Employees acknowledged that they felt tremendous pressure, in general, to process loan guarantee applications," the report notes. "They suggested the pressure was based on the significant interest in the program from Department leadership, the Administration, Congress, and the applicants."

Still, loan officers dropped the ball. "Solyndra furnished information to the Department relating to sales activities and projections as it worked to secure loan guarantee funding," the report explains, "and the Department missed opportunities at several junctures to critically analyze the information."

Of course, the problem with Solyndra and other green energy companies is more than the loan approval process; it is that administrations and politicians are using their positions to dole out favors to politically connected cronies. One of Solyndra's top investors, George Kaiser, for example, was a bundler for Obama's presidential campaign.

Businesses, no matter their risk level, should rise or fall on their own merits, without any subsidies from the government. That should go for green firms that produce solar panels, insurance companies that sell expensive ObamaCare plans, banks that make risky homes loans, and manufacterers that want to export their products overseas. Government exists to the protect rights and security of the people, not to put taxpayers on the hook for bad business decisions or products that lack a sustainable market.

This happened almost 7 years ago. Too late for use in the 2012 election I'm afraid...

Key Vote NO on the Energy Policy Modernization Act, S. 2012

As one of our over 5.7 million FreedomWorks activists nationwide, I urge you to contact your senators and ask them to vote NO on the Energy Policy Modernization Act. S. 2012. This bill contains a grab bag of small provisions that add up to a major expansion of the federal government’s incessant meddling in the energy sector.