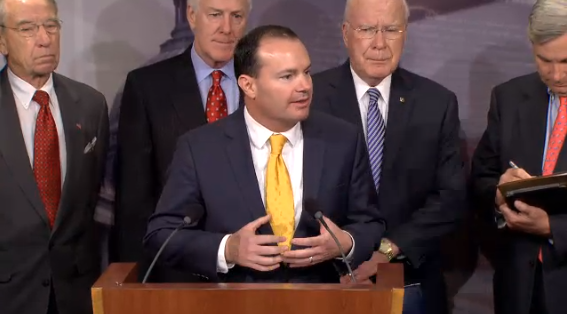 Sen. Mike Lee (R-Utah) was involved in the negotiations on the Sentencing Reform and Corrections Act.

This morning, after months of negotiations, a bipartisan group of senators, led by Judiciary Committee Chairman Chuck Grassley (R-Iowa), unveiled a historic justice reform compromise. The Sentencing Reform and Corrections Act would bring a number of reforms to the federal prison system, including an expansion of the "safety valve" exception to mandatory minimum sentences, the creation of a second "safety valve," and rehabilitative programs designed to reduce recidivism, or repeat offenses.

Before diving into the details of the bill, it is remarkable that a bill, even one as modest as this, has been introduced by Grassley. In March, Grassley assailed the Smarter Sentencing Act, which FreedomWorks supports, for its proposed reductions to costly mandatory minimum sentences. The Iowa Republican has since softened his tone and shown an interest in some sentencing reforms. Grassley not only came to the table to help forge this bill with senators with different perspectives -- including Mike Lee (R-Utah), Dick Durbin (D-Ill.), John Cornyn (R-Texas), and Sheldon Whitehouse (D-R.I.) -- but he is also the lead sponsor.

Between 1980 and 2013, the federal prison population grew by nearly 800 percent, rising from approximately 25,000 prisoners to more than 219,000. The Federal Bureau of Prisons' budget grew from $970 million to $6.7 billion over the same period, according to Pew Trusts, and the cost of housing one federal prisoner jumped from $21,603 to just under $30,000. In short, the status quo is unsustainable, as it crowds out other law enforcement needs and, because federal prisoners are essentially warehoused, makes communities less safe.

One of the reasons for the substantial increase in the federal prison population and related costs over this period is mandatory minimum sentencing, a big government and purportedly "tough on crime" policy that has actually had a negative impact on many communities. Despite what some may say, these sentences did not contribute to the drop in crime across the United States.

The Sentencing Reform and Corrections Act addresses sentencing in several ways. The bill, which adopts many of the principles of the Smarter Sentencing Act, expands the existing federal "safety valve" exception to mandatory minimum sentences to four criminal history points. This means more low-level, nonviolent offenders will be eligible to receive sentences that fit the crime they committed. Offenders with a prior 3-point felony, such as a violent crime or drug trafficking conviction, would not be eligible. It creates a second "safety valve" that would allow a judge discretion to wave previous offenses that would have disqualified an offender from the exception.

The bill makes the provisions of the 2010 Fair Sentencing Act retroactive. Prior to passage of the Fair Sentencing Act, a person would have to sell 100 times the amount of powdered cocaine to trigger the same 5-, 10-, or 20-year mandatory minimum required for crack cocaine. This law, which passed Congress without opposition, reduced the sentencing disparity between crack cocaine and powdered cocaine from 100-to-1 to 18-to-1. This provision will allow thousands of offenders to apply for retroactivity to reduce their sentences.

Another reform included in the sentencing provisions is a reduction in the maximum penalty under federal three-strike law to 25 years from life. The minimum penalty is reduced to 15 years from 20 years. The offenses that trigger these sentences have been modified, as well, to include only serious drug felonies and violent crimes. Two new mandatory minimum sentences have been created, one for interstate domestic violence and another for those who provide weapons to blacklisted countries and terrorists. The bill also requires a report and complete inventory of all federal criminal offenses, including regulations that carry criminal penalties.

"These laws require many nonviolent offenders to spend years in prison, often with few opportunities for meaningful reform," Lee said during the press conference on Thursday. "Today's legislation addresses both of these problems by reducing mandatory minimums and by expanding opportunities for programs that have been proven to reduce recidivism."

The corrections reform aspects of the bill are modeled after those implemented in conservative states like Texas and Georgia. It requires the Federal Bureau of Prisons to implement data-driven and proven rehabilitative programming available to eligible prisoners, those who have 12 or fewer criminal history points. The Bureau of Prisons has six years to implement the programs. Eligible prisoners can earn up to five days time credit for every 30 days of successfully completed programming.

"This legislation is modeled after successful Texas reforms that have rehabilitated prisoners, reduced crime rates, and saved taxpayer dollars," said Cornyn, whose CORRECTIONS Act served as the basis for the corrections reforms in the compromise. "This bipartisan package will protect law enforcement’s ability to aggressively target violent criminals and serious offenders, while focusing on justice, rehabilitation, and public safety."

All federal prisoners will be required to undergo a post-sentencing risk and needs assessment. Prisoners will be categorized by low- moderate- or high-risk of recidivism. These classifications will help determine offenders' needs to lower their risk. Those not classified as low-risk will continue to be periodically reevaluated to measure progress. Those earn time credits will be able to complete their sentences in prerelease custody in home confinement or community supervision. Prisoners over the age of 60 with no violent criminal history will be eligible for compassionate release. This provision will also be available to terminally ill prisoners.

The Sentencing Reform and Corrections Act includes some juvenile justice reforms, such as parole for young offenders and limitations on the use of solitary confinement. The bill will allow nonviolent juveniles not tried as adults in federal court to petition to have their records sealed or expunged. This provision is similar to the REDEEM Act, for which FreedomWorks issued a letter of support. It would allow young people who have made mistakes the opportunity to better themselves without the burden of a criminal record hanging over their heads.

Obviously, FreedomWorks is concerned about the cost of the bill, particularly the corrections reforms included in the bill. Of course, these provisions will come with an initial upfront cost. Texas, for example, appropriated $241 million in 2007 to develop and implement its groundbreaking reforms. The savings over the long term have exceeded $3 billion.

A score from the Congressional Budget Office may not include cost aversion; that is, savings from a reduced recidivism rate. The idea, much like the states that have gone big on justice reform, is reducing recidivism will save taxpayers money in the long run. This is partially how Texas achieved its $3 billion in savings. Savings are what makes the Smarter Sentencing Act so attractive. Not only is the bill good policy, a previous iteration of the bill would have saved $3 billion over ten years and nearly $24 billion over 20 years.

While many of the provisions of the Sentencing Reform and Corrections Act are good policy worthy of passage, an estimate showing cost savings or prison beds saved over the long term is an absolute necessity.