This week the House and Senate will likely vote on their budget plans, along with a few conservative alternative budgets.

To help you see where each plan stands in terms of spending restraint and economic growth, we have put together our second annual "Budget Report Card", which rates each of the major plans according to various economic criteria.

But for the third straight year, Senator Paul's budget wins "best in show" for not only balancing quickly, but for shifting taxes to a single-rate flat tax and truly reforming all three of the "big three" entitlements (Medicare, Medicaid, Social Security). 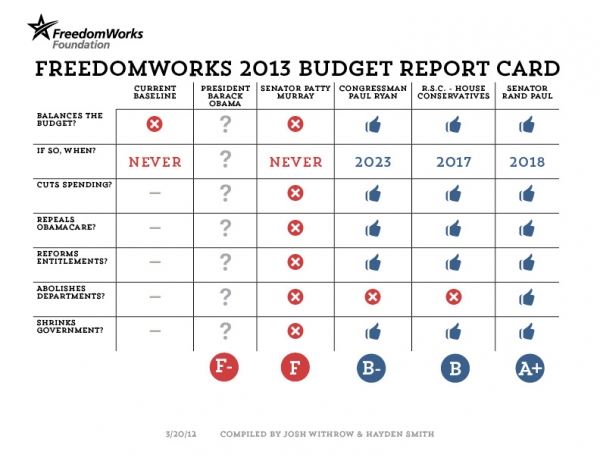 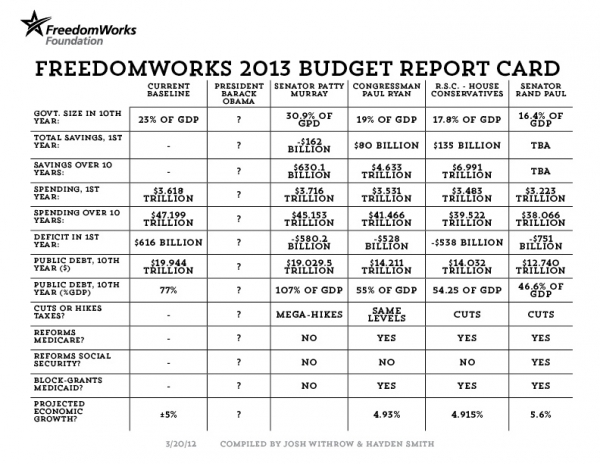 The House passed a version of Paul Ryan's budget in both 2011 and 2012, but their budget failed in the Senate each time. Meanwhile, if the Senate were to pass any budget resolution, it would be the first time they have done so in nearly four years.  The government has been running on temporary continuing resolutions during that time.

OUR ONLY CHANCE TO REVITALIZE AMERICA!!!

I HOPE FREEDOM WORKS WILL FUND HIM, THE KOCK BROTHERS MUST GIVE 15 BILLION DOLLARS!!!!

I'm curious, why did you chose Patty Murray?