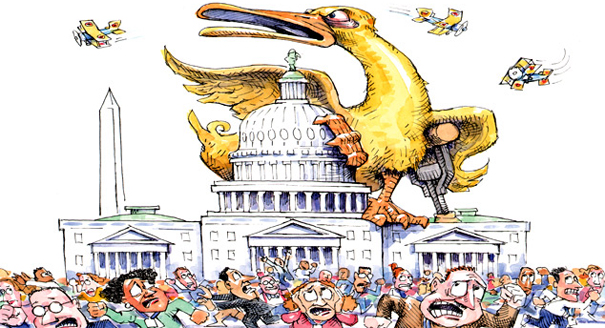 For years, our Congress has failed to pass a budget, violating a paramount, constitutional prerogative and duty. Congress is the only body of government that makes the laws for our country; even President Obama is unable dictate our budgets through his executive order. So, failing to pass a budget, which is necessary to keep our government operating, forces Congress to pass a continuing resolution (CR). Continuing resolutions fund our government for a pre-set length of time, and invariably include lots of our favorite projects – some valid (but not independently promulgate) but most are pure "pork."

The continuing resolution creates enormous opportunities to “log roll,” where politicians trade their “pork” for another pols’ “pork.” This year, the trade-offs were numerous and ever-changing, some of which include eradicating the Zika virus, opioid abuse, Import-Export Bank, Detroit water system, Louisiana flood relief, or turning over the Internet to ICANN. The list can expand or contract depending on what our politicians use as a bargain and how they pander to their constituencies.

Of course, funding for Planned Parenthood is always a political imbroglio, and it is currently in play. Political gamesmanship targets our national defense, and there is always a ploy for more social spending as a trade-off to the lack of curtailing military spending. In other words, it is politics as usual with Republicans and Democrats playing to their constituencies at the expense of We the People.

Having a continuing resolution contains many subjects of great importance, which should be debated and discussed individually and in public. The CR eliminates most of the public discourse and congressional scrutiny, and, therefore invariably leads to increased spending and debt.

Worse, this CR could lead to a Lame Duck Session:

Democrats and Republicans both agreed, the CR is scheduled to expire in early December 2016, conveniently after the November elections and before a new president and members of Congress are sworn into office, violating the essence of our Republic and representative government. It also violates the 20th Amendment intended to stop a Lame Duck session except for national emergencies. Many of our past Congresses have basically ignored our Constitution and the 20th Amendment.

Worse, the CR Increases the Debt:

Harmfully, our future is dictated by government debt, and ruling by CR exposes the dangerous indifference of Congress and the president to a debt that has doubled in the last eight years. Neither President Obama or Congress have been honest and forthright concerning the debt burden they are placing on the future workers of America.

Worse, the CR Exposes Congress and the President lack of concern over Honest and Good Governance: