For instance, New York Times columnist Paul Krugman tells us that quantitative easing will boost the housing market. “It’s good to see the Fed doing more,” he wrote. But, as Washington Post reporter Brad Plumer explains, it will take about six months for the effects of QE3 to kick in. In other words, they’re saying, we have to print money so that we can find out why.

Let’s remember — we can’t obtain these short-term “benefits” without experiencing the long-term disaster of turbulent business cycles and a devalued currency. Here are four graphs that we hope will remind voters about the economic realities of central banking.

Before and After the Housing Bubble 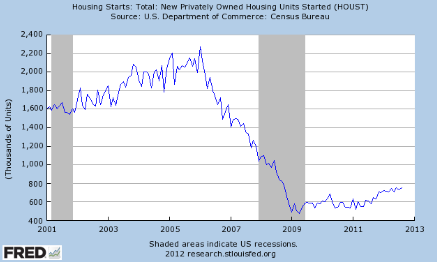 The graph above — obtained from the Federal Reserve Bank of St. Louis — reflects the “before and after” conditions of the mortgage crisis with the blue line specifically depicting the number of new privately owned housing units started. A handful of academics decided during Bush’s first term that the housing sector wasn’t productive enough. Keynesians followed suit and suggested, in Krugman's own words, “Alan Greenspan needs to create a housing bubble to replace the Nasdaq bubble.”

And that he did.

A mixture of the Fed’s low interest rates and Congress’s bending-over for Freddie Mac and Fannie Mae was the ignition the housing bubble needed. The sector swelled nearly 50 percent throughout the early 2000s, and Keynesians were happy to see such out-of-the-ordinary risk-taking. However, as Austrian economists warned, the bubble popped, falling back to its point of origin even quicker than it rose and eventually shattering at a low that hadn’t been witnessed in more than 50 years of the Fed’s documentation.

Millions of families — whose net worths were largely invested in their homes — have lost drastic amounts in equity value and would have been much better off without the bubble having taken place at all. The money spent and resources misallocated in order to spur the sector were not, in any which way, worth the outcome.

How Much Money the Fed Prints 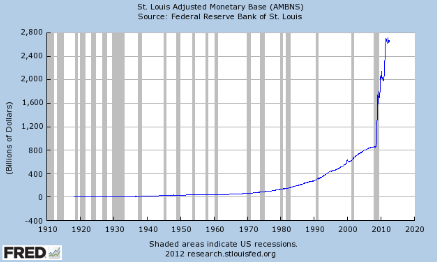 The graph above — obtained from the Federal Reserve Bank of St. Louis — measures the adjusted monetary base. The money supply is relatively stable until the late 1930s under Franklin Roosevelt, but it has increased ever since, which means the USD is worth less and less each year. Particularly stunning is the vertical line first appearing in October 2008. This is the money injected for the bank bailout. And it continues skyrocketing due to the stimulus package, the auto bailout, and the current administration’s other surprises.

Simply stated — the Fed managed to triple our monetary supply in only six years. It’s almost impossible to fathom the effect this will have on prices, especially if American production industries struggle as a result of taxes, regulations, et cetera. 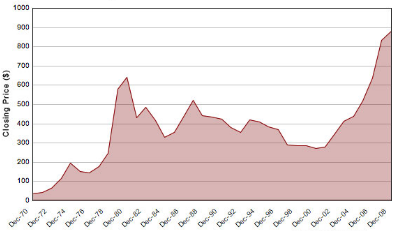 The graph above — obtained from Forbes — demonstrates gold’s resistance to economic downturns. Its price fluctuates depending upon supply and demand. However, we’re interested in two points on this graph where the price suddenly climaxes: (1) the 1970s, and (2) the 2000s.

We discussed the 2000s in our previous graphs. A rough business cycle, crony capitalism, monetary inflation, unnecessary regulations, and looming insecurities all contributed to today’s bleak business environment. Yet, in all its glory, the price of gold exceeded (and still exceeds) everyone’s expectations. Lucky are those who purchased it immediately after the turn of the millennium. Their money certainly was not devalued.

Not too many young libertarians understand that the 1970s is a direct consequence of the “Nixon Shock.” The 1970s are famous as a period of stagflation (i.e., high inflation, high unemployment, and slow growth). Nixon implemented wage and cost controls in 1971 — which started as a 90-day freeze and ultimately lasted into 1974 — so price inflation reached double-digits. That’s why you see a small climax on the graph around 1974.

Nixon left office abruptly in August, at which point confidence in the dollar grew slightly, but it wasn’t enough to outweigh the former president’s decision to end convertibility between the dollar and gold. Thus, the latter flourished as the former decayed years later.

Why These Graphs Matter

Julie Borowski explained Wednesday that the U.S. fell to the 18th most economically free country. The Federal Reserve is a major reason for this embarrassing decline. Until policymakers realize that we shouldn’t sacrifice long-term prosperity for short-term gains, our freedom rank will continue to drown — and our dollar will, too.