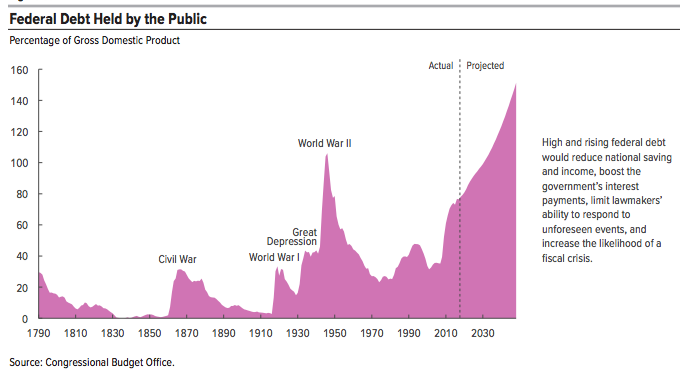 On Tuesday, the Congressional Budget Office (CBO) released The 2018 Long Term Budget Outlook. This is an annual report that offers a look at the federal budget over a 30-year window. It would be an understatement to say that Congress faces significant challenges, particularly in the area of mandatory spending, also known as “direct spending,” which includes federal entitlement programs like Medicare and Social Security.

Much has been made about the impact of the Tax Cuts and Jobs Act, H.R. 1, on budget deficits and debt. Of course, those who make this argument, typically Democrats, ignore federal spending. Separately, most Republicans have abandoned their rhetoric about reducing federal spending.

The passage of the Bipartisan Budget Act, H.R.1892, boosted discretionary federal spending by nearly $300 billion over two years. This budget set spending levels for discretionary spending at $1.291 trillion for FY 2018 and $1.321 trillion for FY 2019. More likely than not, the Bipartisan Budget Act increased the baseline at which the budget committees will determine federal spending in years after 2019, which will lead to higher spending than CBO reports about the budget will show.

The CBO shows that federal spending will be 20.6 percent of gross domestic product in 2018. For those not familiar with the term “gross domestic product,” of GDP, it is the value of all goods and services produced by a country in a quarter or year. In April, the CBO projected that GDP will be more than $20.1 trillion.

In 2018, revenues are expected to come in around 16.6 percent of the economy. Federal spending will be around 20.6 percent, which is roughly the average for federal outlays between 1968 and 2017. The budget deficit is just under 4 percent of GDP and the share of the national debt held by the public is 78 percent.

Although the CBO notes that its short- and long-term projections are uncertain, the picture begins to look precarious in the current ten-year budget window, 2019 through 2028. The projected annual average revenues are 17.5 percent of GDP while federal spending will consume an average 22.4 percent. The budget deficit will represent 4.5 percent of the economy. Debt held by the public is projected to average 96 percent of GDP.

Now, the share of the debt held by the public is a concern. The debt-to-GDP ratio is an important data point. An August 2010 working paper published by the World Bank made the case that the tipping point threshold for debt-to-GDP is 77 percent. “If debt is above this threshold,” the authors explained, “each additional percentage point of debt costs 0.017 percentage points of annual real growth.”

Essentially, Congress isn’t only putting debt on the backs of future taxpayers, debt is harming economic growth. None of this is to say that Congress can’t address the underlying problems, but, let’s be honest, there’s no reason to believe that the political will is there at the moment. But if Congress doesn’t get a handle on federal spending, our fiscal situation will spiral out of control.

Ultimately, the real problem is spending, particularly mandatory spending. As the chart below shows, mandatory spending will consume a greater share of the economy over time, averaging 17.2 percent of GDP between 2039 and 2048. 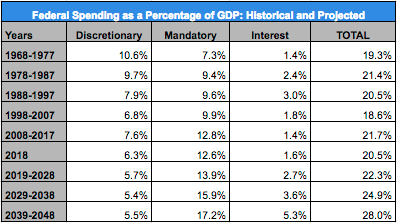 During the debt limit debate in April 2010, then-House Budget Committee Ranking Member Paul Ryan (R-Wis.) said, “We have before us the most predictable economic crisis that we have ever had in this country. We all know that. We also are getting a good grasp of the size and the magnitude of this crisis. Sovereign debt crises are popping up all over the world, and we are kidding ourselves if we don’t think it could come to us next.”

At the time of Ryan’s comments, which were made during the first meeting of the National Commission on Fiscal Responsibility and Reform, Congress was in the midst of its second of four consecutive years of budget deficits that exceeded $1 trillion. Little has changed. What was true then is even truer now. Indeed, all the lights are flashing red, and most members of Congress either deny that there is a problem or are willfully ignoring for the successors to address.