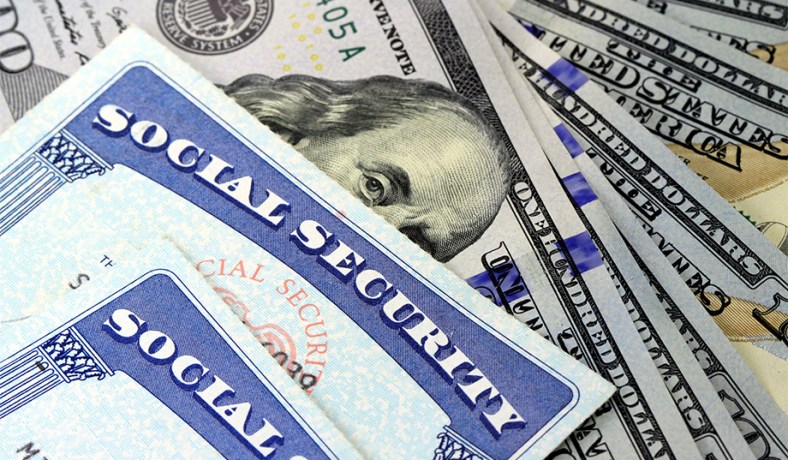 Let's look at the discretionary spending levels for FY 2018. The Bipartisan Budget Act set the discretionary spending levels for FY 2018 at $700 billion for defense and $591 billion for nondefense programs. This is a $143 billion increase over the previously established spending levels. But in the latest budget outlook report from the Congressional Budget Office, the federal government will spend $4.142 trillion this year, 61.5 percent of which for mandatory programs, or direct spending. The pie chart below shows the breakdown in categories of federal spending (click here for an enlarged version): 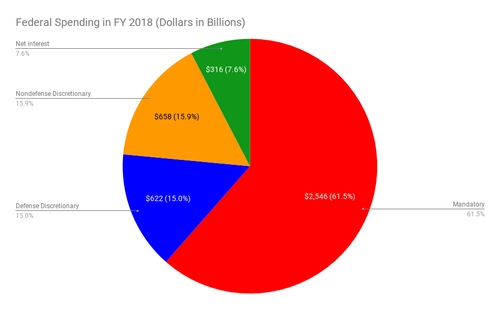 Mandatory spending is spending that is already baked in the budgetary cake. The spending for this programs is, as the description of this part of the budget suggests, is mandated by law. Congress would have to pass legislation to alter the expenditures for these programs. The largest mandatory programs are Social Security ($984 billion in 2018), Medicare ($707 billion), and Medicaid ($383 billion). But mandatory spending also includes ObamaCare subsidies, the Children's Health Insurance Program, the Supplemental Nutrition Assistance Program, federal pensions, and veterans programs. 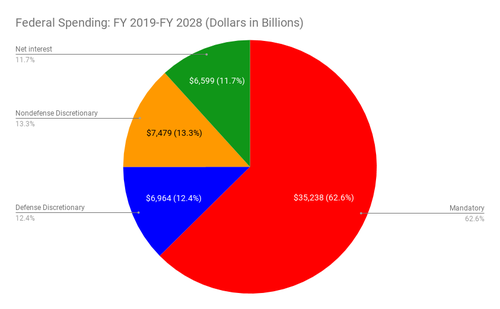 It is clear that mandatory spending and interest on the national debt will quickly diminish the size of discretionary spending relative to the rest of the federal budget over the next ten years alone. This trend of mandatory spending growing at a rate significantly faster than discretionary spending has been occurring since the establishment of Medicare and Medicaid, and amplified by the growing population entitled to Social Security, which together make up the overwhelming bulk of the welfare state.

Congress cannot even agree to limit discretionary spending which they have direct control over, as established clearly in this year's budget and appropriations legislation, the Bipartisan Budget Act and the Consolidated Appropriations Act. Such inability to be fiscally responsible with the easiest-to-address portion of the budget indicates both a spending addiction among our elected officials.

More importantly, however, lack of restraint on discretionary spending displays a severe lack of the political will needed to tackle the much more deeply-entrenched and fast-growing mandatory wedge of the federal budget created by entitlement programs and welfare. Any serious proposal to cap federal spending and return our country to fiscal sanity must, beyond a shadow of a doubt, include mandatory spending in its scope in order to truly address the root of our spending problems. It remains to be seen how, if, and when this will be done.

This is exactly what I was looking for. Thanks for sharing this great article! That is very interesting Smile I love reading and I am always searching for informative information like this

KissAnime is one of the best anime streaming sites where you can find English dubbed and subbed anime with high quality.

I really like your post Thank you for such a well written article. It’s full of insightful information and entertaining descriptions. Your point of view is the best among many
satta-no.com

iPhone 7 Plus Cases fortnitephonecase.com/iPhone-7-Plus-Cases I love the info on your internet site. Thank you so much.

This affected play greatly as both teams found it difficult to mount a sustained attack that could produce a goal. https://worthgram.com/what-happens-when-you-block-someone-on-snapchat/

Thanks for updating with this sort of information. I am adopting your blog for further information in the future. https://techlipz.com/kissanime/

From that blog we have been added to our information about the different things about which we have to take great care with the change in the seasons.
https://www.productivityapps.org/

This blog has made progress very quickly. Because the blog has an important information about this
https://99tech.co.uk/vodafone-sure-signal/

This is first time that I visit here. I found so many exciting matter in this particular blog, One thing I would like to request you that pls keep posting such type of informatics blog. https://likeswatch.co.uk/

I want to say that this post is awesome, nice written and come with approximately all significant info. I'd like to look more posts like this.
https://www.hjackets.com/category/mens-bomber-jacket/

This is exactly what I was looking for. Thanks for sharing this great article! That is very interesting Smile I love reading and I am always searching for informative information like this!
https://www.moviesjacket.com/blog/captain-marvel-costume/