The White House is touting something called "Promise Zones" as a model to spur economic growth. These areas feature federal spending with the usual strings attached, attempting to spur economic growth and civic renewal. What the country needs is not set of federally micromanaged zones, but to restore the original American promise for all of the us: here we can be free. 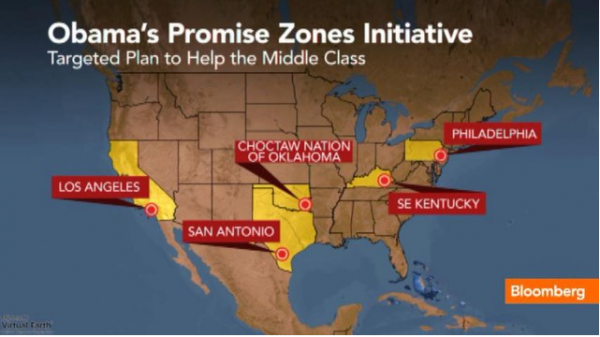 It's Deja Vu All Over Again

The Promise Zone Initiative is a spin-off of Enterprise Zones, hailed in the 1990s as a means to turn around deteriorating communities. Enterprise Zones didn't work very well.

As mentioned on the Cato Daily Podcast, others saw that Enterprise Zones failed because there is more to a failing city or region than a failed economy. A LEAP Zone is a special legal, economic, administrative, political jurisdiction, designed to remove obstacles to progress.  A Promise Zone is a LEAP Zone turned on its back.

On the positive side, the Promise Zone Initiative is more than just economics. On the other hand, the solutions offer more of the same governmental solutions that caused the problems.

According to the Promise Zone application guide (pdf) (emphasis added)

All lead organizations of designated Promise Zones, implementation partners in the Promise Zone strategies and any federal grantees whose federally funded work contributes to Promise Zone strategies will be required to participate in evaluations of Promise Zone and related federal grant activities that may be conducted from time to time. Lead organizations, implementation partners and federal grantees contributing to Promise Zones must agree to work with evaluators designated by federal agencies, including providing access to program personnel and all relevant programmatic and administrative data as specified by the evaluator(s) under the direction of a federal agency, during and after the term of the Promise Zone designation and/or grant agreement.

In other words, rather than freeing these places of the regulations that have bound the country into economic knots, the Promise Zone initiative will add a layer of regulation on top of what's already there.

Several affected federal departments and agencies got involved promoting the effort with blog posts and web pages, including:

Each of the agencies and departments echoed the White House talking points, sometimes copying and pasting the points -- just as the Promise Zone Initiative copies and pastes the same, tired governmental solutions.

HUD says, "A child’s zip (sic) code should never determine her destiny," but the Promise Zone is another attempt to let ZIP code determine destiny.

In a free society, people who want to advance their lot in life can change their location -- in search of work or simply of a better neighborhood in which to raise their children.

The benefits bestowed upon residents in the Promise Zone don't follow them if they move away. The programs give incentives to stay put, and not to advance.

At OMB, they get into the act, too, giving a long list of leftist agenda items, such as access to early childhood education, a minimum wage increase, and so on. Each of the items careens into a difficult problem: none of these initiatives has ever been shown to improve economic conditions.

Targeting certain communities with solutions that don't work will not have the effect the backers of Promise Zones desire. At most the benefits will be superficial, with a coat of paint for a community center or flower plantings along the same gray avenues devoid of the bustle of commerce.

Instead of Promise Zones, the nation needs not the addition of government programs, but their subtraction. Free the people from the rules choking the economic life from the country, stand back, and watch America roar to life again.

Congress may be away from Washington, but FreedomWorks isn't resting. Our hardworking team has used the legislative recess to their advantage, hosting several grassroots events around the country, including another stop on the Constitution Revival Tour in Sacramento, playing a major role in the RedState Gathering in Denver, and hosting our third super activist boot camp of the year in Chicago.

The Biggest Beneficiary from Zero-Rating: The Developing World

There’s no denying it: we live in a world dominated by technology and the internet. We have witnessed the growth of massive tech companies and have seen how these new industry giants, once thought impossible to exist, drive entire economies to grow. For many people around the world, these innovations may be the difference between upward mobility and abysmal poverty. Despite the importance of expanding the reach of the internet, governments around the world have been pursuing policies that may stifle these amazing developments.

Following the release of a report that showed an anemic 0.7 percent economic growth in the fourth quarter of 2015, FreedomWorks Senior Economic Contributor Stephen Moore commented: