The Continuing Resolution and Sequestration

Despite every attempt by congressional Republican leaders to preemptively surrender, the fight to get a sane Continuing Resolution (CR) to fund only the necessary parts of government is not over. Senate Democrats and the White House, not content with victory, are pushing for even more spending and taxes, giving reformers an opportunity.

The CR was billed as cementing in place the reductions in the rate of increase in government spending that came from sequestration. At the heart of the problem is that both parties in DC don't believe there is a crisis. The CR funds the agencies implementing Obamcare, and continues spending levels where the panicked Keynesians put them in 2009.

The House should vote down the CR when it comes from conference.

The press release from the House Committee on Appropriations announced, "Chairman Rogers Introduces Continuing Resolution to Prevent Government Shutdown, Protect National Defense and Veterans." The CR is to "help maintain our national security, and take a potential shutdown off the table",  conceding that a shutdown is not just a danger to be avoided, but is not going to happen.

This government needs to be shut down for a few days, weeks, or months, to show the politicians in DC that it really isn't all that important to ordinary Americans. 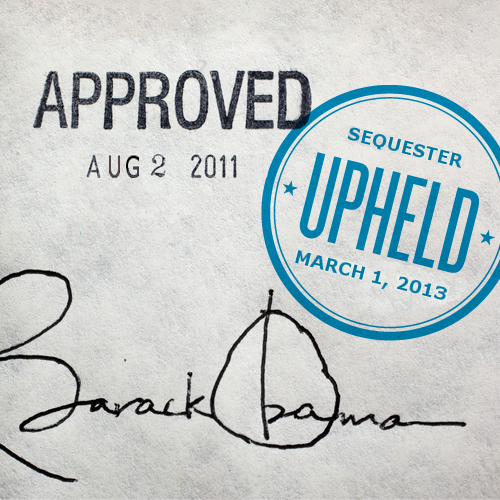 The president, for his part, continues to maintain that an end to sequestration, another tax increase, and more government spending is the right path. He ridiculed "severe conservatives" seeking to repeal or defund Obamacare, which he sees as settled law. Sequestration is also settled law.

Shimkus asked the crowd if any of them had noticed any effects from sequestration. There was no reply. Many in the crowd appeared not to know what he was talking about.

Shimkus described sequestration as inconsequential. "Wasn’t it a shame to have the President running all over the place saying the sky is going to fall. Now you have an understanding of the challenge we have in Washington. Our budget is $3.6 trillion. I can’t even think that big. And we’re fighting over 85 billion? It’d be like 25 cents on $100,000. That’s the perspective. So now you can see it’s tough it is to have this fight but I’m glad we’re doing it."

This CR will continue to institutionalize the nation’s out-of-control deficits, allowing for over $1.1 trillion in spending through the end of fiscal year 2013. Also, the addition of a number of appropriations bills to the CR, including for the departments of Defense, Commerce, Justice, Homeland Security, and Agriculture, prevents each of those appropriations from being debated and amended individually as ought to be the case, essentially turning this bill into an omnibus spending bill.

Rather than allow the fight to defund the unpopular and disastrous Obamacare, House leadership included funding for the agencies that are implementing it and forced a closed rule for the CR, failing even to include a rider emphasizing that a federal health insurance exchange has never been funded.

And so it will be, until congressional Minority leadership shows its willingness to leverage its opportunities.

What would you have them do?" comes the refrain. "They only control the House, and they have to work with the Senate and President."

Yes, yes, of course. But without a vote from the House of Representatives, the government cannot function. The Continuing Resolution could have been, and could still be, offered up without funding for Obamacare and a host of other unnecessary programs, such as the entire Departments of Education, Energy, and Labor; the Federal Communications Commission, the National Labor Relations Board.

They should come to the bargaining table with the moon in hand, and be willing to bargain to get only what they really want.  Until then, we will always keep bouncing from one crisis to the next, never sure whose side our representatives are on.