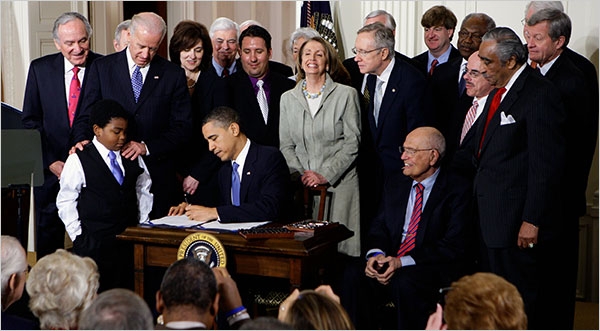 Writing at Fox News, for instance, Peter Morici lays out the case for accepting Obamacare and trying to change it.

Republicans should stop cheering for ObamaCare to fail. It may be dreadful, but going back to what we had before is not possible. The real political hay is to be made improving the law to lower prices and premiums -- details Democrats forgot.

The political and policy ramifications of Obamacare are related, but Republicans do not oppose Obamacare simply on political grounds. Making "political hay" is secondary to preserving the liberty and economic well-being of Americans and avoiding out of control federal health spending.

The wheels have come off Obamacare. Even the website will not be ready by December 1; two months after it was launched. On the political level, why would Republicans accept the failed Obamacare now, as Democrats scurry away, and when the reality of government delivery is daily making stronger the arguments for its full repeal?

There would indeed be a huge political cost to the bait-and-switch of accepting and trying to improve Obamacare. The real schism in the Republican coalition between grassroots idealists and the establishment plotters would grow even deeper. It is exactly the wrong thing to do.

The other problem with accepting and trying to fix Obamacare is on the policy level. Obamacare cannot be fixed. It is built on a broken foundation - price controls and the third-party-payer model. No amount of scheming, plotting, or tweaking can make it right.

Why Obamacare Was Fundamentally Broken

In the effort to mimick the effects of the free market, Obamacare designers used the exchange model that had been developed at the Heritage Foundation in the 1990s in response to Hillary Clinton's total government takeover. Calling that a "conservative" plan is ridiculous, however, since it was merely designed to be less radical than HillaryCare.

Obamacare's designers then larded up the exchanges with some emotionally attractive but economically disastrous provisions:

The actuaries in government and the insurance industry crunched the numbers and said that even with the subsidies, there was no way people would buy the Obamacare insurance policies. The whole thing had to be made mandatory.

That's a simplification of the program.

Few pieces can be removed before the Tinker Toy model falls the rest of the way apart.

What Obamacare Opponents Should Do

It is a false choice between accepting Obamacare and going back to the pre-Obamacare system, which was already overregulated. As much as I dislike the weak slogan "Repeal and Replace," that is what needs to happen. Obamacare should be fully repealed, and -- after careful study and debate -- gradual, consensus reforms introduced to undo the damage governmental involvement has caused to date.

During this reform process, there's no doubt the left will try to add more and more government control to the health care system, because they believe government control makes everything better. We will be far better off both politically, and in national policy starting over than trying to rebuild the sandcastle while the tide comes in.

Legislative and activist pressure is needed therefore to dismantle the law piece by piece, attacking the least popular parts of this unpopular program. Rather than accepting Obamacare, which is both bad policy and bad politics, we must continue to attack it until it can be fully repealed.

Democrats will resist any changes to Obamacare, because they know that without any one of the major components, the implosion will be all the more apparent.

Calls as Morici's for us to give up freedom in the name of containing health care costs should ring hollow for every American, particularly those claiming to speak for limited government. Because even if a top-down governmental system of price controls and managed care could control costs, and even if it could provide better care, it would make us less free in a fundamental way. That's not a fair tradeoff.

Republicans should avoid such nonsense, and continue attacking Obamacare.

Every Senate Democrat in office in 2010 was the deciding vote for Obamacare.

Without the vote of any one of the Senate Democrats, Obamacare would not have become law. They voted unanimously in support of the rule that forced insurance companies to cancel policies.

As it stands, Democrats are responsible for Obamacare -- all of it -- its rules, its cost, and every page of regulation. Without them, it would not exist.

Continue efforts to repeal this awful law, and make those responsible for it pay politically for what they have done.

Even Bill Clinton supports allowing you to keep your health insurance plan if you like it! http://thehill.com/blogs/healthwatch/health-reform-implementation/189937...

In my opinion, based on my study and fighting with Fabian Socialist and Communist for the past 63 years, all these problems with Obama Care are deliberate, and designed to achieve their socialist objective they don't give a damn who they hurt so long as the objective is achieved. The objective of socialism is to destroy capitalism, private ownership, using the financing of socialist capitalist; what Karl Marx called Bourgeois Socialism, capitalist that want to be an intrinsic part of the hierarchy of the socialist oligarchy- the ruling class. Capitalist don't want to become ditch diggers. They become traitors of capitalism and become socialist to become richer than they already are by ruling the world. Having control over all the money of the world. The purpose of Obama Care is to destroy all the health insurance companies in America. The socialist oligarchy will then become the only health insurance agency, possibly administered by Progressive Insurance. The working class will then have deduced from their wages a predetermined amount of money to support Obama Care, just like Social Security. This will ultimately bankrupt the country, and gone will be individual freedom our Forefathers fought for.

Even if Obamacare is on its way into the pantheon of incremental socialist programs like Medicaid, Medicare, Social Security, food stamps, and farm subsidies, this is not a program any freedom-loving American can approve. And "it really doesn't matter if Obamacare can work and is what the country needs and wants" is how Obamacare got passed in the first place. It does matter. It will always matter.

It would have been an even starker contrast if more GOP senators including the Senate GOP "leadership" team of McConnell, Cornyn and Alexander had stood shoulder to shoulder with Cruz and Lee! On one hand, these three claim to oppose Obamacare. On the other, they say 'what can I do' and blame all their woes on those who stand up and fight! The Senate GOP needs to stand should to shoulder and take advantage of each and every opportunity to chip away at Obamacare!