For most of this year, the talk in Washington has been focused on the debt, the debt ceiling, spending, and tax revenue. Politicians, economists, reporters, and citizens keeps referencing these large unfathomable numbers, like $14.6 trillion in debt. But what does that really mean?

How can the average American citizen relate?

Instead of looking at $14.6 trillion, a number which is almost as hard to comprehend as the concept of infinity, we can look to see how the debt would relate to the average American family's income of $50,000 a year.

Our current fiscal situation is comparable to the scenario below:

Without taking into account debt you have already accrued, it is clear that the above situation is unsustainable. You will have to change your habits significantly, if you are going pay off the $32,000. Unfortunately, $32,000 is not all you owe. Over the past years, you have not been fiscally responsible and you have racked up a total debt of $331,800, much more than you make in a year.

$331,800 is quite a looming debt for someone who makes $50,000 a year. If you continue down this path, and keep spending at the same level, at a higher level, or any level above the amount you make, you will soon be in a situation where you cannot possibly pay back your debts. You will default and go bankrupt.

However, there are two ways that this problem could possibly be solved. 1) You somehow find a way to greatly increase your income, or 2) you significantly cut spending.

While it would be incredibly convenient to be able to increase your income to meet your spending desires, in the real word this option is not very realistic. [In the United States, even though income tax rates have ranged from 94% to 25% for top income earners, historically, government revenues still stay around 18% of GDP.] 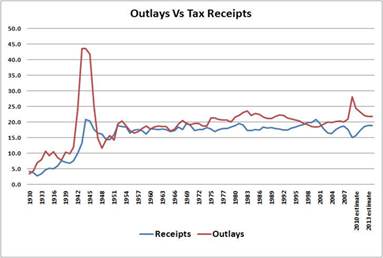 The only solution to your debt problem, which is currently leading you toward a colossal crisis, is to cut spending considerably. The only question that remains is: How aggressively will you do it?

You cannot get out of your massive hole and solve your problem by increasing your spending, just at a slower rate, like Washington suggests. [See Cato Institutes' graph below.] 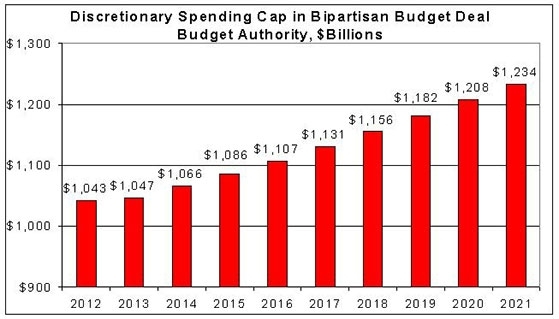 As if your situation wasn't bad enough, you also have a whole bunch of unfunded liabilities you are expected to pay in the future. What exactly does that mean? It means you have a habit of handing out large IOUs to people and have been doing this for years. Unfortunately, the first large wave of these IOUs is coming due, and you do not have the money to pay for a considerable number of them. The current amount of unfunded liabilities you have is $2,611,363 and this number is growing every day. Your future spending is projected to increase exponentially as a result. 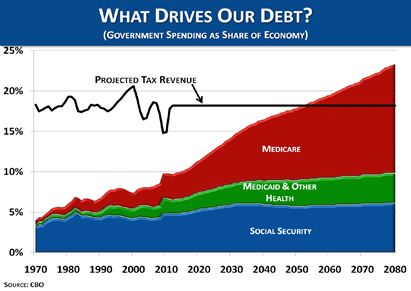 You are in a very difficult situation. You unrealistically made promises; promises you have no way of keeping because you never had enough funds to fulfill them. So what do you do?

We need to change Washington.

Call your Senators and Representative and let them know you will not stand for business as usual; We need spending reform now.

In case you missed it elsewhere, I've posted one of author/financial expert David Latko's op-ed articles on my blogsite ( http://www.redroom.com/blo​g/earl-merkel/big-trouble-​and-tough-love ) It's both humorous and insightful, and you may enjoy it. Here's hoping it also lets more people know about Latko's new book "2019: Dystopia USA - A Novel Of America's Economic Twilight".

We agree! If the entrenched representatives, both Republican and Democrat, refuse to acknowledge the fact that their deficit spending has to stop, we have no choice but to vote them out before they destroy us! We can never even start to reduce the debt without eliminating the deficits first. See http://howardwemple.com
Common Sense from the Heartland