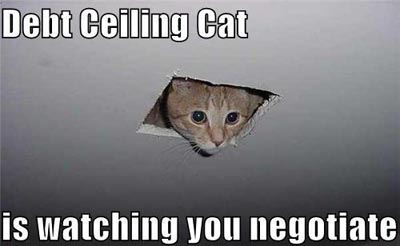 We need to address the debt problem right meow!

Every time the debt limit is reached, Democrats take to the airwaves to howl about how it’s treasonous to even discuss whether or not it’s a good idea to raise it again. If we don’t lift it, and fast, they say, the U.S. will default on its loans, resulting in financial catastrophe the likes of which we’ve never seen.

Of course, none of this is true, but the mainstream media has never let that get in the way of a good doomsday story before. What actually happens when the debt ceiling is reached is actually a lot more complicated than simple fire and brimstone.

The Office of Management and Budget estimates that tax receipts for 2015 will total about $3.2 trillion. Estimated spending is about $3.8 trillion, meaning that we have to borrow about $600 billion to pay for everything. This is the budget deficit.

The thing is, tax receipts continue to come in throughout the year; failing to raise the debt ceiling has no effect on that. And, to a certain extent, the Treasury can decide which of that money is spent first, prioritizing the most crucial payments. For example, interest payments on the debt - what keeps us from defaulting - would obviously come first. That equals about $230 billion for 2015. Next comes national defense, about $600 billion. Then you have Social Security, Medicare, and income security, all the stuff that the White House threatens to take away when they want to scare people about the need for more debt. That totals about $1.9 trillion.

In other words, the government has enough income to pay for debt interest, national defense, Social Security, Medicare, and income security without have to borrow a dime. So what kind of things won’t we be able to pay for? Mostly things no one will notice while debt negotiations take place. Scientific research, the federal Departments of Education, Energy, and Commerce. These are hardly crucial programs that can’t be put on hold while we figure out some necessary spending reforms. These programs will still receive funding; they’ll just have to wait a little while until the money is available. The important point is that the highest priorities - paying our debts, keeping us safe, and fulfilling our Social Security obligations - will be in no danger.

Meanwhile, the need to actually address our nation’s spending problem is growing ever more urgent. Within ten years, interest on the debt alone will exceed national defense spending, and that’s with interest rates at historically low levels. If they rise, we will quickly find the entire federal budget consumed by debt service. The time o address this is now, we can’t afford to wait any longer. And we shouldn’t let misinformed fears about the current debt limit stop us from having that conversation.