If Elizabeth Warren is So Anti-Wall Street, Why Does She Support the Ex-Im Bank? 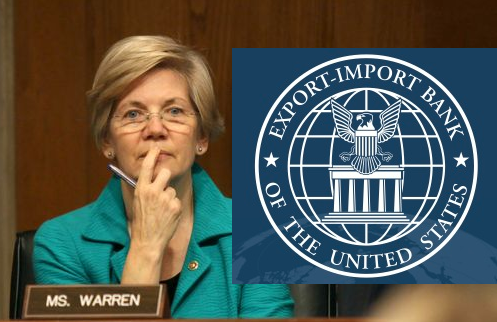 Senator Elizabeth Warren (D-Mass.) has a populist reputation of being anti-Wall Street. Last week, she nearly threatened to shut down the government because the Omnibus bill would repeal a section in the Dodd-Frank financial regulation bill that passed in 2010.

She gave a passionate speech on the Senate floor calling for her colleagues to oppose the government spending bill unless the provision was removed.

And yet here we are, five years after Dodd-Frank with Congress on the verge of ramming through a provision that would do nothing for the middle class, do nothing for community banks, do nothing but raise the risk that taxpayers will have to bail out the biggest banks once again...

She’s right to say that opposing Wall Street bailout is a transpartisan issue.

FreedomWorks strongly opposed the $700 billion TARP bailout during the Bush administration. We stayed true to principle. Because we, in no way, believe that it’s okay for the government to give taxpayer dollars to big banks and corporations that made bad decisions.

One can say that the Tea Party movement gained momentum after the big Wall Street bailouts. Many people in the Occupy movement also took issue with the big bankers getting bailed out by Main Street. Elizabeth Warren has even taking credit for “creating much of the intellectual foundation for what they [occupiers] do.”

However, the Tea Party and Occupy movements often disagreed with each other on the right tactics and solutions.

As a libertarian, I’m more likely to agree with the Tea Partiers who believe that big government and big business go hand and hand. You want to reduce corporate welfare and handouts? Then, reduce the size and scope of government.

I tend to disagree with Elizabeth Warren’s approach. It’s too big government for my tastes. If politicians are in bed with big corporations, I sense that giving government more power will only escalate the problem.

However, I’m able to recognize we have the same end goal—no more taxpayer-funded bailouts—even though our proposed solutions are different.

Though, I have to question: just how anti-Wall Street is Elizabeth Warren, actually?

For someone who constantly rails against corporate handouts, it’s surprising to learn that she’s a supporter of the Ex-Im Bank.

A spokesperson for Elizabeth Warren told Bloomberg News in an email:

Senator Warren believes that the Export-Import Bank helps create American jobs and spur economic growth, but recognizes that there is room for improvement in the bank’s operations. She looks forward to reviewing re-authorization legislation if and when it is introduced.

FreedomWorks opposes the Ex-Im Bank because it loans out taxpayer money to big politically-connected corporations and banks.

It’s not just groups on the right who are opposed.

Ralph Nader has said that the left and right must come together to end the Ex-Im Bank.

She even said, "The American people didn't elect us to stand up for CitiGroup” during the recent Omnibus debate.

True. But this is odd since Citigroup is one of the greatest benefactors of the Ex-Im Bank.

Where is Elizabeth Warren standing up against corporate welfare when you need her?

Elizabeth Warren has a lot of reasons to support certain kinds of funding and not others. It's the Obamacrat program of funding supporters and punishing opponents with state resources. When conservatives first caught wind of Choke Point, they saw it as an attack on gun rights. Led by Sen. Randall H. “Rand” Paul (R.-Ky.), conservatives, through appropriations language, are working to give the firearms sanctuary.

Now there is the matter of other legal businesses on the list. Legal products or services on the list include coin dealers, online dating sites, tobacco and pay day lenders.

Pay day lenders are especially interesting, because they are in direct competition with credit unions, who have long lobbied to outlaw their competitors, and liberal activists that use the micro-lending business to build its political organization.

The best example is the Center for Responsible Lending, an associated advocacy entity owned by North Carolina-based credit union Self Help. Self Help is run by its founder Martin Eakes, who has the same stature in liberal circles as Sen. Elizabeth Warren (D.-Mass.) for his progressive ideas and advocacy. Both CRL and Self Help purport to advocate for the poor, but are in fact tax-protected and tax-financed agents provocateurs for the liberal agenda.

In fact, when Choke Point broke through into the mainstream media, CLR signed a liberal coalition letter defending the program and calling on the Obama administration to double-down on shutting down pay day lenders

It is hard to understate how active CRL and Self Help have been on Capitol Hill and inside federal offices pressing the liberal agenda. They have spent more than $5.2 million on Washington lobbyists including paying a former congressman and the wife of a Congressman to lobby, since 2006, according to paperwork filed with the Clerk of the House of the Representatives.

This financial swag is expensive, but not beyond the means of CRL and Self Help. While CRL reports assets of $1.5 billion, it has received $12 million in stimulus funds from the federal government.

Another one of Self Help’s subordinate entities, Self Help Ventures, receives zero-interest loans from the Small Business Administration, which it then micro-loans out those funds at interest rates as high as 4.5 percent.

Self Help Ventures has made more than $200 million in profits since 1997, turning over $468 million in revenues for a profit margin of roughly 40 percent, if the entity was taxed as its competitors.

Operation Choke Point was exposed because it was hijacked by the Obama Administration to go after gun owners and the firearms industry.

Now, Capitol Hill conservatives are awakening to Choke Point’s larger role, not just picking winners and losers in the marketplace, but attacking competitors to the Center for Responsible Lending, an ACORN-like financial organization. The CRL builds its relationships in economically-distressed communities, collecting favors and distributing favors, collecting federal grants and loans and distributing grants and loans—as well as political contributions and hefty lobbying fees.

Elizabeth Warren doesn't really stand for anything - Liberals (and I include the Republican Establishment here) only stand for themselves. We must understand what we're dealing with here... http://www.investingforprosperity.com/elizabeth-warren.html

http://againstausterity.org/exim I am no fan of Warren but to be clear the ExIm bank returns 1/2 a billion to the treasury each year and productive business uses it. China has 4 ExIm's and is laughing at us attacking our own last one. Please let's stop spinning our wheels and go after Wall Street SPECULATION. The ExIm is there for productive American Industry!