Inflation a Worry but Can Be Hedged Against 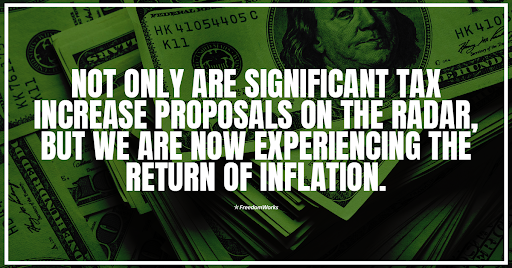 A penny saved is a penny earned. — Benjamin Franklin

We may now be facing a worrisome variation on Franklin's observation.

Not only are significant tax increase proposals on the radar, but we are now experiencing the return of inflation.

That means that not a penny, but a dollar, today will not buy the same value of goods and services tomorrow and certainly not in 10 years time.

While we are reassured by Fed chair Jerome Powell that the current price increases we are witnessing are "transitory" many of us — as consumers and in business — are sensing that a more costly future lies ahead of us.

When the COVID-19 pandemic began, there was an extraordinary increase in money supply (M2) during March of 2020, with annualized growth accelerating to 23.9% — the fastest rate since World War II.

With all of this money circulating amidst increasing consumer demand, it's possible that inflation rates may top 6% or even as high as 9% by year end.

In June, the consumer price index (CPI) increased to 5.4% — the largest 12 month increase since August 2008 — although the media forecast among Federal Reserve officials was 3%. The Producer Price Index has escalated to 7.3% over the last year. At this pace, over the next 10 or 15 years, the value of the dollar would be cut by half.

Sadly, the poor and middle-class are impacted most when inflation surges because prices rise faster than income. As the dollar’s purchasing power is decreased among a growing population, people buy less goods and economic growth can stagnate.

Therefore, it's critical to find the right strategies and investments for your savings to hedge against inflation.

High quality stocks offer the most capital appreciation potential in the long term.

The S&P 500 has a high concentration of fast moving technology businesses and communication services. (They account for a 35% stake in the Index.)

Both technology and communication services are capital-light businesses, so, theoretically, they should be inflation winners.

To illustrate how equities have been among the best hedges against inflation, let us share one famous case. On Dec. 12, 1980, Apple Inc. (AAPL) went public at $22 a share. Say, you bought one share at the end of the day at $28.

Now let’s assume you had stashed that $28 in a cookie jar for 40 years instead.

The face value wouldn't have changed when you retrieved those dollars, but the purchasing power would have eroded to $10.00 in 1980 terms; that represents an approximately 65% depreciation. Of course, not every stock can possibly have performed as well as Apple.

You would have been better off safeguarding that cash in 1980 rather than buying and holding a share of Worldcom which went bankrupt in 2002.

Other investments worth examining now include gold, commodities, real estate income which can become valuable during periods of escalating inflation. But remember that these assets are also volatile and may be better for patient, long term holders.

Bonds suffer loss of principal during rising rates of inflation because their coupon rate is fixed. If you are holding $50,000 in a 30 year treasury bond paying 1.5% interest and inflation is 3.5% (a conservative estimate), you are losing 2% a year which in this example equals $1,000 for each year that this negative spread exists.

This so-called safe investment has major drawbacks during inflationary times and could require you hold the bond to maturity to recover your entire principal investment.

If you are needing liquidity, you are better off in cash during these uncertain periods.

In the end, these escalating inflation worries may be the perfect recipe for exposing the disastrous progressive governance agenda.

As people observe one multi trillion spending bill after another in addition to the massive monetary stimulus, it might eventually expose the reality of the government spinning out of control.