No Debt Ceiling Hike Without a Balanced Budget Amendment!

The bipartisan debt ceiling talks are likely to produce a bad deal. 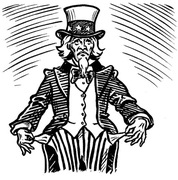 That would be a bad deal. The spenders would get their desperately desired debt ceiling hike, but taxpayers won't actually receive the promised spending cuts.

Below is an opinion article by Mr. Clancy on this topic published by FoxNews.com on June 16, 2011:

In Debt Ceiling Debate, Republicans In Congress Should Not Cut a Deal Without a Balanced Budget Amendment

Uncle Sam's credit card is maxed out. On May 16, the United States will officially hit its $14.3 trillion statutory debt limit. President Obama is demanding an increase in that limit, warning that failure to raise the debt ceiling by August 2 will cause the U.S. to default on its debts and trigger an economic “Armageddon.”

Unfortunately, the bipartisan summit talks currently taking place at the White House are likely to produce a bad deal.

Washington is rife with rumors of an agreement being hammered out by six top congressional leaders and Vice President Joe Biden, entailing roughly $2.5 trillion in promised spending cuts that are to materialize or accrue in future decades in exchange for a $2.5 trillion increase in the government’s credit limit.

That would be a bad deal, because it would not include include a Balanced Budget Amendment that would bind future Congresses. The spending reductions could be easily undone, after the next election, in fact. It also means we would be passing up the chance to reduce current-year spending, repeal the president’s costly, job-killing health care law, or save Social Security, Medicare, and Medicaid by giving recipients more choice and control.

We’ve seen this movie before. Bipartisan summits in 1983, 1990, and 1997 all proved ultimately unfriendly for taxpayers but were great for the Washington spending class. Taxes went up; the promised spending cuts never materialized or were later reversed. Even the $39 billion budget deal of two months ago -- touted as “the largest one-year cut in history” -- turned out to reduce current-year spending almost not at all.

In light of this history, fiscal conservatives and Tea Party supporters are right to be wary. Another such phony deal now -- when the country is sliding headlong into a Greek-style debt crisis -- would rattle global bond markets, harm our economy, and set off a political explosion.

“Tomorrow” is finally here. We can no longer afford to postpone the tough choices. The federal government is borrowing 40 cents of every dollar it spends. Decades of excessive government spending and deficits, under both political parties, have piled a mountain of debt on our children. Indeed, that debt has doubled in just the past five years, and is now growing at the rate of $120 billion a month, $1.6 trillion a year.

We are going to cut spending, one way or another. Either we do it now, voluntarily, or global bond investors will force us to do it later, in a crisis atmosphere. International credit rating agencies like Moody’s and Standard & Poor’s have warned, correctly, that they will be forced to downgrade our debt, and raise our interest costs, if we don’t get our fiscal house in order soon. Agencies in China and Germany have already downgraded U.S. debt. To avert national bankruptcy, America must bring her incredible spending binge to a halt.

The only kind of reform taxpayers can really trust is one that includes real spending cuts, binding spending controls with teeth, and a Balanced Budget Amendment. Cut, cap, and balance. All three elements depend on each other. All are necessary in any debt-hike deal.

Congressional Republicans may object that a good Balanced Budget Amendment aka a BBA -- one that includes a super-majority requirement for any tax hike -- cannot pass. But why not? Three in five Americans support a BBA, and most Americans hate tax hikes. A tax-limiting BBA is both good policy and good politics.

But what of the President’s August 2nd deadline? Won’t failure to raise the debt limit by then trigger a default “Armageddon”? Just the opposite. The real crisis will ensue if Washington fails to use this historic opportunity to get spending under control.

Default is a red herring, anyway. The IRS collects more than enough money to pay our creditors indefinitely. True, failing to raise the debt limit may force the Treasury to temporarily postpone government contractor payments or Social Security checks. That would certainly create a political problem for politicians. But it wouldn’t be a default.

This budget crisis is different. The stakes are higher. And so is the GOP’s leverage. Recent FreedomWorks’ polling, conducted by Luntz Global, finds that 7 in 10 Americans in key swing states strongly oppose any debt ceiling increase. Period. Fifty-four percent still oppose it, even if paired with “very significant” savings and tough restrictions on future spending.

Do Congressional Republicans really think a president running for reelection in a weak economy won’t blink? They are in an enviable position to extract historic reforms from him, and thus save our country.

Beware the “deal.” Hold out for cut, cap, and balance.