It appears President Obama's strategy in the debt ceiling talks has been to do 4 things:

Until two days ago, his strategy was working.

Republicans had already given up on serious entitlement reforms (meaning reforms that increase seniors' freedom and control over their own retirement) and were beginning to show some ankle on tax "loophole closers."

But then the President upped the ante by demanding tax rate hikes.

This was a bizarre turn for a President who had been demanding a "clean" debt ceiling bill -- unless, of course, the President was simply playing to his electoral base.

At any rate, for our viewers at home, here's a quick recap of the Great Debt Ceiling Debate so far:

1. Washington currently borrows 43 cents of every dollar it spends. The national debt is rising by a staggering $200 million an hour.

2. The debt ceiling -- the law that prohibits the President from borrowing more than a certain amount to pay the bills and debts of the United State -- is currently set at $14.3 trillion.

4. Unable to borrow further from the bond markets, President Obama began borrowing from various US Government trust funds (which he will have to pay back later), and demanded that Congress send him a "clean" debt-ceiling increase bill by August 2nd, or else the result would be a default (i.e., a first-ever postponement of payments to our creditors) followed by economic "Armageddon."

5. Republicans in Congress rejected this demand.  They could do the math and see that default wasn't a necessary outcome.  The President could just delay payments to government contractors and the like while an agreement was worked out to cut spending.

6. To underscore their resolve, the Republicans put a "clean" debt ceiling increase bill to a vote in the House, and it was soundly rejected.

7. President Obama agreed to discuss some spending cuts, but also demanded a series of targeted tax hikes (closing "loopholes" on corporate jets and the like).

8. Republicans rejected the tax hikes, but suggested a willingness to accept tax REFORM, in which they would agree to close loopholes in exchange for lower tax RATES.

9. On July 9th, President Obama rejected the idea of reducing tax rates. (Recall the the 35 percent top tax rate is scheduled to go up to 39.6 percent on January 1, 2013. Congress will have to pass a tax bill to keep it from doing so.)  He did this, incidentally, on the same day that the official unemployment rate jumped up to 9.2 percent.

10. Republicans publicly walked away from the idea of tax loophole closers.

That was two days ago. Today, the astute James Pethokoukis at Reuters.com gives a nice summation of Mr. Obama's seemingly bizarre negotiating strategy:

[He] could have done two things that might have saved his Mother of All Budget Deals.

First, he could have embraced market-centered, consumer-focused reforms to Medicare. That was about as likely as him accepting an Obamacare rollback.

Second, he could have agreed — as House Speaker John Boehner and Republicans suggested —  to sharply reduce tax rates in return for fewer special tax deductions/breaks/loopholes/subsidies. Recall that is what his own debt commission recommended.

Instead, he apparently offered to keep top individual rates where they are, at 35 percent, in exchange for tax reform. Now that’s a big tax hike. But it’s also revealing.

Indeed.  It reveals that Mr. Obama is a dyed-in-the-wool class warrior and tax-lover ... and seemingly also a lousy negotiator.

Or a cynical one? The President's behavior in these talks is not inconsistent with the 2nd of  those 3 goals I mentioned -- neutering the GOP on taxes.  (Even if it means higher unemployment.)

But whatever is in the man's heart and mind, we at FreedomWorks think the congressional Republicans have conceded too much to him already.

There should be NO tax hikes.

There should also be NO debt ceiling increase without REAL spending cuts and reforms, including a Balanced Budget Amendment.

Only profound changes to the way Washington works can ensure that this is the last debt-ceiling hike ever. 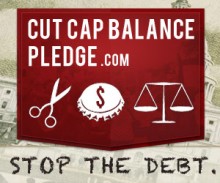 Do you agree? If so, please help us.

Let's send a message to the DC spenders, and especially the Tax Raiser in Chief: "No debt ceiling hike without 'cut, cap & balance'!"