Politicians typically break campaign promises more often than not. When an elected official instead chooses to keep their word, he or she deserves recognition for their consistency. With the rise of the Tea Party movement, many lawmakers are talking about cutting government spending. Few politicians, however, are willing to truly walk their talk. Some of those exceptions include new senators such as Sen. Rand Paul (R-KY) and Sen. Mike Lee (R-UT).

Last week, Sen. Paul along with Senators Lee and DeMint released a plan that would balance the federal budget within five years. It would do so by eliminating entire departments and not increasing taxes by one cent. By the year 2016, we would have a $19 billion surplus. The Cato Institute has posted helpful charts to show the difference between Rand Paul and President Obama’s budget. 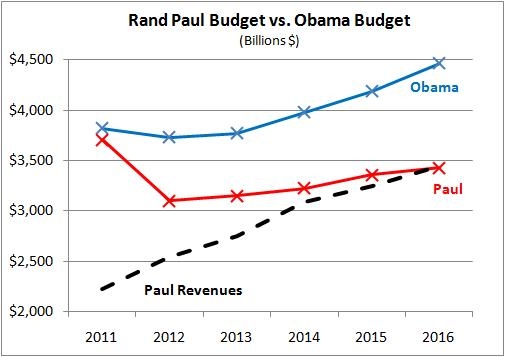 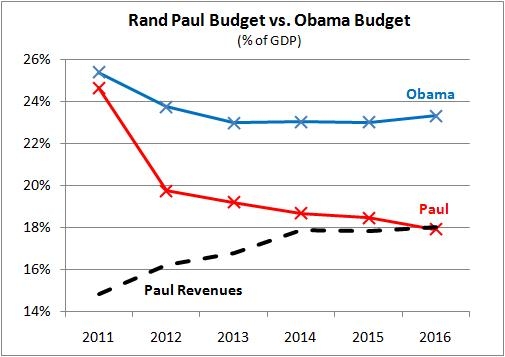 The plan has gained traction among true limited government types. Campaign for Liberty has listed some of the main highlights of the balanced budget proposal:

- Reduces spending by nearly $4 trillion relative to the President's budget

- Brings all non-military discretionary spending back to FY2008 levels

- Requires the process of entitlement reform, including Social Security and Medicare, with final implementation by FY2016

- Does not change Social Security or Medicare benefits

- Department of Housing and Urban Development

It is refreshing to see that Rand Paul’s balanced budget proposal cuts spending in all areas of government including the defense budget. Taxpayers lose if certain parts of the budget are isolated from serious scrutiny. The military budget has nearly doubled over the last ten years. It isn’t reasonable to believe that the Department of Defense (DOD) has spent every dime in the most efficient manner. We agree with Defense Secretary Robert Gates that “it is imperative for this department to eliminate wasteful, excessive and unneeded spending.”

We applaud Rand Paul for staying true to his word. In addition, Sen. Lee has proposed a balanced budget amendment to the Constitution to limit spending to 18 percent of Gross Domestic Product (GDP) and require that any effort to raise taxes would need a two-thirds majority vote in both chambers. As it currently stands, government spending consumes approximately 25 percent of our GDP.

These are both modest proposals to rein in federal spending. With our current national deficit at $1.7 trillion, it is radical to continue spending at unprecedented levels. It’s time to determine who is truly serious about cutting government spending. Call your senator and tell him or her to restrain the federal government by supporting Rand Paul and Mike Lee’s balanced budget proposals today.