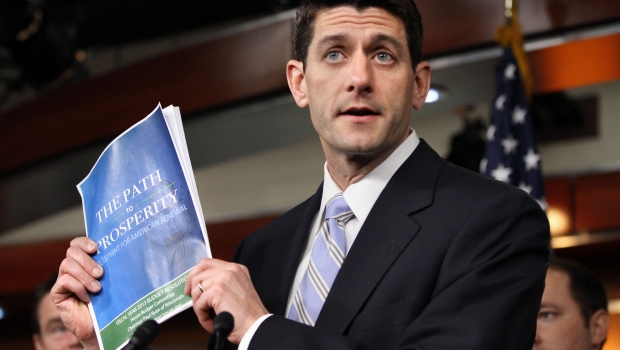 The House GOP budget proposal for the coming decade (2013-2022), released yesterday, is a mixture of boldness and caution, principle and compromise.

Resembling and building on last year's House-passed "Ryan budget," the Path to Prosperity version 2.0 reads very much like a preview of a Romney Administration budget version 1.0.

While not nearly as bold and principled as these debt-drenched times require, it would still be a major improvement over the status quo, and much better than what President Obama and congressional Democrats envision, namely, ever-bigger government.

Paul Ryan is the GOP's most popular politician, and for a good reason. He is serious, principled, and conservative, without being dour or threatening. Disciplined, articulate, focused, optimistic -- he's got the whole package. And unlike most politicians, he actually knows his stuff. This is what leadership is made of.

Unfortunately, Mr. Ryan can only lead the GOP herd where it really wants to go, as fast it wants to get there. He must trim, to keep his caucus together. And this -- a boldness, tempered with caution, even excessive caution -- is stamped all over this latest version of his "roadmap" plan.

First, it repeals ObamaCare in its entirety.

Second, it correctly identifies and tackles the biggest source of our current fiscal mess: out-of-control health care spending. Thus its proposed reforms of Medicare (through a premium support, managed competition plan) and Medicaid (a block grant to the states), while imperfect in some details, are essential and welcome.

Third, it tries to stop the growth of the government as a share of the economy through tight spending caps enforced by automatic cuts or sequesters.

Fourth, it includes a major tax simplification -- a modified Flat Tax. A host of (unspecified) tax-code loopholes would be ended, and today's six tax brackets and 35.6% top rate would be replaced by just two brackets: 10% and 25%. This structure would force Congress to eliminate basically all existing tax loopholes, including the popular health-care, mortgage interest, and charitable contributions breaks. And thanks to the highly "progressive" nature of today's code, this change would basically raise the tax burden on millions of lower-income and middle-income Americans.  And yet the plan is still very encouraging, because, if it did materialize, it would be a major step toward fairness and a tremendous spur to economic growth.

Overall, under the plan outlays over the next decade would be "only" $40 trillion, compared to the $43 trillion projected to be spent under current law and the $45 trillion proposed in President Obama's FY 2013 budget plan.

Even better, Ryan claims government spending will, for the first time in our lives, actually go down from one year to the next, with total outlays in 2013 being $124 billion lower than in 2012. This is important, because in any multi-year budget plan, it's only the spending cuts (and reforms) you enact in the first year that really count. Everything in the "out years" is really just promises.

Ryan estimates his plan would slow the growth of the publicly held portion of the national debt, so that it would shrink as a share of the economy from its current level, equal to roughly 70% of GDP, down to a more manageable 62%, over 10 years. Obama's budget, by contrast, would increase the publicly held debt to 76% of GDP.

That's all to the good.

Unfortunately, the plan doesn't really try to balance the budget or specify a single cabinet agency for elimination. For the tea party grassroots, that takes a lot of the political wind out of its sails.

And Ryan has decided once again to rely exclusively on the official, "respectable" estimates of the Congressional Budget Office and Joint Committee on Taxation, which tend to be biased against tax cuts and economic growth and in favor of health care mandates.

Now for the bad parts.

Like last year's Ryan budget, the new version takes Social Security and defense off the spending-cut table. These two programs together equal 40 percent of the budget. In fact, Ryan would actually increase defense spending, relative to current law, though he'd cut entitlement spending modestly in 2013 in order to make room for the additional military spending.

Ryan's budget also tests the theory that Congress can voluntarily live under its own self-imposed spending caps. House Republicans assured us last summer that, in exchange for giving the Democrats a $2 trillion debt-ceiling hike, they'd make them live under a tight, sequester-enforced spending cap. Now Republicans are coming back, proposing to lift the cap in 2013 by 60%. But don't worry, they promise, it'll be cranked down further in subsequent years, to make up for this "one time" splurge.

This is why the tea party views GOP leaders much as Charlie Brown views Lucy holding the football.

The new version of Medicare reform is in some ways the most troubling part of Ryan's package. To the relief of many Beltway Republicans, he has moved left from last year's bill in an attempt to garner some bipartisan respectability and defuse the Left's vicious criticisms.

In doing so, he has unfortunately constructed what might be described as "RomneyCare for seniors": a government health care program featuring an individual mandate, a pseudo-market "exchange," and bureaucratic price controls.

Last year's plan would have converted Medicare into a competitive, voucherized system with no more 1960s style bureaucracy and price controls. That would have been a good reform, although we cautioned at the time that Republicans should also give seniors the right to opt out of Medicare altogether. (Medicare is currently compulsory. You have to join it, or forgo your Social Security benefits.)

Republicans haven't yet taken our advice on the opt-out, and I wonder if this isn't because of the influence of Governor Romney, who, as we know, favors an individual health care mandate, at least for Massachusetts.

Unlike last year's version, the new Medicare plan keeps the 1960s bureaucracy but tries to eliminate that bureaucracy's price-control meddling by forcing it to compete with private health insurance plans inside a government-run "exchange." This is why a lot of Beltway Republicans are describing it as "market-oriented" and so on. One problem, though: the Medicare bureaucracy will run that exchange -- i.e., the fox will guard the henhouse. Just like it does in ObamaCare.

And here's the rub. Despite his leftward movement, Ryan's new plan most assuredly will not cause the Left to stop accusing Republicans of "ending Medicare." So its political value remains to be seen.

One last point. The Ryan budget transgresses the Tenth Amendment by trying to impose a one-size-fits-all reform on the states in the area of medical malpractice liability. Tort reform is needed, to be sure. But the states already have the power to reform their tort laws, and many have done so with good results. The constitutional authority cited for this federal intrusion -- the power to regulate interstate commerce -- doesn't cut it, in the view of this armchair constitutionalist. (I'm speaking here of med-mal reform; product liablity reform may be a different case because of its more obviously interstate character.)

The plan will be marked up in the House Budget Committee this week and will come to the full House floor next week. We'll be putting out additional detailed information on this and competing budget plans.

All in all, the Ryan (and Romney?) budget would be a great improvement on the status quo.

But why should we settle for a merely good budget, when we can have a great one?

America would be much better off with the "Tea Party Budget" proposed by Senator Rand Paul -- a bold, princpled plan that would actually balance the budget in just 5 years. It would do what House Republicans have so far refused to let the valiant Paul Ryan do: namely, it would eliminate whole cabinet departments, reform Social Security and defense, and generally overhaul our federal government in keeping with the Founders' vision of constitutionally limited government.

That's the kind of budget we really need.