Through June, Congress has spent more than $5 trillion in FY 2020. There are three months left in the fiscal year, and the size of the next COVID-19 spending bill will easily exceed $1 trillion. Congress may spend even more because of the negotiations with House and Senate Democrats, who have their own priorities. Remember, House Democrats’ most recent COVID-19 package, the HEROES Act, spent nearly $3.5 trillion. Thankfully, the HEROES Act wasn’t considered in the Senate.

Still, as we’ve pointed out several times, Congress has already spent $2.4 trillion in response to COVID-19. The economic disruptions caused by the pandemic ravaged the economy, causing a 32.9 percent decline in gross domestic product (GDP). This was an unprecedented contraction in the economy, but the response to COVID-19 will eventually catch up to the United States.

Even before the economic disruptions and dramatically increased spending that came as a result of COVID-19, federal entitlement programs like Medicare and Social Security were on a path to insolvency. The Medicare Hospital Insurance Trust Fund, or Medicare Part A, is projected to be insolvent in 2026. The Social Security trust funds could be exhausted by 2031. When these trust funds are exhausted, benefits will be cut or Congress will have to make a transfer from the Treasury to keep them afloat to avoid the benefit cuts.

Some may say that Congress can simply borrow the money to finance its debt. Borrowing to finance deficits can increase interest rates, discouraging private investment. This can have the effect of reducing investment in the private sector as fewer loanable dollars are available for businesses. Large deficits will also increase borrowing costs, which means increased spending in future years.

This economic displacement has immediate real-world impacts that can be observed graphically via the continued devaluation of the dollar. As John Tamny likes to point out, a surge in the price of gold (which is presently at record highs, over $1,900 an ounce) isn’t as much about a change in the value of our favorite shiny yellow metal as it is an indicator that our currency, unmoored from any connection to real items of value, can now purchase less of it. A weaker dollar is a hidden tax on the wealth of every American, rich or poor, and will only further hamper our economic recovery.

Servicing the debt also has a budgetary impact, and that budgetary impact is growing. In FY 2019, net interest payments on the debt held by the public were $375.2 billion. For comparison, defense spending was roughly $676.4 billion, excluding spending exempt from the budget caps. By 2030, according to pre-COVID-19 projections, net interest payments will reach nearly $828 billion while defense spending will be $905.4 billion.

Net interest on the debt held by the public is a category of spending that too few are paying attention to, and it’s one of the fastest-growing categories of federal spending. Once the dust settles from the response to COVID-19, net interest payments will exceed previously projected budget levels. If interest rates rise, those payments will grow even more, potentially overtaking defense spending in terms of the share of the federal budget. 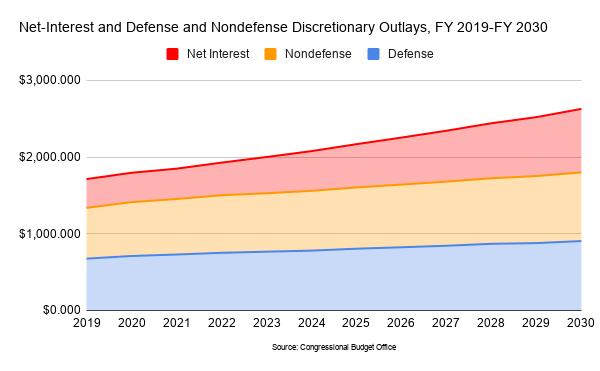 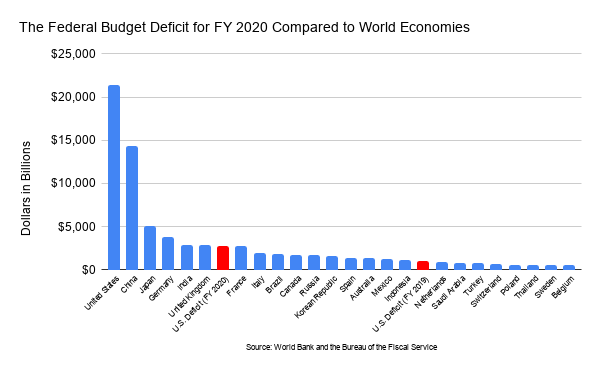 This level of spending isn’t sustainable. The budget deficit will likely decline in FY 2021 compared to FY 2020 as the United States begins to recover from COVID-19. However, the federal budget deficit will continue to be higher than previously projected, and at least some of the spending that Congress passed during COVID-19 may stick around. Of course, this doesn’t take into account changes in control of the White House and/or Congress and changes in policy priorities, which could result in higher non-COVID-19 spending.

We are rapidly approaching a point that we might begin wondering when, not if, the United States will face a sovereign debt crisis. Sadly, like the 2008 financial crisis, we may not know it’s happening until it's already upon us.